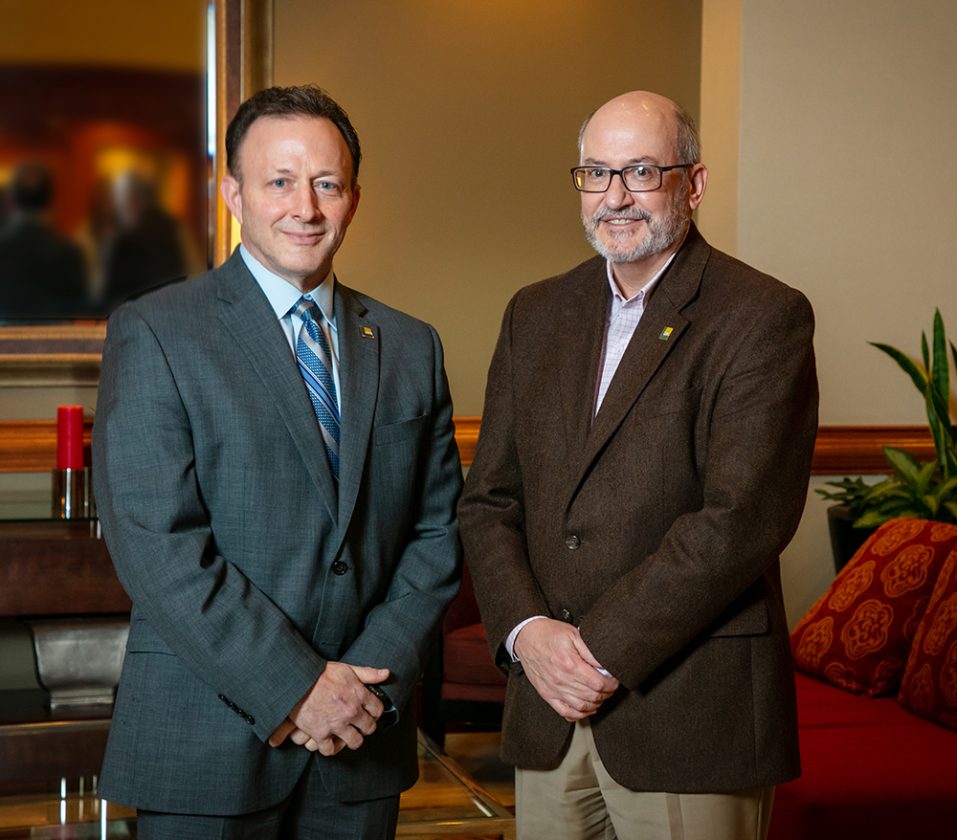 As Larson Design Group plans their growth into national recognition, the Williamsport-grown company now enters a new phase of leadership.

David Martin, LDG’s current president and COO, will now also be the CEO as Keith Kuzio transitions into a leadership adviser role.

“I’m grateful to have served LDG for the past 27 years, and David’s appointment represents a thoughtful and strategic two-year process by our Board of Directors to ensure that the core values and sustainable growth of our employee-owned company are maintained well into the future,” said Kuzio.

When LDG first began in 1986, the company only had nine employees, but they had big aspirations, said Kuzio.

“That was Ken Larson’s vision and that’s really what we focused on,” he said.

It was the design group’s involvement in the community that attracted Kuzio back to his home town, he said, where he eventually became president of the company.

“By that time we were over 100 people and under my leadership we decided to become an employee stock ownership company,” he said. “We decided that we wanted to expand our reach as well, between 2000 and 2012 we really focused on expanding our services throughout Pennsylvania.”

Bolstered by the Marcellus Shale industry, which took the area by storm, LDG decided to expand beyond Pennsylvania to become a regional company and opening offices in Pittsburgh and up-state New York, he said.

In the last 10 years the company has garnered some clients who were national in exposure and presence, “but our goal and strategies from the last 3 to 5 years has been building the team and the capabilities to truly become a national firm with many clients and to eventually develop an office network that is also truly national,” said Kuzio.

During his time as CEO, Kuzio increased net revenues by 325 percent.

Martin, who has now been with the company for more than 3 years, has also helped the company grow in that time, increasing revenues by 40 percent.

“I am proud of the depth of capabilities that characterize David and other members of LDG’s third-generation leadership team, and I’m confident that he is a great fit as a CEO who can take us to the next level based on his broad experience as an executive and strategic leader,” said Kuzio.

Martin has more than 30 years of experience in growing companies with his degree from Penn State University, among other accolades. He will run LDG at his Pittsburgh office but will retain an office in Williamsport as well.

“In the past run groups that are national in focus, about the same size or bigger in revenue or number of employees, I know what it takes to run the multiple offices it takes to have a national or multinational organization,” he said.

His experience in investing in growth by opening new offices, acquiring new companies by means of merger and familiarity with the federal government market space will work well as he moves into the CEO position, he said.

As he moves into the new leadership role, Martin said he wants to continue the success the company has had without plateauing.

“My goal is really to scale that success and look to create a national focus for LDG and expand beyond the boundaries of Pennsylvannia, Ohio, New York and West Virgina and look to develop a strategic plan that takes that North-Central Pennsylvania type of small business that we had and scale up to a national presence,” he said. “At the same time bring those core values the company started with and expand them to a national basis.”

Now as an adviser, Kuzio said the lessons the design group learned from their time as a small business in Williamsport, such as client service excellence, commitment to employees and employee ownership, and a commitment to share success with the community, will carry them into the future.

The directors and administrators have worked hard so that nothing will change for locals in the area, he said.

“The LDG board has had a truly thoughtful process as we utilized or implemented over the last two years, to prepare for this transition,” he said. “I would say that Dave has committed himself to getting to know the culture, community and the nuances of the culture to a point where I think he is very knowledgeable to carry that forward in a successful way.”

WASHINGTON â€” Signs of renewed activity are surfacing across the country as states gradually reopen economies and ...

Some of the millions of American workers laid off because of the coronavirus are beginning to face a tough choice ...