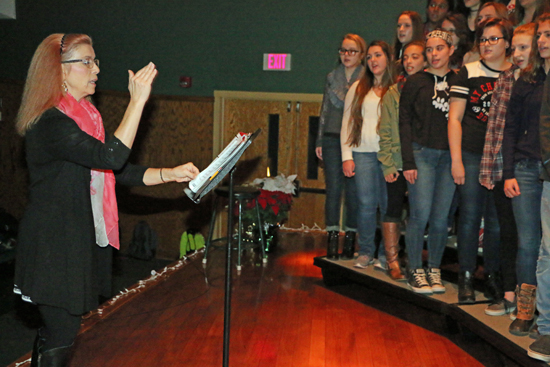 WELLSBORO — “I love music and I love kids,” said Judy Smithgall. As Wellsboro Area High School’s sole full-time music teacher, she is responsible for the school’s band and choral ensembles.

Her students constantly write “Music is Life” and “Life is Music” on the rehearsal room chalkboard, an important message she supports.

“If there is at least one class a day that students really love, they continue to attend school and graduate,” said Smithgall. “Music is fulfilling. That’s why it helps keep students in school.”

Music has always been an integral part of her life. She was born and raised in Delmar Township and grew up in the family business, Smiths Pianos & Organs, just five miles from downtown Wellsboro.

Her parents entered her in music competitions. “As a winner of senior division piano when I was 11 years old, I played in Carnegie Hall in New York City.” She won that award six years in a row.

Smithgall graduated from Mansfield University in 1977 with a music education degree, soon married, had two children and partnered with her parents in business. Through the store, she gave private music lessons in piano, organ, trumpet, violin, snare drum, etc.

Once her children were in school, Smithgall became a substitute music teacher in 1986 for Tioga County’s three school districts. By August 1987, she had her first full-time job in a public school working at R.B. Walter Elementary as a grade K-6 music teacher and for elementary chorus and band. From August 1988 through June 1993, she was the R. B. Walter Elementary and Williamson High School band director for grades 4-12. During those five years, her band students increased from 17 to over 100.

When Wellsboro music teacher Pat Davis decided to retire, Smithgall applied for the job. Selected from three finalists, she taught choruses in grades 5-12 and ninth grade general music at Wellsboro in August 1993.

Now in her 30th year of teaching and her 24th at Wellsboro, Smithgall is the high school chorus and band director. She became band director In August 2011 after the district cut two music positions to balance the budget — one at the middle school and the other at the high school.

Today, Wellsboro High has 493 ninth through twelfth grade students and 247 of them, just over 50 percent, are involved in a Smithgall class or musical group.

She works 11 hours a day Mondays through Fridays and can be found in school on weekends “trying to get everything done.”

Band and chorus are high school classes taken for credit toward graduation.

This year Smithgall has 228 students in the full chorus. For teaching purposes, the students are split into five chorus classes. There are sopranos, altos, tenors and basses in every one. Each class lasts 40 minutes and is held every other day during school hours. “The first time all five chorus classes rehearse together as the full chorus is the day before a concert,” Smithgall said.

The chorus students learn vocal techniques such as how and when to breathe, how to achieve good tone productions and how to sing vowels and consonants.

There are 51 students in the concert band class. It meets during eighth period in school every other day. Smithgall gives instrumental lessons as part of the curriculum. The students are required to learn major scales and play from lesson books, as well as learn the music the band will perform

“I try to make it possible for any student who wants to be in the band to join,” Smithgall said. This year, we have a foreign exchange student from Taiwan who plays the erhu, a two-stringed fiddle.”

He does not read standard American musical notations.

Band members and Smithgall have worked with him so he can write the notations he needs to play with the band.

“Teaching both chorus and band takes a lot of time,” Smithgall noting that rather than teaching a separate course, she has integrated basic music theory into her band and choral classes and rehearsals as well as the extracurricular performing groups she oversees.

They are: the jazz band with 20 members, the hand bell choir with 11, the Dickens Choir with 31, the men’s ensemble with 19 and women’s ensemble with 29. Smithgall expects her band and chorus students to learn how to read music, memorize it and then be able to play or sing it under her or another director’s guidance. “Music strengthens the brain and makes it easier for students to learn all types of subjects, from math to history,” she said.

“Band and chorus are like family,” Smithgall added. “Even though the choral students rehearse in five different classes, love of singing is their common bond.”

The band is even more like family. “First, band is a smaller group. Second, because they are in one class, they can spend more time together working on complicated band music and helping each other improve their instrumental playing skills,” said Smithgall.

Over the years, many of Smithgall’s students have been selected to compete at all levels.

This year, junior Maggie Brennan, an alto 1, was selected to attend the All-Eastern Chorus April 5-8 in Atlantic City.

Last year, after Brennan successfully participated in District 8, Region 4 and All-State Chorus, she submitted an application and was chosen from 13 states and Washington, D.C. to participate.

“Maggie is only the second female student I have had to be selected,” said Smithgall. “Many more male students from Wellsboro have been chosen for this honor than females.”

“There is a lot of talent in this town. That’s why I love working here,” Smithgall said.