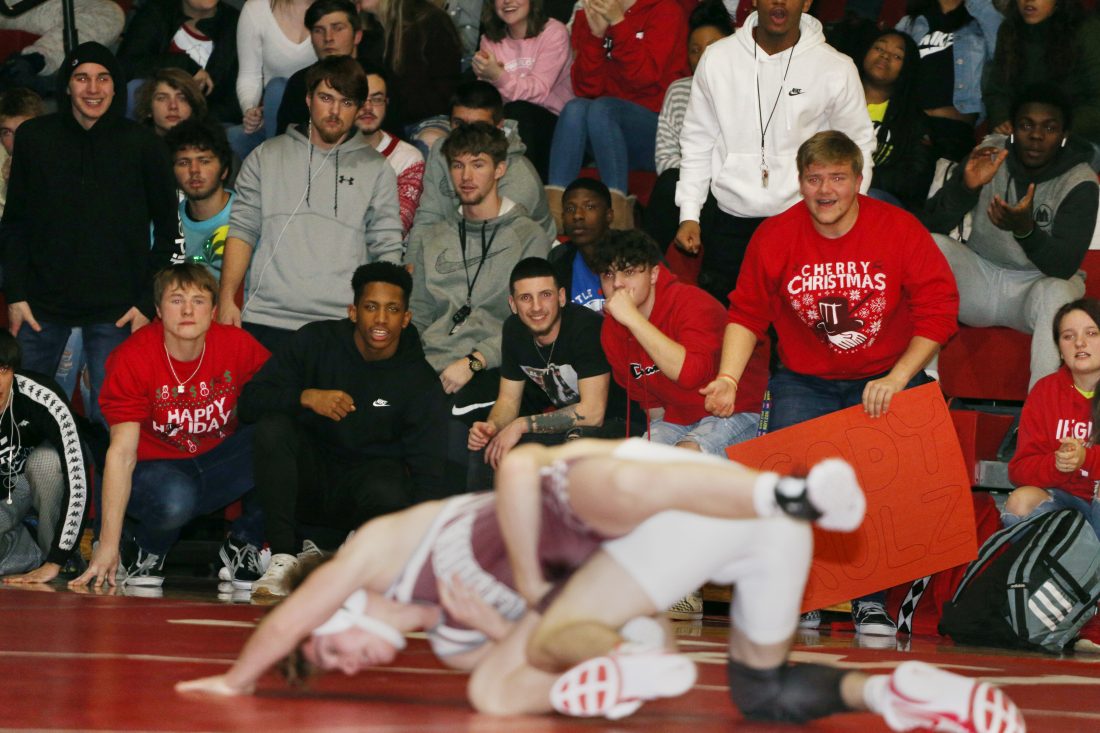 Three years ago, after traveling to Altoona the year prior to wrestle a match during the school day, Williamsport hosted Altoona at the Magic Dome before winter break.

This wasn’t just any wrestling match. It was an assembly for the entire student body. Recently, Williamsport hosted Altoona for the second time. The varsity teams battled it out at the Magic Dome and the junior varsity teams wrestled at the middle school gym.

This schoolwide event is the only one of its kind. Even when the wrestlers travel to Altoona, the entire student body does not attend. Some teachers do bring their classes down to watch the match. Some of the students stop in for a few minutes in between classes, but many of the students don’t see any of the match.

Everyone was involved. The band played, the cheerleaders performed, GQ and Les Chanteuses sang the national anthem, and students and faculty cheered on the wrestlers.

Our schools ran a modified schedule in order to fit the match in at the end of the day.

There is lots of excitement in the air that day already as it is the day before vacation and the classes are shortened. So by the time the students arrive at the gym, they are primed for the event.

It is quite amazing to witness the energy in the gym for this special event. Even though wrestling doesn’t typically have the following that football or basketball does, the students really get into cheering on their classmates.

Whether the students knew the rules of the sport or not, they definitely understood when our wrestlers were controlling the match, and they didn’t hesitate to make some noise. The crowd roared when our kids pinned their opponents or escaped from a precarious situation. But they were the loudest when a couple of our wrestlers picked up their opponent and returned him to the mat.

I didn’t know a lot about wrestling prior to the match, but I sat around some other people who did. They were quick to give us some lessons as we watched.

It didn’t matter if we had never really spoken much before, we were all in it together that day. And I think the wrestlers could feel it, too. They were wrestling for us as much as they were for the team.

“It was very fun and intense. I feel we should do more events like it with more sports, because it really brings the school together,” said sophomore Avery Campbell.

Our team won the match 39-28. But more memorable than the win will be the unity and camaraderie shared by all of us.