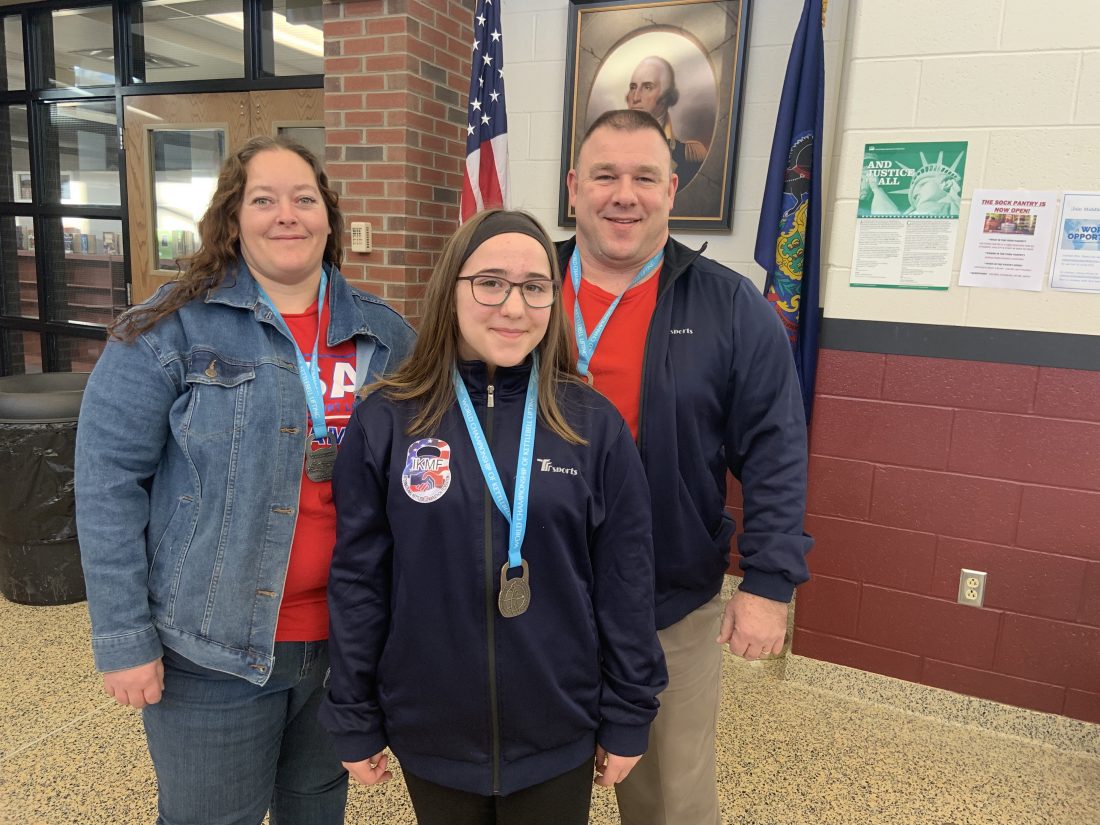 Endurance, determination and family. These are three things that three-time kettlebell gold medal winner Gianna Steele, sixth grade Loyalsock Township Middle School student, and her father and coach, David Steele, could tell you all about.

Over Thanksgiving break, Gianna and David traveled to Poland to compete at the national level for the Kettlebell World Championship, a repetitive weight lifting competition using cast iron or cast steel weights with a handle attached. Over 18 countries, pooling together over 220 participants, of which 50 were children, came together to compete in a variety of different challenges.

Competitors are separated into different weight categories according to data from a weigh-in preceding the competition. David and Gianna Steele’s competition of choice was a lift — each participant must lift the kettlebell over their head, bring it to their shoulder, lower it to the ground and lift it over their head once again. Competitors are allotted 30 minutes to do this action as many times as they can.

Gianna took her place with an 18-pound kettlebell and managed to lift 523 times in 30 minutes, a new personal best. David, using a 53 pound weight, lifted 559 times. David’s good friend Bridget Barto, a local kettlebell lifter, traveled to Serbia to participate in another kettlebell competition amongst 37 countries and 400 participants. With a 35-pound weight Barto managed to complete the lift 156 times in 10 minutes.

David and Gianna Steele and Barto received gold medals, and were glad to be champions at each other’s side.

The Steeles’ began kettlebell lifting when David’s trainers at Muncy Live Well Fitness center wanted to try something new with their members. After taking a class in kettlebell detailing the sort of exercise applications it offered, the trainers discovered the opportunity for interested members to compete at a national and competitive level. David and Barto began training almost immediately.

It has been a very addictive and rewarding experience, David said. When she was three years old, Gianna grew tired of only getting to watch her father and the others at the gym workout with kettlebells. She received a kettlebell dog toy to test the ropes, but she wanted the real deal.

Gianna’s training began with a 1-pound kettlebell and David, as her coach, focused on form and mechanics to maximize performance and reduce chance of injury. David compared his training with Gianna to that of Hall of Fame Major League Baseball pitcher Nolan Ryan, who David believed has also achieved so much in his sport without injury because of his impeccable form.

David and Gianna Steele’s accomplishments have taken many other forms besides their medals. Last December, Gianna was the youngest USA team member to win a gold medal and she was awarded the title of Honored Master of Sport, which she was honored to receive. David, as a certified kettlebell coach, was awarded “Master of Sport” the second highest honor one can receive. David is proud of his daughter’s achievement.

Looking to the future, David and Gianna Steele and Barto are all excited to keep traveling abroad to compete. However, in 2021, they are very excited to have the world championships held in the United States. Kettlebell associates are working to get the event in the 2024 Olympics, where Gianna could participate in the national competition. Gianna added “And… you guys can say, ‘Hey! I interviewed her!’ “

David is very proud of everything that he and his daughter have accomplished but continues to believe that the scale of her accomplishments is greater than what he has done because of her dedication and drive at such a young age. David and Gianna Steele’s future in kettlebell seems very bright and their achievements in life have surely prepared them for a successful and fun career.

— Lilley is an eighth grade student at Loyalsock Township Middle School. Student’s Story are published in the Education section of the Williamsport Sun-Gazette and are written by local students. To submit A Student’s Story or to learn more, email education @sungazette.com