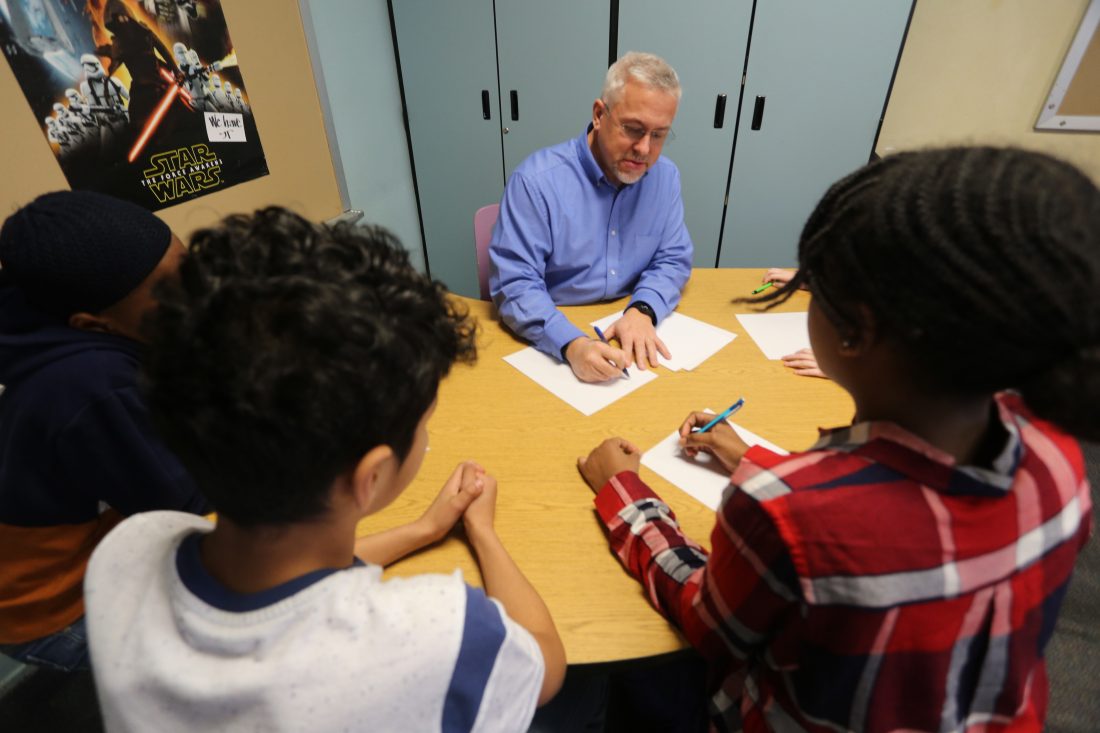 Since his senior year in high school, Trevor Enderle knew his plans were to major in elementary education.

Enderle, who now serves as an instructional math coach for the intermediate grade levels in the Williamsport Area School District, did go on to major in elementary education at Mansfield University and spent the first 17 years of his teaching career in a fifth-grade classroom. He credits some of the teachers he had when he was growing up in Tioga County with influencing his decision to follow that career path.

“I think it was because of some of the great experiences I had, of moments of learning, but also moments of growing as a person and a teacher was involved in a lot of those things,” Enderle said.

There was one teacher in particular who impressed Enderle and affected his career choice.

“As far as a teacher who influenced me, his name was Rich Frontino, he has since passed, but he was a teacher in the Northern Tioga School District where I attended,” he said.

“I am friends with his son and I’ve told his son more than once what an impression he made on me. Because he was a male in the elementary grades, which was unusual at that time and still is today. But also he handled situations, the way that he made the math and science subjects so much fun. Somebody I can look back on and say I’d like to emulate that,”

After student teaching in the Wellsboro area, upon graduating from college, Enderle headed south.

“I was very much a rural person. It was quite a step for me to come into a diverse community, such as Williamsport. Growing up in a rural area, my first placement was in Lose Elementary which was located right in the center of the town,” he said. “So it was a big adjustment.”

After being in the education field for 31 years, Enderle, who works with teachers developing programs and discussing curriculum and instruction, said that he has seen changes in the field from when he entered teaching in the late 1980s.

“We, as the population of educators, have become ever more aware of finding where our students’ strengths and weaknesses are through the various forms of assessment that we have, both casual all the way up to state assessments. We end up looking at these and pinpointing where areas are that kids need to strengthen or need to enrich,” he said. “We are becoming all the time, more and more aware of those points and I think the other piece is we’re making kids more and more aware of those points.

“I took some type of standardized test when I was in school. I couldn’t tell you how I did. There was probably a paper that went home, but we didn’t know. The amount of communication between students and educators about where they stand with things is in a far better place than it used to be,” he continued.

Enderle was quick to add that he is not advocating more testing for students, but that the tests that are already used should be of value for the students and teachers.

“The test for the sake of a test is not something I value,” he said, adding, “When we’re using those to better ourselves as educators, to better our students as learners, that’s when they have value.”

Coming from a starting place of one computer, which used a five and half inch floppy disk in the classroom, Enderle sees today’s technology as a plus.

“I see it overall as a positive. Having technology as an assist, not as a teacher, but as a supplement, is truly a benefit for us,” he said. When asked if students have changed during his time teaching, Enderle is quick to respond that although things were different when he began teacher, “overall, kids are still kids.”

“We have kids come to us with various array of needs. We had that in the ’80s too. We’re quick to say how different kids are, but kids still need their basic educational needs met. How we go about delivering (them), that’s changed,” he said.

After 31 years, Enderle says the variety of his job is what keeps him going.

“I’ve been someone who’s been very fortunate in being able to explore different avenues in education,” Enderle shared. “When I first came into the Williamsport Area School District I was a proud fifth-grade teacher and that’s all I ever wanted to do. It wasn’t until I was in my mid-30s that I decided maybe administration is the way I wanted to go,” he said.

“Then through either my own choices or through how things evolved in the district itself, where different avenues came up that when I looked at those I thought I might like to do that. I gave those a try and that’s how I got to the position I’m in now, which I enjoy very much,” he added.