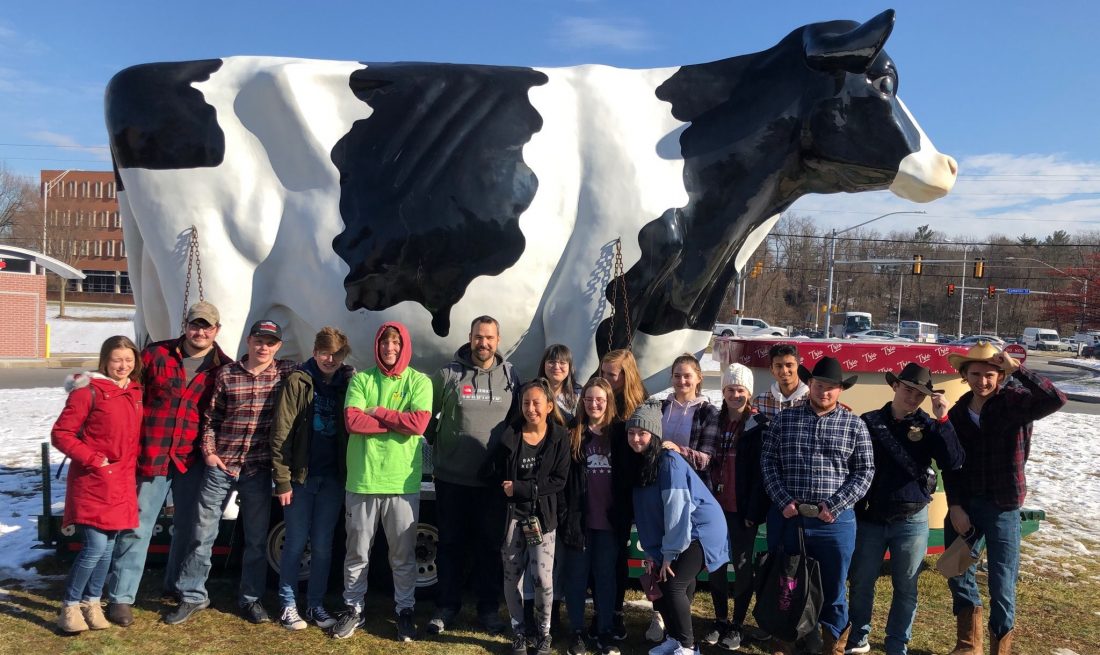 Although you might hear the phrase “farm show” and assume students would see exhibits similar to those at a county fair such as livestock competitions, bull riding or tractor pulls, the state Farm Show is much more than that. Sixteen junior and senior students enrolled in levels 2 and 3 of the biotechnology Career and Technical Education (CTE) program traveled to Harrisburg for the 104th annual state Farm Show with teacher Mr. Paulhamus and WAHS CTE director Matthew Fisher.

“It was a huge convention with lots of information on all aspects of agriculture. Farm equipment, farming techniques, hunting, food production and livestock presentations were the big focus of it,” Flock said.

This year’s was themed “Imagine the Opportunities” and encouraged visitors to consider a career in agriculture, which brings in an annual amount of $135.7 billion to the state’s economy.

People were selling products and you could buy everything from venison to knives, scarves to tractors and you could even get your boots polished. There where food and beverage-tasting booths and competitions as well from state associations including milkshakes by the Dairyman’s Association, goat barbecue by the Livestock Association, apple cider slushies by the Horticultural Association of PA and maple cotton candy by the Maple Syrup Producers Council.

Some students were surprised to see so many exhibits that pertained to wildlife at a farm show. There were even people from a farm where they raised deer. Some students spent time at the booth and learned about managing a herd of deer. The farm owners discussed everything from feeding the deer to providing habitats closely resembling ones found in nature. Chronic wasting disease is a dilemma that Pennsylvania’s deer population faces and was a topic of discussion.

Of course there were farm animals there as well. There were goats, sheep, cows, horses, chickens and pigs. Although some of the exhibits focused on more sophisticated and science-based details about farming, some exhibits were geared toward a younger crowd.

There were opportunities for children to see animals up close and personally. A highlight of the show was the calving station were there were demonstrations of live births. Unfortunately, no calves where ready to be born when Williamsport High School’s CTE students where there.

The Farm Show housed nearly 6,000 animals, 10,000 competitive exhibits and 300 commercial exhibits. The show gives a look into the agriculture industry, and shows how some of these animals are handled and go from farm to fork.

Some statistics included 16 calves born at the Calving Corner, 450 gallons of milk a day produced by cows and 24 college scholarships totaling $84,000 awarded by the Farm Show Scholarship Foundation.