A tour of the colon is an education 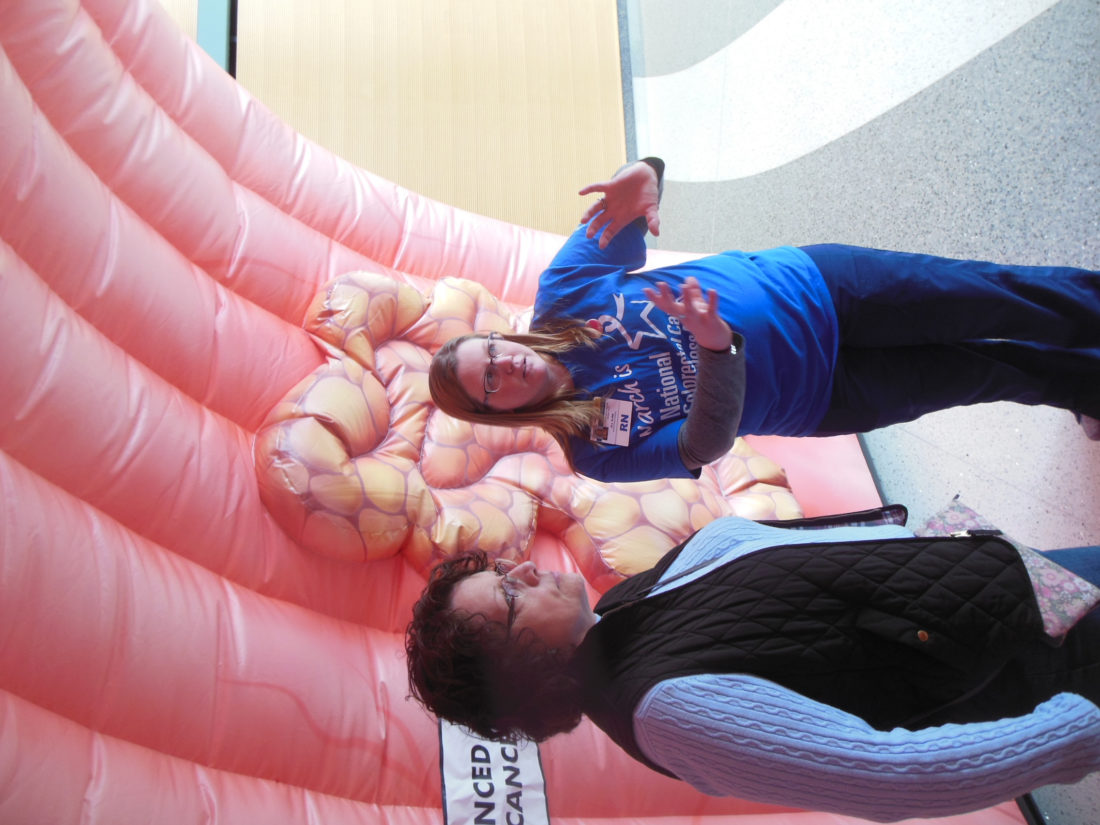 MIKE REUTHER/Sun-Gazette Cahy Shreppel, left, takers a tour of the inflatable colon at UPMC Susquehanna Williamsport Regional Medical Center as Jill Kline, a registered nurse, explains some of the signposts along the way.

Visitors to Williamsport Regional Medical Center may pause in their tracks at the site of the large inflatable just inside the main entrance off High Street.

But those who step inside the model of a human colon can learn something or perhaps even take the first stop toward saving a life.

On Wednesdays throughout the month of March, this facsimile of the large intestine is open for tours.

“I found it really interesting,” said Cathy Shreppel, of Jersey Shore. “It gives a view of something you really can’t picture.”

Every year, some 50,000 people in the U.S. die of colon cancer, according to Dr. Puneet S. Basi, of the UPMC Susquehanna Digestive Disease Center.

“We want people to become more aware of cancer,” he said.

The short journey through the inflatable intestine drives home the point of the importance of having a colonoscopy, the test considered the “gold standard” for screening for colorectal cancer.

Basi said colon cancer is the second leading cause of cancer deaths.

Much of the colon model is taken up by normal or healthy tissues. Other areas of the colon’s walls highlight some of the common medical issues that people experience in the way of non-malignant and malignant polyps, advanced colon cancer and Crohn’s disease — an inflammatory bowel disease.

Basi related the story of a patient, an otherwise healthy man in his early 50s, who successfully was treated for colon cancer after a colonoscopy revealed malignant growths.

“Colon cancer, if detected early, can be treated,” he said.

A colonoscopy probes the large intestine, from the rectum, through the colon to the lower end of the small intestine.

The procedure can find early signs of cancer in the colon and rectum, as well as diagnose the causes of unexplained changes in bowel habits.

Basi said people are becoming more aware of the need for a colonoscopy. More than half of colon cancers can be prevented with a screening.

Colonoscopies should begin at age 50 for most people. If a colonoscopy doesn’t detect adenomas or cancer and a person has no risk factors, another test is not recommended for 10 years.

The American Cancer Society recommends those with an increased or high risk of colorectal cancer to be screened before age 50 and/or more often.

African-Americans have the highest rates of both getting and dying from colorectal cancer, according to the Centers for Disease Control.

Among the risk factors for colon cancer are:

• Personal history of cancer of the colon, rectum, ovary, endometrium or breast.

• A history of polyps in the colon.

• A family history of cancer of the colon or rectum.