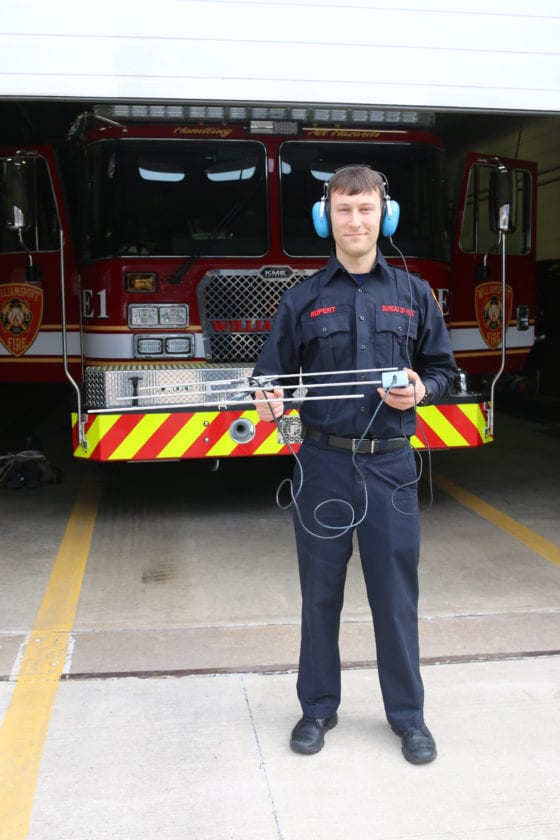 On a sultry, 90-degree summer afternoon an elderly woman diagnosed with Alzheimer’s tells her husband she’s going to sit on the porch but becomes disoriented and wanders her street. Wearing a long-sleeve shirt she walks down the sidewalk in the city glancing at the impending storm clouds. Her husband, noticing her absence, panics and calls 911. She is wearing a life-saving band from Project Lifesaver through Hope Enterprises. Williamsport firefighters respond to the call and find her six to seven blocks from home sitting hidden behind a 6-foot fence resting in the shade.

Hope Enterprises, which provides services to individuals with intellectual disabilities, teams up with the Williamsport Bureau of Fire to protect those with Alzheimer’s disease, dementia, autism, Down syndrome and similar conditions through Project Lifesaver.

“It is a misconception that it’s a GPS device,” said Anne Ohnmeiss, a quality assurance associate at Hope Enterprises. “It’s radio frequency based and is an insurance policy you hope never has to be used. Most people are found a couple blocks from home but that doesn’t negate the panic felt when a loved one is missing.”

James Baker, city fire engineer who narrated the above story, said, “The device is worth it’s weight. We were able to find an elderly woman in the 90-degree heat with the machine by narrowing down her location. It works!”

Project Lifesaver began in 1999 in Virginia and has saved over 3,000 people nationwide, according to Ohnmeiss.

“Every time a search has begun the person is found alive, normally within 30 minutes,” she said. “We started the program in Lycoming County in June 2007. According to the Alzheimer’s Association, 60 percent of individuals with dementia will wander. Of those still missing after 24 hours, only a third will survive. A 2012 study in the Journal of Pediatrics reported that 49 percent of children with autism wander from safe supervision, and 29 percent of those cases occur in a classroom or school setting. Cases involving children age 9 and younger have ended in death 42 percent of the time.

In December 2004, before Project Lifesaver began in the county, a 9-year-old autistic boy wandered from home wearing bedroom slippers and no coat. After four days the child’s frozen body was found a mile from his home, according to Ohnmeiss. “His death was the impetus for bringing Project Lifesaver to the county,” Ohnmeiss explained.

“Each client has their own radio frequency and all information on the client including medical information, address, a photo, and their nickname is kept on file at the fire station,” said acting Platoon Chief Kevin Hurne. “When we receive a call we use an antennae with ear phones at the last known location and scan the area until we hear a signal. There are about six calls a year.”

Ohnmeiss added, “The fire company has been an outstanding partner. Hope could not do this without their help and follow through. I can’t give them enough kudos.”

Hope initially started the program with the city police. Other area first responders that have Project Lifesaver tracking equipment include the South Williamsport and Tiadaghton police departments and the Loyalsock Fire Department.

Baker added that the station has a mobile unit as well that is mounted on a vehicle to scan a larger area. Firefighters change the batteries in the bands once a month and review a daily inspection sheet kept by a caregiver.

“We review changes in personality and if the person has tried to remove the band,” Hurne said. “The battery is like a watch battery but is specific to the band. Most are plastic bands but some are leather and the majority are worn on the ankle. It is a waterproof sealed unit. The battery could last longer but since it is life-saving equipment we want to keep it at an optimum level.”

“We have as many adults as children,” fire Chief Todd Heckman said. “It is quite extensive.”

county. To acquire a Project Lifesaver band contact Ohnmeiss at Hope Enterprises at 570-326-3745 or aohnneiss@hopeability.org.

Ohnmeiss records a physical description of each client as well as a photo online and once downloaded they instantly are in the program and the fire company is notified to place a band. Ohnmeiss added there have been up to 125 people in the program at a time.

“Some kids grow up and can understand and listen better,” Ohnmeiss said. “And we have seniors who enter locked senior centers or who pass away. Those involved do not have to commit for any length of time. We use a sliding fee scale based on a family’s income and the number of people in the family. I do not know of any insurance coverage.”

Funds for the program since inception have been from donations, Ohnmeiss said. In the past, donations were received from the Young Men’s Republican Club and the Rotary.

“In the beginning, those who didn’t pay balanced out with those who did,” Ohnmeiss said. “But now there are more who don’t pay a fee so our balances dip until we receive more donations to level out. We don’t have the finances to offer free units for all.”

“We don’t charge for the equipment upfront only the monthly fee,” Ohnmeiss explained. We lend the equipment with the intention that it will be returned.” Anyone willing to donate to the life-saving program can contact Ohnmeiss at Hope Enterprises at 570-326-3745 or aohnneiss@hopeability.org.