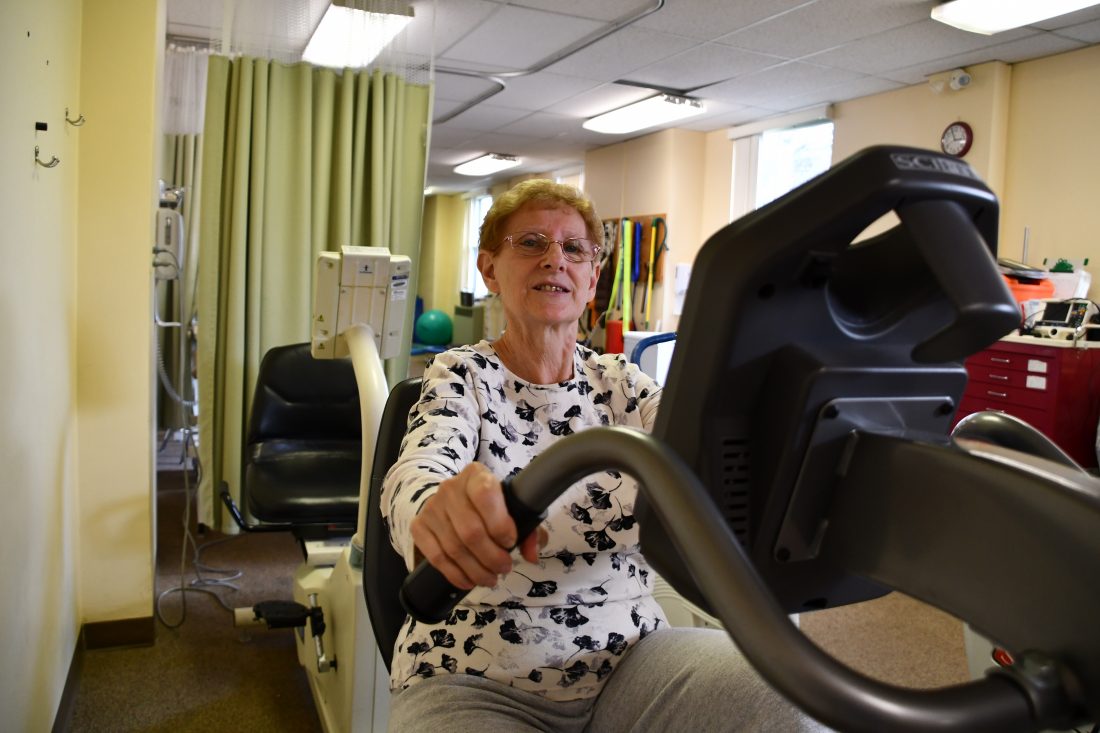 Cecelia Counsil does some cardio exercise as part of her regular exercise regimen.

As Cecelia Counsil was climbing into bed one evening, her chest felt tired and sore.

The 70-year-old resident of Jersey Shore continues to work three days per week at the Jiffy Market and tries to eat a healthy diet.

So this discomfort was notable.

“I had this pain, and I kind of surmised what it was,ã she said. “But I put it off.”

The next day, she went to Geisinger Jersey Shore for a routine check-up and mentioned the problem to her health care provider there.

It was recommended she go next door to the emergency room. They performed an echocardiogram.

“I said, ‘Is something wrong? I don’t feel right. I just don’t feel good,” Counsil recalled. “They said, ‘You had a heart attack.'”

From there, Counsil was transported to Geisinger’s main campus in Danville and underwent surgery to have two stents put in her heart.

Dr. Vishal Mehra, a Geisinger cardiologist, said it’s not uncommon for women to have a heart attack without realizing it.

“Women tend to not have typical symptoms, so they’re often missed or under-diagnosed,” he said. “We tend to think men are more at risk for heart attacks at a young age, but women simply don’t present the same way.”

He said women’s symptoms tend to include nausea, feeling lightheaded, or experiencing atypical sharp pains as in Counsilás case.

“People who have diabetes for a length of time may often have silent symptoms,” he said. “They don’t present the same way as in other people.”

In general, however, all people should take notice if they experience a sudden loss in physical ability. A person used to rigorous exercise shouldn’t become short of breath while grocery shopping, Mehra said.

Likewise, swelling feet, arrythmic issues or heart palpitations, shortness of breath while lying down, or dizzy spells should be taken note of.

“Lots can be done to help,” he said. “You have to have the right attitude to make changes and seek help.ã

But before any symptoms may pop up, three primary indicators point to risk factors for having a heart problem in the future, Mehra said.

The first is family history. Heart problems often are hereditary, and the genetic risk is an unchangeable factor, unlike the other two indicators, Mehra said.

“It’s really important to get specific information” on family history, he said, “especially if family members have had heart problems or heart attacks before age 45.”

Counsil noted her mother experienced a heart attack in her 50s and was prescribed medication at that time.

The second is diet: what kinds of food a person is eating.

Obesity, diabetes and other health issues affected by diet often are tied to an increased likelihood of heart disease.

“The kinds of foods that we eat have a huge baring on how much plaque we develop in the heart,” Mehra said.

The third also is diet-related: caloric intake versus output.

People should be eating “in moderation” and should get at least 30 minutes of exercise per day, five days per week.

The focus should be on getting the heart rate up, Mehra said.

“There’s no simple fix, no magic bullet,ã he said. “This has to be a wholistic lifestyle change.”

Since her surgery, Counsil has attended therapy to help strengthen her heart and regain her energy.

Once her therapy ends later this month, she said she plans to join a yoga class at her local community center and the Silver Sneakers program at the YMCA, she said.

In addition to developing a more active lifestyle, Counsil has changed her mind on how she’ll react if something like this ever happens again.