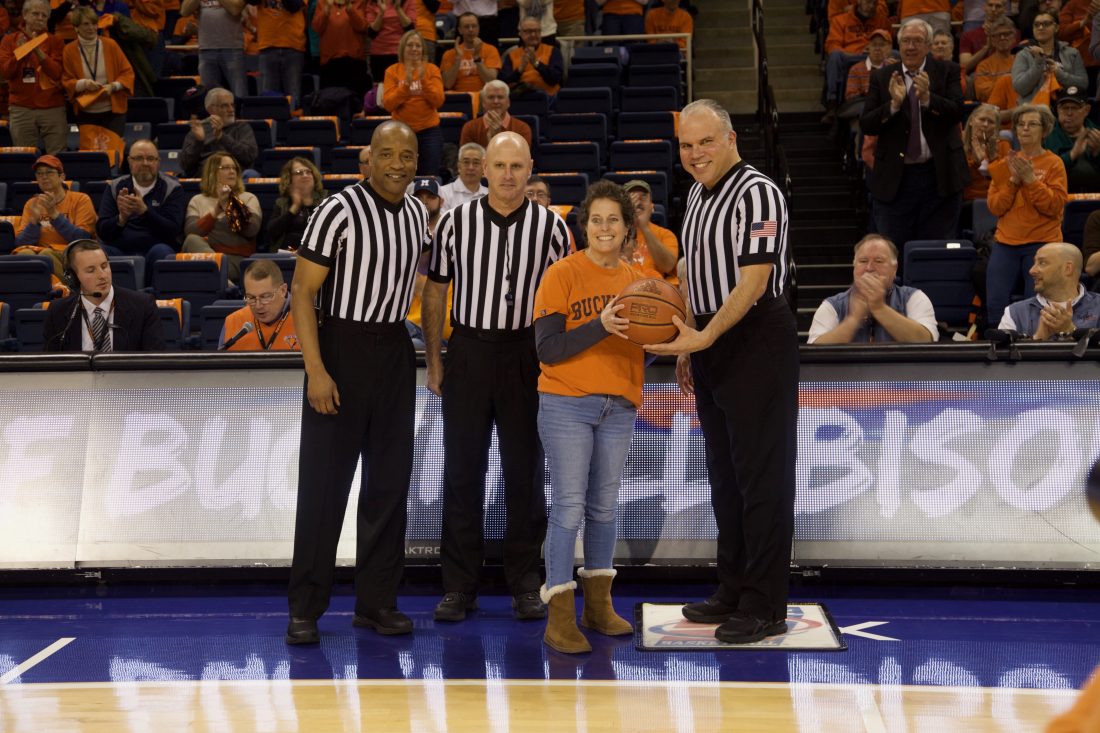 magine being told you have just days to live. Five days, specifically. You’ve got five days to get your affairs in order. Five days to say goodbye to family and friends. Five days …

What would you do?

For Andrea Hughey, 46, that day came on a Thursday. She was lying in a hospital bed when two different doctors told her just that.

“They told me I’d be dead by Tuesday,” Hughey recalled. “They said I should get my affairs in order.”

That was more than a year ago — in February 2018. This year, nearly a year to the day she was diagnosed with non-Hodgkins Lymphoma, Hughey stood before a cheering crowd on the court at Sojka Pavilion as Honorary Captain at the Bucknell Bison men’s basketball game vs Lehigh University.

It was an exciting moment for Hughey, who got to hand the game ball to officials before tip-off, not just because she is a huge fan of the team, but because she could finally put her year-long nightmare to rest.

“I was super excited (to be Honorary Captain) – I may have even told some strangers about it,” joked Hughey.

Hughey was chosen as Honorary Captain by the American Cancer Society after being nominated by a friend and fellow Bison fan, Jen Bernstein.

“I have known Ande for years,” said Bernstein. “Through my connections with the ACS and local involvement with Relay For Life, I was approached with this opportunity to sponsor someone for the Colleges Against Cancer game on Feb. 11. I could not think of a person more deserving.”

It was ironic, said Bernstein, that the game fell on the one-year anniversary of her diagnosis.

“Thanks to social media, Ande’s story was been shared by family and friends across the country,” said Kelly. “I have been overwhelmed by the generosity of others, from financial giving, meals, hugs, and tons and tons of prayers.”

To look at where Hughey was a year ago and where she is right now is “nothing short of a miracle,” said Kelly.

“Doctors told her she had no hope,” continued Kelly. “It was such devastating news to hear. So for us, her family, we were thrilled to see her get this exciting opportunity. It involves two great things: Bucknell basketball and life.”

Hughey became a big Bison basketball fan after Kelly of Lewisburg, started inviting her to games about 10 years ago.

“We have traveled to many Bucknell away games and even been to a few NCAA tournament games together too,” said Kelly. “We always joke that some people spend their winters in Florida … Ande spends hers in Lewisburg.”

Her love of the team brought Hughey more than just friends to talk basketball – it brought her friendships that would help sustain her through the toughest year of her life. Those friends never doubted Hughey would beat the disease.

“When I heard she had cancer and knew the struggle she was going to go through, it quickly became apparent she was going to beat this due to her positive attitude and her amazing support network who rallied around her,” said Bernstein. “What I know of Ande is that she is a kind and genuine person who is so deserving of this honor.”

Hughey’s fight against cancer happened during last year’s Men’s Bucknell Basketball season and being an avid fan, Hughey did not want to miss the season.

“She stayed as connected as she could while going through treatment no matter where she was physically,” said Bernstein.

Where she was, physically, was not good.

It was Valentine’s Day 2018 when Hughey was diagnosed with non-Hodgkins Lymphoma after a cough – what she believed to be a simple case of bronchitis – landed her in the emergency room.

“I was there for the majority of the day just waiting,” she remembered. “Finally the doctor saw me and ordered a chest X-ray.”

Her life would never be the same.

“They found that my left lung was completely collapsed,” Hughey said. “It looked like a lima bean in a pool of black – there was a mass the size of a football under my sternum.

The doctors drained a substantial amount of fluid (about five meters) that day, and did a biopsy that came back as non-Hodgkins lymphoma.

Not one to typically sit back and do nothing, Hughey found herself doing just that.

“Normally I am the Queen of Google,” she joked. “But to this day I’ve never Googled what I had. It’s very unlike me, but I have not researched it at all. I didn’t want to know anymore. I just didn’t.”

Hughey was admitted to the hospital. She has no recollection of beginning chemo. She doesn’t remember much of anything from that entire week, in fact. That’s because the chemo had caused frantic nerve paralysis, the tumor had wrapped itself around her diaphragm and caused her to essentially “freak-out.” She was intubated, put on a ventilator and taken to the intensive care unit where she remained for a week.

That’s when she found out that her body was not rebounding from the chemotherapy the way it was expected.

“Most people are eight-10 days rebound for chemo,” she explained. “So that’s when they told me I would be dead by Tuesday.”

Hughey did what she was told. She called her father. She began to write her will. She planned her funeral.

But within a few days, things had begun to turn around.

“We found out I am a 12-14 day rebound person,” said Hughey. “On Saturday, my white cells began to increase.”

Hughey later was transported to UPMC Shady Side in Pittsburgh. For two months in the spring she went through a cycle of treatment that included chemo for five days straight, 24 hours a day, then off for about 21 days.

“Some days were better than others, but in all honestly, I never thought I was gonna die,” said Hughey. “I may have questioned it, but I always thought I was going to get better.”

Throughout the next several months Hughey would go from being intubated to being on a ventilator. She had to learn to breathe again. She was moved closer to home, back to Geisinger Medical Center, once she was stable. She remained there until June 11, 2018, while she continued to learn to breathe and eat on her own.

“I had to learn to eat a certain way and to swallow a certain way because I was on a feeding tube for months,” she explained. “I couldn’t even talk because I had a talk valve.”

Finally, in June, she finished chemotherapy. A subsequent PetScan revealed the cancer wasn’t quite gone, so she was forced to endure radiation treatments, but she was grateful to be able to go home and get her treatment in Lewisburg. Then, on Nov. 5, 2018, Hughey learned that she was cancer free.

Hughey’s friends and family, though, give her much of the credit for surviving.

“(Ande) is definitely a strong individual,” said Kelly. “She is physically strong, independently strong and has strong opinions. She is a fighter.”

“I credit God for her healing,” said Kelly. “For me this is a modern-day miracle. Early on, doctors gave her zero hope. God used that spitfire spirit, that ‘never say never’ personality of Ande’s, that ‘You tell me I can’t make it and I will fight even harder’ attitude to heal her.”

Hughey says she is grateful for the support of her family and friends as well as her employer and her boyfriend, John Hall, who cared for her when she returned home.

“My family made sure there was never a day that I was ever by myself,” she said.

Her coworkers and boss at HorsePower Harley Davidson in Loyalsock Township were, she says, “awesome.”

“I can’t say enough about them,” said Hughey. “I am very fortunate to have great insurance and great employers. That was one thing I didn’t have to worry about or think about while I was recovering.”

As the months continue to pass, Hughey continues to work hard at getting her life back.

“My body is still a little broken and I don’t have the stamina I used to have,” she said. “But it’s coming back.”

Her friends, family and fellow Bison fans are grateful.

“I cannot imagine a basketball season without this fantastic lady and her witty comments,” said Carmen Terry. “Her fighting spirit is amazing.”