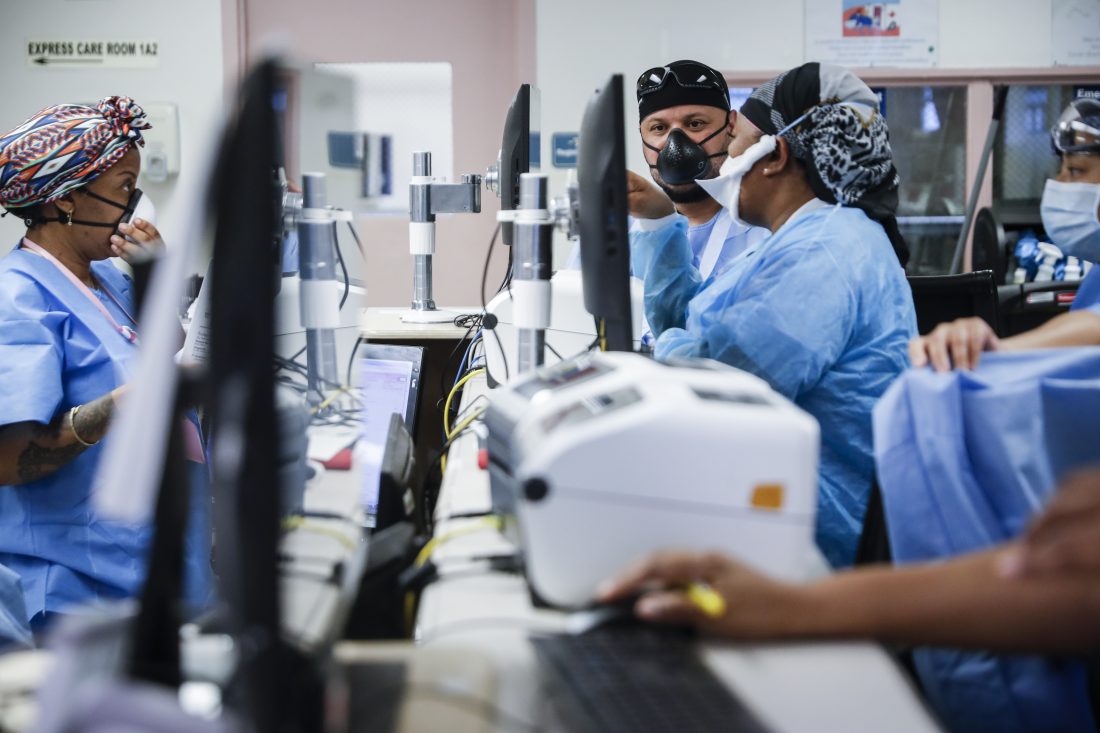 Medical personnel work in the emergency department at NYC Health + Hospitals Metropolitan, Wednesday, May 27, 2020, in New York. At hospitals around the country, nurses, doctors and other health care workers are reckoning with the psychological toll of the virus fight, coupled with fears that the disease could flare anew later this year. (AP Photo/John Minchillo)

NEW YORK — Outside a back door to a hospital where the coronavirus hit like a hurricane, a half-dozen staffers gathered recently to look back, and look inward.

“I am still scared,” Dr. Gwen Hooley told her colleagues at Elmhurst Hospital, which was swamped with patients in late March as the virus rampaged through New York.

Physician’s assistant Diane Akhbari recalled her husband leaving food on the cellar stairs while she isolated herself for months for fear of infecting her family: “I felt like an animal,” she said, her voice cracking.

Co-workers talked about how terrifying it felt early on, not knowing whether they’d have enough protective gear. How one endured his own case of COVID-19 and others saw young and healthy people like themselves get critically sick. How colleagues discussed drawing up wills.

And how haunting it is to think it may all happen again.

“I feel like it’s a calm before a second storm,” said Hooley, an emergency room physician who lost a relative to the virus.

While the global pandemic hasn’t abated, the days when gasping patients arrived at Elmhurst nonstop, when ventilators ran low and deaths so high that a refrigerated morgue truck was stationed outside, have subsided. Not necessarily the pain.

At Elmhurst and hospitals around the country, nurses, doctors and other health care workers are reckoning with the psychological toll of the virus fight, coupled with fears that the disease could flare anew later this year.

“There’s this overarching feeling of ‘Is the next shift going to be the shift where there’s 200 people in the waiting room again?'” said Dr. Samantha LeDonne, an ER physician. “You still can’t enjoy the calmness or feel like you’re at normal when you have that in the back of your head.”

Health care workers have been cheered as heroes in the virus crisis, and some have found the challenge and teamwork deeply meaningful. But the work also has been exhausting and traumatic, even for people accustomed to a life-and-death job.

A study of 1,200 Chinese hospital workers found half reported symptoms of depression and 44% reported signs of anxiety amid the coronavirus outbreak there. The United Nations said frontline healthcare workers faced “exceptional stress” in the pandemic, and that ensuring their mental health is critical to the world’s recovery.

In places where the virus raged, hospital staffers say they were broadsided by the sheer, shocking volume of serious illness and death. As healers, they felt the pain of not being able to offer a cure, while pushing through their own concerns about contracting the virus. They mourned relatives and colleagues and bore the weight of seeing patients suffer and die without the comfort of loved ones because of bans on visitors.

After six years as an intensive care nurse, Angelyn Bannor was conditioned to patients dying sometimes. But “this was beyond,” she said.

“I couldn’t handle it. It’s not physical, but emotionally, it was very hard,” said Bannor, who works at Metropolitan Hospital — like Elmhurst, a New York City public hospital that had a heavy coronavirus caseload. She has looked for solace in prayer and in tearful phone sessions with colleagues.

For now, the virus’ surge has given way to an uneasy quiet.

“The adrenaline wore off a bit, and it was like, ‘What did we just go through?'” says Dr. Eric Wei, an ER physician who also oversees quality-improvement initiatives for city public hospitals. “We’re still in that grieving, recovery phase, but also, we know that time is critical before the next mini-surge or before the next peak.”

There’s nothing unusual about distress or anxiety following an upsetting experience, psychologists note. Most people work through the feelings in a few weeks.

But there is concern that some who cared for COVID-19 patients may develop post-traumatic stress disorder, a longer-term and more disruptive condition.

Witnessing death and feeling exposed to life-threatening risk repeatedly in a single workday can have prolonged effects, said New York psychologist Paula Madrid. She’s working with about two dozen health care professionals who are grappling with sleeplessness, edginess and other reactions to the pandemic.

She encourages them to see their experiences “for what they really are, which is going through something that no one is really prepared for.”

Elmhurst staffers have been trying to help each other see that, too, with support from hospital management.

They share thoughts at “debrief” sessions, like the recent one by the back door. A special break room is staffed by a social worker and decorated with thank-you notes from around the country. Another room quietly pays respects to several colleagues who died of the virus.

Some have taken initiative from loss. After losing her father and a brother to the virus in her native Spain, pediatrician Dr. Pilar Gonzalez organized a hotline to help families of Elmhurst patients get updates on their infected loved ones.

Other staffers aren’t inclined, or ready, to examine how the virus affected them, said Dr. Suzanne Bentley, an ER physician who helps lead Elmhurst’s efforts to foster emotional support among staffers.

“There’s a certain fear that when you let that all out, you’re never going to be able to put that back in. And the reality is: We still need to put on our brave faces and our clearest thoughts and deal with the remaining patients … compounded with the fear of the next wave,” Bentley said.

But “there’s so much power in just coming together and saying, ‘I see you, and this is hard. And you feel how you feel, and that is exactly how you should feel.'” 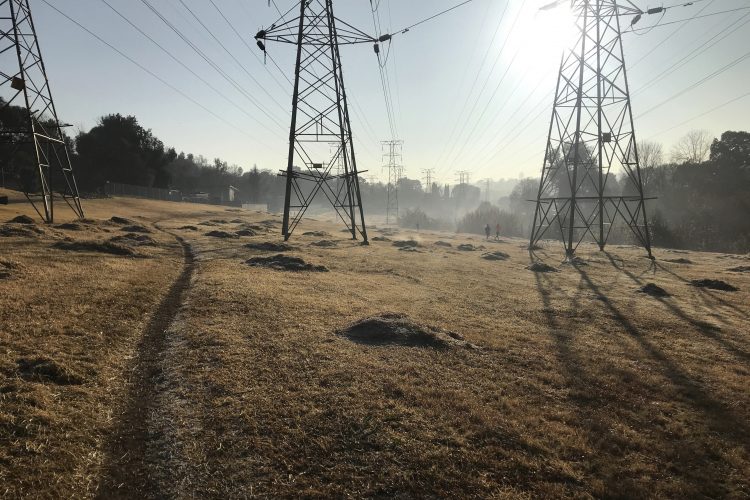 Trying to work while the mind works against you 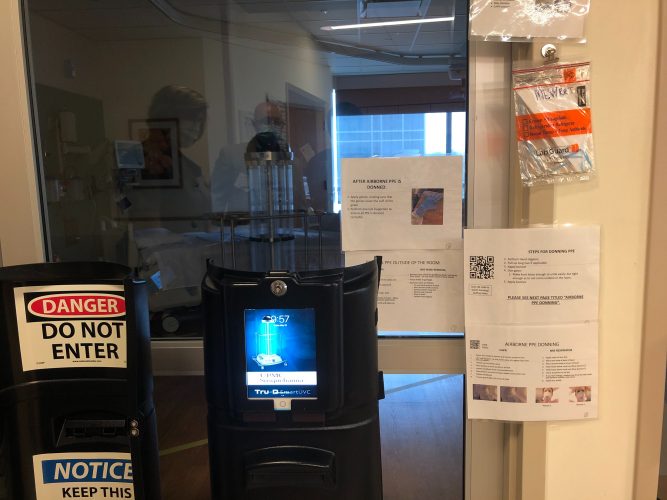 Urologists at UPMC Williamsport are offering a new minimally invasive treatment option for men diagnosed with ... 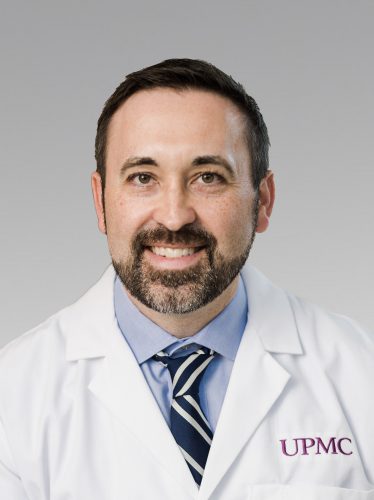 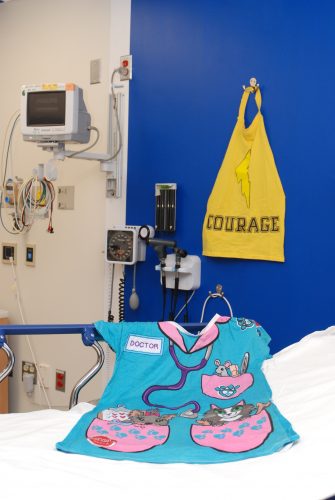 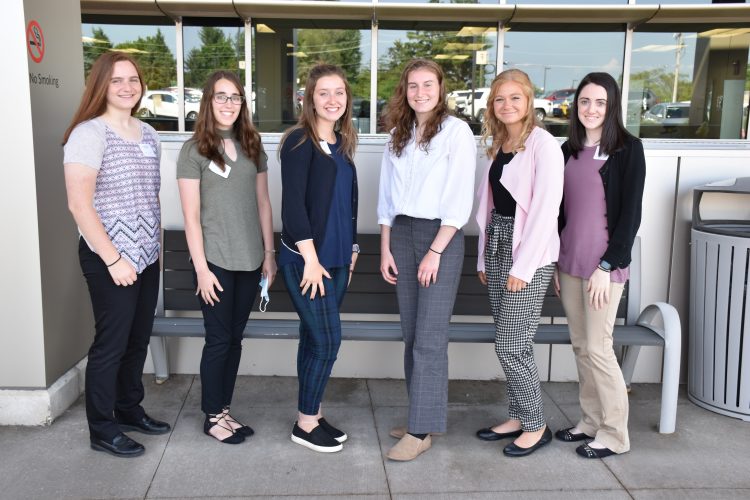