Readers respond to photos from 1959 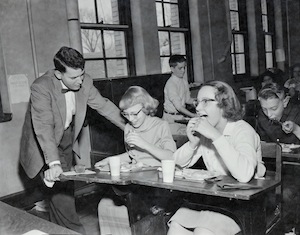 Two readers called in this past week with more information about two of the photos on Wednesday’s History page.

Gail O’Brien, of Williamsport said she recognized the picture of men inspecting yarn at an area factory. She used to work at the Plankenhorn factory in the 1970s when it was on Mill Lane. It subsequently moved.

The machine behind the men, which she said was called a Cobalt machine, would automatically braid ribbon, rickrack, and other items.

The few women who were employed there — O’Brien said it was a small operation — were hired to replace the spools of yarn.

Another photo showed students in a school cafeteria. Kurt Henry, of Williamsport, said he recognized a girl in the picture.

Carol Wurster, the girl at right, was shown enjoying lunch in what he believes to be Cochran Elementary School, considering she lived in the Vallamont neighborhood.

Her father was Dr. Clyde H. Wurster, superintendent of the Williamsport Area School District, and her mother, Grace Wurster, was a school teacher, Henry recalled.

Carol Wurster was less reserved than her parents and enjoyed having fun in church at the Third Street United Methodist Church, where Henry said he first met her.