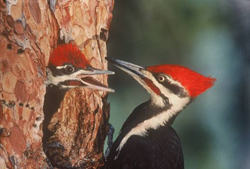 PHOTO PROVIDED The pileated woodpecker is one of the largest and most striking birds in the forest.

Several weeks ago while driving up the Armenia Mountain road, near Gobbler’s Knob, I saw a big bird fly across the road and land on a tree. Before getting close enough to identify the bird, I knew it was a pileated woodpecker due to its unusual flight.

A woodpecker’s flight undulates, which is much different than a crow’s straight flight path. A woodpecker will flap its wings several times, rise slightly and fold its wings against its body, causing the bird to dip. Most woodpeckers display a smooth rising and falling while in flight.

The pileated woodpecker is one of the largest and most striking forest birds on the continent. It is almost the size of a crow, colored black, with bold white stripes down the neck and a flaming-red crest.

Although it might not be seen while in the woods, it can be heard whacking at dead trees and fallen logs in search of its main prey, carpenter ants. The unique rectangular holes left in the trees offer crucial shelter to many species, including swifts, owls and wood ducks.

The pileated woodpecker’s scientific name is Dryocopus pileatus. The genus name dryocepus comes from two Greek words: drys, meaning tree (especially an oak) and kopis, meaning cleaver (a tree cleaver or wood cutter). The species name pileatus is Latin and means capped or crested, in reference to its large crest.

Both sexes have red crests and, if perched, a solid black back is shown. When the ivory-billed was perched, white was shown on the lower half of its folded wings, with two white stripes down the back.

Pileated woodpeckers have large black bills, with the male having a scarlet mustache extending from the base of the bill rearward to more than one half the length of its head.

Of course, the ivory-billed woodpecker’s bill was ivory-colored; hence, its name.

While in flight, white patches can be seen on the front half of the pileated’s wings.

After a pair has set up a territory, the call will be a wick wick, wick, wick, which is much louder. This same call is given when flying to a roosting hole.

The pileated woodpecker drums on dead trees, with the female drumming less than the male. Drumming is done at night when the birds are about to roost and also is used to advertise territory and attract a mate.

Pileated woodpeckers are year-round residents, and mated pairs appear to occupy the same territories year after year. Each member of the pair will dig and use its own individual roosting cavity that is not far from the nesting cavity. The birds usually enter their roosting hole about 30 minutes before sunset and leave before sunrise.

Pileated woodpeckers eat about 75 percent animal food and 25 percent vegetable matter. During the winter, they feed heavily on carpenter ants that live in the forest trees. Their powerful bills chisel out the wood and strip the bark from dead trees to feed upon wood-boring beetles.

During the summer, their diet consists of acorns, beechnuts and most other seeds; in the fall, they feed heavily on insects.

The breeding season is during March and can take 30 days to complete. At this time, the pair builds their nesting cavity, usually in a dead tree in a shaded area. The nesting cavities are excavated by both sexes, with the female doing most of the work.

The female lays three to four white eggs, and both sexes incubate the eggs. After 18 days, the young hatch out; the male broods the young overnight, while the female sleeps nearby in her roosting hole.

Both parents feed the young by regurgitating food through their long bills, which are inserted deep into the throats of the young. Later, the young are fed whole insects. After four weeks, the young leave the nest; however, they will continue to be fed by the parents. The family will stay together through September and possibly late fall.

After the young disperse, they will move about 20 miles from their parents’ home range.

Pileated woodpeckers have been trapped, banded and then released. Their life expectancy has been determined to be about nine years in the wild.

RAUCHTOWN — After approximately a year of working with Crawford Township Supervisors to insall a tower within the ...

The Pennsylvania Lumber Museum will host Snow-Mobility Weekend Friday, Saturday and Sunday from 9 a.m. to 5 p.m., ...

Environmental officials to meet with residents

Marcus Kohl, regional director of the state Department of Environmental Protection and program staff will meet with ...

LOCK HAVEN — Following the lead of their predecessors over the last 22 years, the Clinton County Commissioners ...