‘Feather’ report: Cold with a chance of snowys 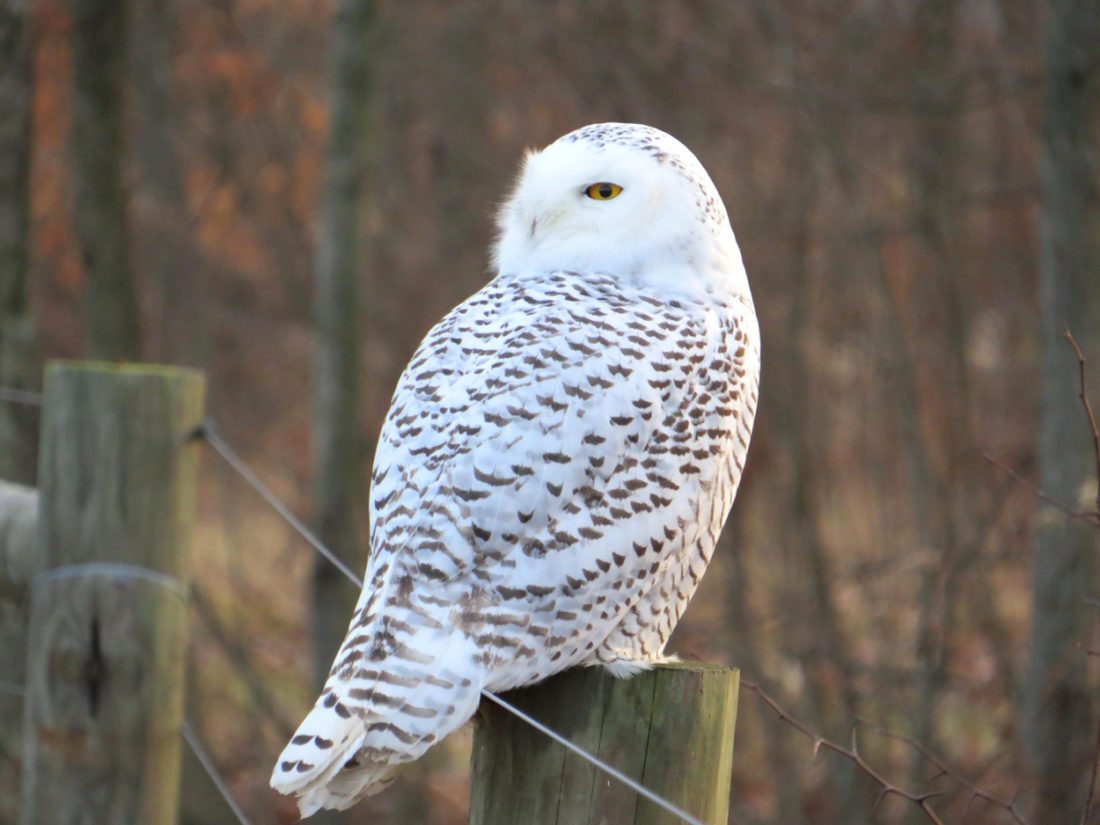 PHOTO COURTESY OF WAYNE N. LAUBSCHER A snowy owl perches on a fencepost.

No, this is not a weather report; it’s a “feather” report from this past winter.

Birdwatchers will recall the winter of 2013-14 when an unprecedented and historical southward irruption of snowy owls — big, white birds from the great white north — occurred into the United States and southern Canada. Thousands of owls arrived, starting in early December and peaking in February.

The Great Lakes and northeastern U.S. hosted most of them. In Pennsylvania alone about 209 were recorded, with the actual number estimated to be around 350.

This past winter turned out to be a familiar reminder when again snowy owls started showing up in the U.S. and southern Canada in noticeable numbers. Not nearly as large and widespread as the 2013-14 irruption, this winter’s was nonetheless quite noteworthy.

In Lycoming County alone, at least six owls were reported from several areas. In addition, several more birds were seen in Clinton, Centre and Union counties.

What often causes this for some avian species is a year of low food and prey availability coinciding with a high number of individuals. For a long time, the same was believed for snowy owls.

This new tracking technology allows researchers to follow owls on a daily basis giving latitude, longitude and altitude numerous times each day and night. The units are attached in a way that does not interfere with the owls’ movement and normal behavior.

What researchers learned from Project SNOWstorm and studies on snowy owls on their breeding grounds in the Arctic is that their irruptions usually are not caused by low prey availability, but just the opposite. In the Quebec Arctic during the breeding seasons just prior to irruptions, huge numbers of lemmings, voles, ptarmigans and other prey caused parent owls to lay large clutches of eggs, resulting in large broods of young birds that survived because so much food was available. Most of these young owls later moved south.

The youngsters weren’t starving and were generally in very good condition with good weight. However, many snowy owls perish due to vehicle and aircraft collisions, rodenticide poisonings, electrocution on utility lines and, rarely, shootings. Owls rarely found to be starving have underlying causes, such as injuries and illnesses.

Interestingly, a snowy owl that received a transmitter on Assateague Island, Maryland, this past January made a brief visit north to Clinton and Union counties in February for a few days. It was seen by several persons and is doing well.

For more information, go to projectsnowstorm.org.

Laubscher, a Clinton County resident, is an accomplished bird watcher and a member of the board of directors of both the Lycoming Audubon Society and the Pennsylvania Society for Ornithology. He is a federally licensed bird bander and regularly bands various species of hummingbirds and owls.

The Lycoming Audubon Society is a chapter of the National Audubon Society with responsibility for members in Lycoming and Clinton counties. Information about the society and events can be found at http://lycomingaudubon. blogspot.com. The public may share local sightings and join discussions at https://www.facebook.com/ groups/lycomingAudubon.