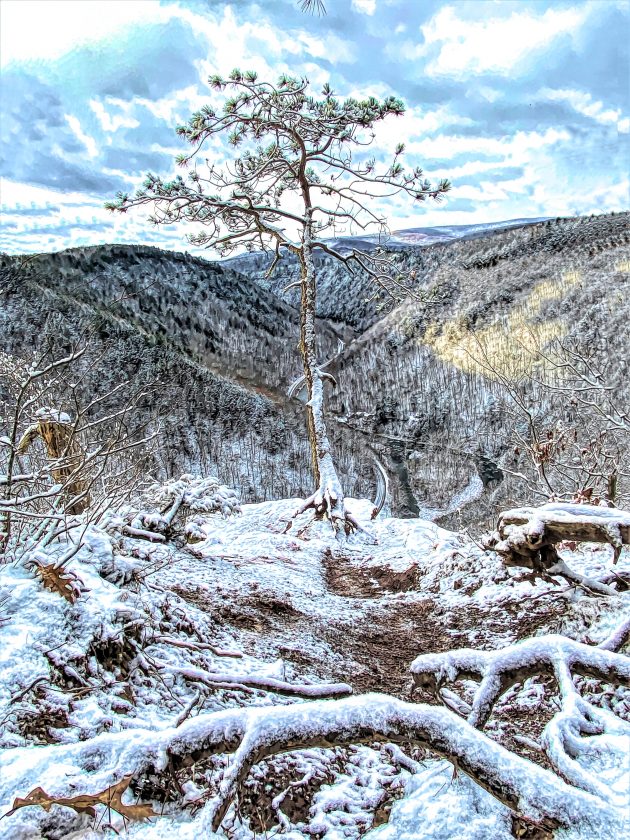 What did you do to celebrate the first snow of the 2019 season? I took a walk in the woods, a glorious walk to one of the most beautiful places in the northern tier of Pennsylvania. It’s the PA Grand Canyon, also known as the Pine Creek Gorge, not far from Wellsboro. Because … Because it was the first snow and I always celebrate this amazing event every year. Because I am blessed with being healthy and can. Because its simply good for the soul.

Come along and feel the magic

There are two state parks in Tioga County that stand on opposite sides of the rim of the Pennsylvania Grand Canyon. Iconic Pine Creek runs through the gorge, along the base of the mountains that steeply climb above it. Pine Creek is known for its beautiful trout waters by summer and as a white frozen snake of a river by winter. It is always beautiful. And it is often dangerous for its power and remoteness.

Leonard Harrison State Park is the better known of the two parks. It sits on the east rim of the Pine Creek Gorge.

There a small gift shop there and an educational exhibit room for folks to stop by.

The entrance to the lookouts goes past the building and through a grove of rhododendron bushes.

At once stunning, no matter what time of year you visit, the stone paths lead visitors past long vistas of the gorge and eventually to a lookout that perches on the side of the mountain.

The lookout provides a 360 degree view of your surroundings. In fall, the view from the lookout is magnificent with its multicolored oranges and yellows throughout the vast Tioga State Forest.

This time of year, in the dead silence of winter, its just as stunning. Maybe even more so. But with the cold temperatures and the stiff winds at the overlook, its brutal so dress warmly. And those stone paths and steps on the way there are often icy.

The park is always open for hardy visitors, though officially the sign warns folks that the welcome mat is out with caution. Wear ice cleats on your shoes for the sturdiest walk to the lookout.

And please don’t venture away from the official lookout areas.

There are several trails in the park, but all are closed for the winter season.

And those steep icy trails have claimed many foolish hikers over the years who find it easy enough to go down the trail, but find it impossible to return.

Land rescues in this area happen ever so often for folks who don’t heed the trail closure signs.

Across the gorge, perched on the opposite side is Colton Point State Park.

It’s the lesser known and travelled of the two parks. And for me, it’s my favorite.

Visiting Colton State Park can be a winter challenge

It is reached by way of a three mile curvy, steep macadam road that winds its way up the mountain side via hairpin turns and a tree lined narrow drive. In the summer, it’s a great scenic trip. In the winter months its usually impassible.

The Colton Road from Rt. 6 at Ansonia to Colton State Park is not maintained in the winter. In fact, snowmobilers cherish this road and all of the forestry roads beyond the state park as scenic trails to ride all winter long. If there is snow, there are snowmobiles on the road.

But that means that beyond the first snows of the season, Colton Point State Park is off limits to cars and trucks. Don’t try it. There is no cell signal and plenty of places to be stranded.

But the first snow? Why not! The road is icy so your vehicle should be four wheel drive or at least front wheel drive with high clearance and preferably with great sticky treaded winter tires.

The drive up to the park is white knuckle as the car slips and slides through the turns and up the steep parts of the road, but the drive down is worse. The car often becomes more of a sled as it works its way down the mountain side, sometimes in control of the driver and occasionally not.

The first snow came the other night to the Wellsboro area. And I went to Main Street to take photos to document the scene. But in town, the snows are never as visible. So it was hard to tell if this first snow was a good one.

But like a little kid, I woke up before sunrise the next morning and knew that it was time to go to Colton Point to see what the first snow really was like. It’s a beautiful and scary ritual. But oh, what a spiritual time it is.

Up the mountain I drove in the first light of pre-dawn; past the signs that said, “No Winter Maintenance” and past the thousands of trees that line the narrow roadway to the top. I gingerly tested the brakes.

Yes, it was icy. But my SUV climbed steadily and surely as the sun started to peek above the top of the mountain.

I was excited to see that the first snow had been a good one.

The snow was sticking to the trees and low bushes along the way. As I climbed higher in elevation the snow increased and became more and more striking. Sometimes a snow will line the ground but not the trees. This morning the snow is as I want it to be. The perfect first snow. I knew now it was worth it to come here today so early.

I rolled into the lookout parking area just in time for civil twilight, that glorious blue-light scene that gradually turns to strong yellow light. Often the skies over Tioga County are mostly grey and cloudy.

Today too, the light pink-tinged cloudy skies give everything an unnatural bluish-rose look.

I said my morning meditations at the lookout. I was the only one there. Making first tracks in the snow, I gingerly skirted the lookout on the edges trying to keep my footprints minimal in the grainy sparse snow. First snow. Pristine snow. No signs of human presence. A perfect first snow scene.

I left the lookout just as I had found it. Untouched. Undisturbed. And I moved on to the Rim Trail.

The Rim Trail is my favorite walk in the park. It is also drivable via a one-way, one-lane path that tiptoes along the canyon edge past old pavilions built in the 1930’s by the Civilian Conservation Corps “boys”. I have been here many times for many celebrations. Birthday picnics in a pavilion, Fourth of July campfire breakfasts in a pavilion, weddings in a pavilion. But today I am alone with my thoughts as I walk past each old rustic building. My thoughts ramble from good memories of times past to how special the moment…this very moment… is…right now.

It’s cold but the wind hasn’t come up yet, so it’s comfortable. I work my way along the small vista lookout areas from one end of the trail to the other and work my way back to the car. On the Rim trail the sun often peeks through the trees in strong rays of sunlight and sun beams. Sometimes in the fog the beams are powerfully visible. Today in the crisp air, they are star bursts in my lens instead.

Photographers meet at sunrise on the trail

I move back to the car and drive to a place I have just visited a few weeks before. I wrote about it here in a previous article: the Barbour Rock Trail. I park in the parking lot and hurry towards the rim of the canyon along the ¾ mile groomed pathway. I know a friend has already driven here from the Williamsport area for sunrise and I see his truck in the parking lot. I have left him to his solitary sun greeting while I have been elsewhere. But now it is my turn.

I meet him along the trail. He has had a scary trip up Rt 15 this morning in the dark as the roads showed signs of the overnight storm. But he is here and he is excited for what he has experienced. He and I both know that this beauty will be short lived as the season closes off the area to us. We are two blaze-orange hatted photographers sharing the moment along a pathway in the state forest. We are bonded by our desire to share and record this special experience. The first snow of the season only ever comes once.

I walk along the tree root-rutted, snow-covered West Rim Trail. Gingerly I make my way along the single track path watching for tree roots and other things that could trip me up. I am aware of how close I am to the edge of the almost 1000-foot abyss as I pick my way along the faintly visible path. The West Rim Trail’s orange blazes seem few and far between, but I know my way and handily find what I am looking for.

My favorite vista is not easily seen from the Barbour Rock trail. But a quick hike on the West Rim brings me to it. I am speechless. There is nothing to say as I snap some photos of this marvelous, big-as-life nature painting before me. I linger. This is first snow in one of the best places to see it in our area. And I am here. Taking it in. Forever grateful that I can hike here to experience it.

Eventually, I turn to walk back to the car, at once exhilarated by the cold air, the quickly rising wind gusts, and the vast scenes I have taken in.

This morning, my friend has called this place Narnia. Narnia is the magical, mythical, mountainous, snowscape home of the creatures created by C.S. Lewis. A place where time stands still and magic is common. A fantasy world where only a few lucky child-at-heart humans can enter.

It feels like what I imagine Narnia would be like. The snow-magic is palpable here today as each low bush is laden with heavy wet snow. But as much as I want time to stand still, it can’t. The wind has picked up and the snow is blowing off the trees. Within hours the landscape will look very different. We will be back to typical November scenes soon.

Narnia in the Pine Creek Gorge will remain only a remnant of a good memory. Always magical, still mythical.

Back to reality, today, is a celebration. It is a celebration of first snow in one of the special places we are lucky to call home. It’s a beautiful day in Tioga County. 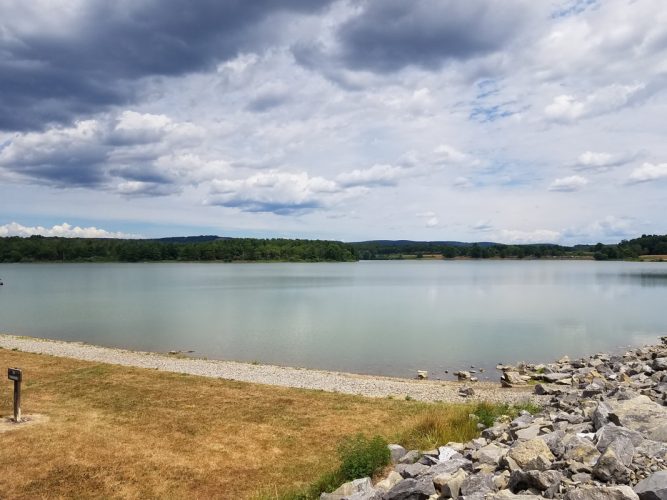 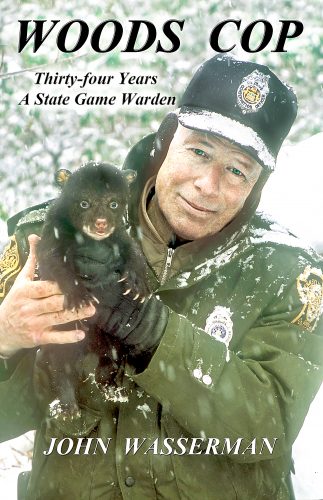