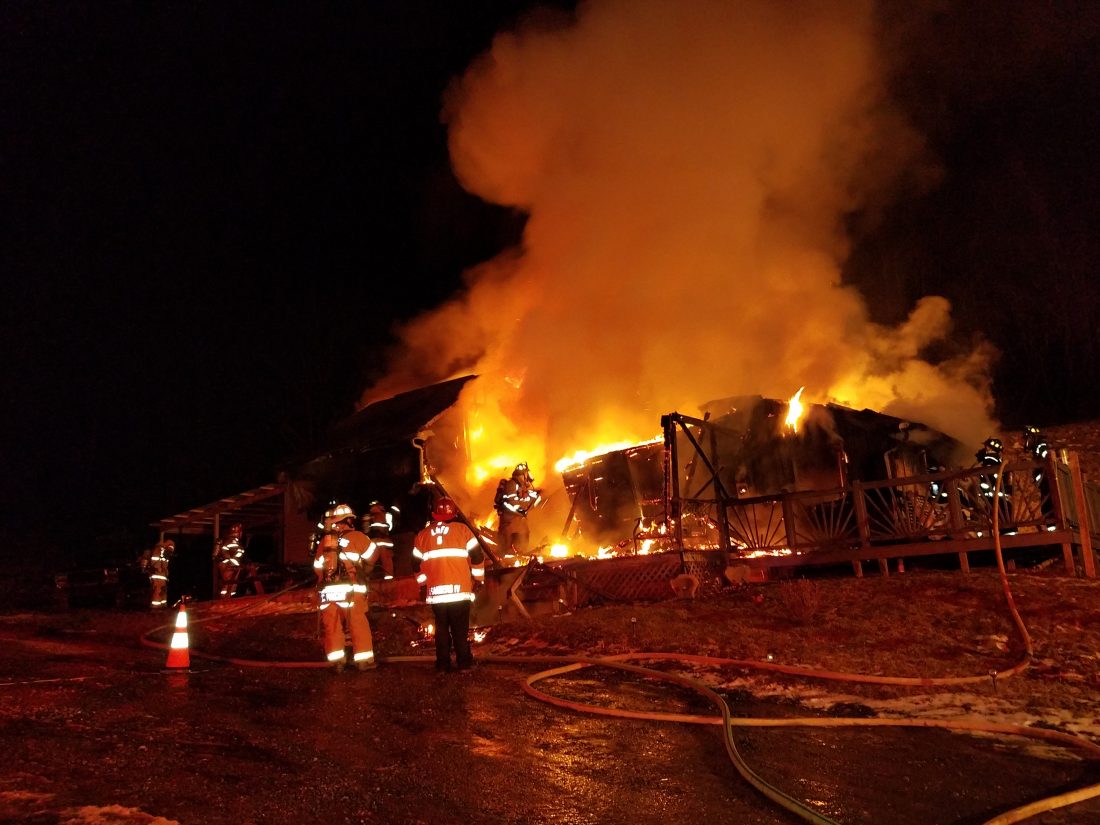 A working smoke detector is credited with alerting a Linden area family late Friday night to a fire in their home, giving them just enough time to safely escape the property along West Emery Church Road, according to Matt Fausey, chief of Citizen’s Hose Co. in Jersey Shore.

“I smelled smoke, and when I came downstairs, there was a fire in the dining room, around our chimney,” Devin Page told a reporter as flames swept through his home at 1239 W. Emery Church Road, about three miles north of Linden.

“I told everyone to get out,” he said.

Page, along with his girlfriend, Angela Snook, the couple’s 16-month-old son and Snook’s mother, Wanda Snook, all fled through a back door.

The family’s two dogs also made it out, Page, a school bus driver for Susquehanna Transit, said. “They’re all good. They’re in the barn,” he added.

The entire home was engulfed in flames when volunteer firefighters from Woodward Township and Jersey Shore first arrived on the scene about 11:30 p.m., Fausey said.

There were no reports of injuries.

“It was pretty much an exterior attack,” Fausey said in describing the firefighting operation. A portion of the home had started to collapse shortly after the fire was reported.

“We were able to do a little interior firefighting as we tried to douse hot spots,” he explained.

The local chapter of the American Red Cross was offering emergency assistance to the family.

Additional firefighters from DuBoistown, South Williamsport, Nisbet, Old Lycoming Township and Antes Fort responded to the blaze. A hydrant about a quarter mile away helped provide water to extinguish the fire, which burned of control for about an hour. Firefighters remained on the scene until 3 a.m. Saturday.

A state police fire marshal was expected to examine the scene later this afternoon and try to determine what might have sparked the fire. Fausey said the home was a total loss.

Page said the house had been his home for seven years.

After threatening his girlfriend with an earlier text message that read “You’re going to get stitches in your ...

Between early Christmas morning and Feb. 8, state Trooper Robert Jacobs — while on routine patrol in the city — ...

A second Philadelphia man has been arrested and jailed for his alleged involvement in the holdup of a Chinese food ...