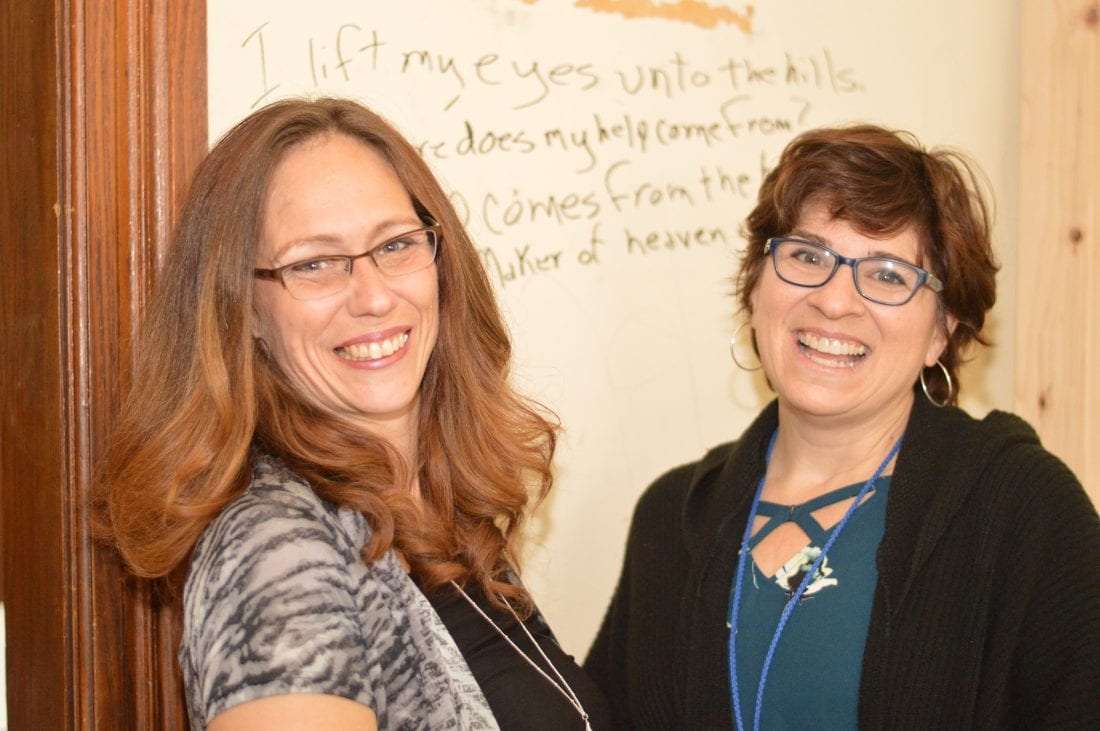 When you walk into the space being renovated for the Sojourner House of Hope ministry, you are surrounded by walls filled with scripture written by those helping develop the house into a place of hope and transformation.

Although the words will eventually be painted over, they will remain — hidden from the eye, but still a part of the foundational truths of the house that God is building to meet the needs of homeless women in the community.

Sojourner Truth Ministries is expanding its services to include a program to house and mentor homeless women with the ultimate goal of having them become productive members of society.

“This has been in the thought process for a year and a half and we’ve revamped and revised and revisited and just hearing people come through here and different agencies sharing almost from a place of hurt. If a person doesn’t fit this criteria, or that criteria or that criteria, really there’s not a way we can help them,” said the Rev. C. Angelique Labadie-Cihanowyz, executive director at Sojourner.

“We were absolutely compelled. We need to do something of real significance with the space that God allowed us to have. We decided, through prayer, about having a place for women to come who have fallen through the cracks and need a little more time to get on their feet,” said Labadie-Cihanowyz.

“It will not be an open invitation. They may have come through the Transitional Living Center or other programs but they’re just not quite ready to fly yet,” she added.

Labadie-Cihanowyz noted that the program is a Christ-based, communal housing that’s short-term.

“We’re planning on six months. The plan is with all the prayer that’s going into this and it’s based on Christ, it’s not run by someone outside. We didn’t want to answer to a grantor, we’re answering to Jesus. So, we have taken the time, almost a full extra year for planning,” she said.

An advisory panel was formed of mostly women, several who have gone through homelessness, addiction, incarceration.

“So they are speaking into this from the perspective of having gone through something or having needed something that isn’t there,” she added. “They’ve given so much insight and wisdom into the process. What they’ve seen work in places and what they’ve seen hasn’t (worked). There’s a lot of good voices in there.”

The house, which once served as offices for the Shepherd of the Streets, most recently had been used to store used clothing for people in need. Labadie-Cihanowyz said that she had researched that type of ministry, checking all the places people can get clothing and found there were several within a short distance of Sojourner.

“I thought that was a duplication of services,” she said. “The board agreed.”

The building needed to be remodeled and that’s where the faith community stepped in.

“The community has come together in such a beautiful way. A group of youth from a Catholic church came. Greenview Alliance purchased and installed all of the windows. A man from a Methodist church is heading up the volunteer work. It’s been really neat to see people come together,” she added.

There will be two sets of bunk beds in each of the three bedrooms, which can accommodate a total of 12 women. There is a separate vetting room where it will be determined if the home offers what potential candidates need.

Labadie-Cihanowyz cautioned that the program is not meant for someone who may be staying at a shelter or is totally homeless, but has made an inconsistent effort to clean up their lives.

“The goal is to be self-sufficient, not just to stay at a place for this long and then they’re out on their own again,” she said.

A candidate for the program must continue to attend their specific support group and must agree to certain requirements such as attending regular religious services, attending devotions and being a part of the Dave Ramsey financial program.

“It’s not just that you have to do this, but you need to do this because you have to have a plan for life. You have to have some type of structure. It’s not just people being told and blindly following,” she explained. “Our goal is to give people the most amount of tools in their tool belt to succeed, and to succeed means to me that they would be pouring back into the community as a healthy individual.”

In addition, every lady in the program will have a mentor who will work with them while they are at the house and after they leave

One difficulty has been getting the word out about the project, Labadie-Cihanowyz admitted.

“To finish this project, it’s going to take a lot of people and a lot of resources and financial resources and donations and volunteers and mentors. Really the whole community,” she said.

As of now, the ministry needs about $30,000 more in order to be able to hire staff and meet expenses for the first year, before the house can open. There is also a list of specific needs room-by-room on the group’s website. At the moment, volunteer mentors and volunteer staff are being recruited in order to go through training, although there is no definite opening date set.

Sojourner Truth Ministries is also running videos on Facebook with women who have gone through similar situations as the prospective candidates for the program and have succeeded in stabilizing their lives and are giving back to the community.

“To get to work with women who are on the small statistic of succeeding through a lot of the things that they have, that’s so humbling and so beautiful,” Labadie-Cihanowyz said. “They don’t brag about their success or anything, but they stand as witness that this can be done. Every one of them, it only happened through Jesus. It tells me a whole lot about healing that I already knew, but to see it and to have conversations with these people that have survived through so much. Jesus is the one — the commonality in their success.”