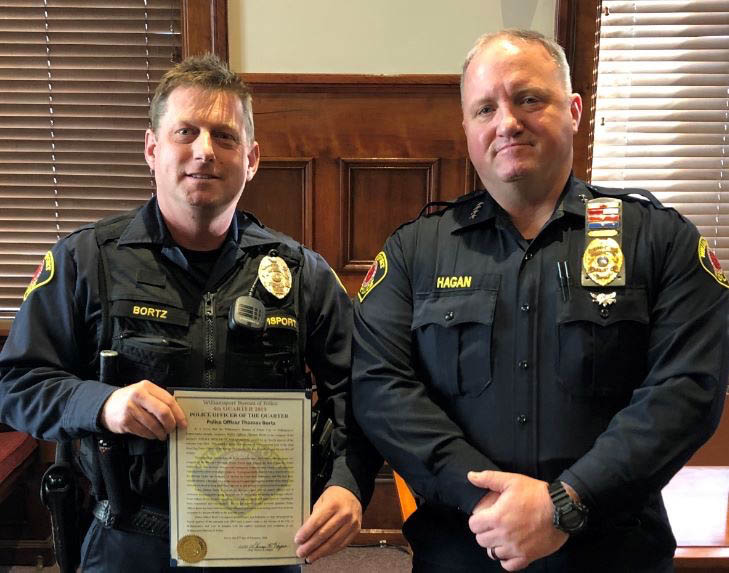 Seventeen-year city police veteran Patrolman Thomas Bortz has been selected as the Officer for the Fourth Quarter of 2019 for his involvement in “numerous emergency responses and criminal investigations that resulted in the arrests of multiple suspects,” city Police Chief Damon Hagan said in announcing the honor.

One such case was the apprehension of a 31-year-old suspected drunk driver on the night of Oct. 24, who fled the scene a crash after his vehicle struck a parked car in the 600 block of Park Avenue.

Bortz spotted the offending vehicle about a block from the crash scene and the driver was stopped in the 600 block of Cherry Street and taken into custody.

Another case involved “a burglary in progress” that occurred in the 2300 block of West Fourth Street in the middle of night on Nov. 17.

Bortz and other officers raced to the scene and nabbed an intoxicated man who had allegedly kicked in a woman’s door.

Bortz also has played an instrumental role in arresting students who were involved “in drug trafficking and drug use in and around local educational institutions,” Hagan added.

The bureau’s top commander described Bortz as “one of the most veteran patrol officers who is extremely knowledgeable, going out of his way to share this knowledge with younger officers.”

Bortz’s fellow officers, including his supervisors, have described him as “intelligent, loyal, committed and courageous,” Hagan said, adding that due to these characteristics, Bortz “has been selected — and has volunteered — to serve as an acting supervisor on many occasions for his patrol shift.”

The veteran cop made news five days into 2020 while working his overnight shift when he nabbed a suspected robbery suspect within moments after a holdup occurred at the Turkey Hill convenience store 700 Washington Blvd.

The robber was reported fleeing the store south on Railway Street to East Third Street, where Bortz spotted the man and took him into custody without incident.