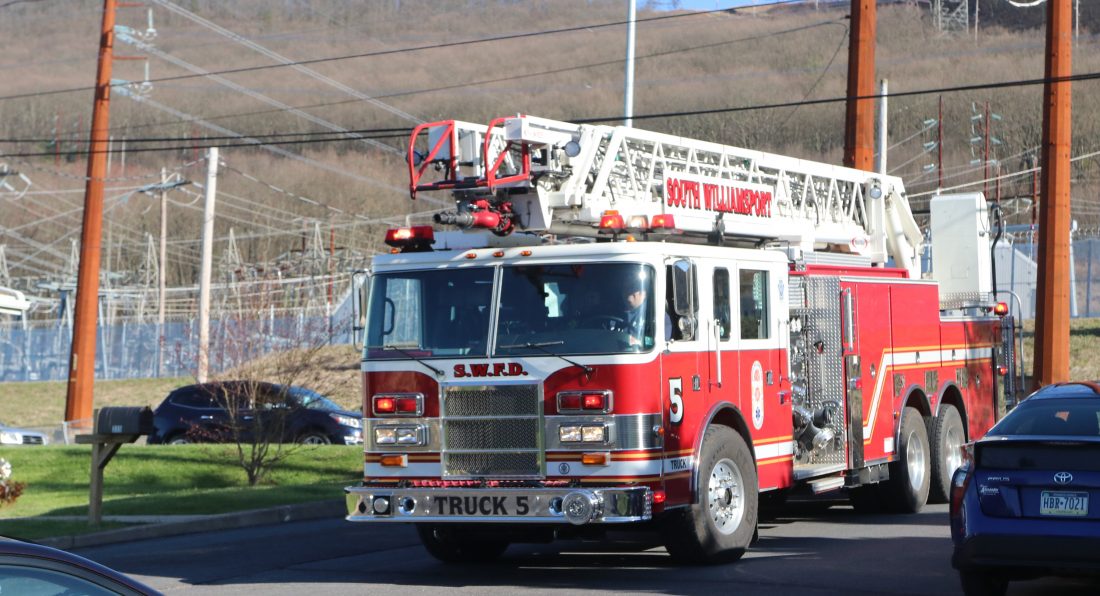 KAREN VIBERT-KENNEDY/Sun-Gazette the South Williamsport Fire Department wishes Gerald Gephart a happy birthday as they drive by his home on Maynard Street.

The COVID-19 pandemic has left many families wondering how to celebrate birthdays during this time of social distancing.

Fortunately for Gerald P. Gephart Sr., a lifelong resident of South Williamsport, his family knew just how to let him know they were thinking about him on his 84th birthday Monday.

Enlisting friends to join in the celebration, his six children, led by his daughter Ann Fry, organized a parade of cars and fire trucks to surprise Gephart on his special day.

His wife of nearly 64 years, the former Carol Mann, was in on the surprise and sat with Gephart on the porch as friends, children, grandchildren and great-grandchildren drove past in cars honking their horns, cheering and yelling “happy birthday.”

As Gephart looked on, the South Williamsport Fire Department trucks made their way down Maynard Street, past Gephart’s home, with their sirens blaring and lights flashings. They were followed closely by around 35 cars.

Throughout it all, Gephart had a big smile and a wave for those in his birthday parade. At first he was confused why all the people were there with signs wishing him a happy birthday and his daughter said that he got a little choked up.

“It was very touching,” she said.

“It was a really good turnout and he was so excited,” Fry shared about her father’s reaction. ” He was really, really surprised, He had no idea.”

Fry said that the fire department wanted to participate because her father is a longtime resident of the borough as are his children.

Gephart was born in the borough, actually in a house across the street from where he and his wife now live. Because of his health issues, his family, except for two of his daughters, do not come in close proximity to him because of the COVID-19 crisis. His health has been deteriorating, Fry said, so the family really wanted to celebrate his birthday in a special way.

“This was the only way we could think to do something special for him without actually touching him,” Fry said.

At one time Gephart worked for the Sweet Steel Mill Company and retired from the Painters’ Union Local 41. According to Fry, in addition to his wife and children, her father loves his dog, Penney, his 22 grandchildren and his 25 great-children.

“He was really, really excited to have this,” Fry added. “It made him so happy.”