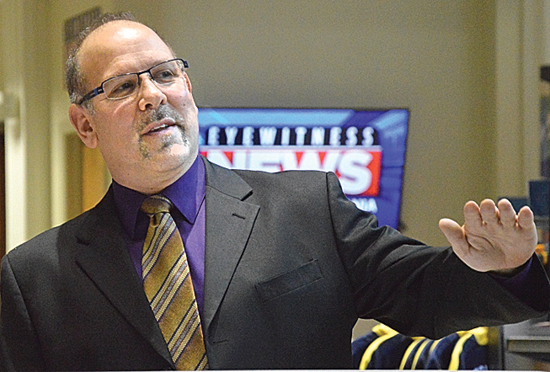 KATELYN HIBBARD/Sun-Gazette Allen Buell, president of Drum Corps Association, announces his excitement to bring the DCA International Championship Competition to Williamsport in 2018 and 2019 during a press conference at the Visitors Information Center Wednesday afternoon.

They won’t be banging their drums slowly, or blowing their horns softly.

When the more than 30 Drum Corps Associates members descend on Williamsport as host of the association’s International Championship competition to be held over Labor Day 2018 and 2019, it won’t go unnoticed.

“It’s a four-day extravaganza,” said Allen Buell, executive director of the association during a news conference Wednesday at the Lycoming County Visitors Bureau, where it was confirmed the city and Williamsport Area School District will host the international competition over Labor Day weekend 2018 and 2019.

“It will have an effect in this community in a way you haven’t seen in some time,” Buell said. Rochester, New York, and annapolis, Maryland, also bid but Williamsport was selected, he said.

Currently held in Rochester, New York, the championship has an annual economic impact of $10 million to that city’s market, and is expected to boost tourism dollars here, according to Fink.

The drum corps and their families and friends will arrive, many during and some following the Little League Baseball World Series Championship weekend, said Jason Fink, executive vice president of the Williamsport/Lycoming Chamber of Commerce.

The competition will take place at the newly renovated Williamsport Area High School football field, but Buell noted activities include the night before with West Fourth Street blocked off for performances and pre-competitions.

“You’ll hear us,” he said of the snare drummers and horn sections, nor will the color guard’s snapping flags go unnoticed as the streets swarm with performers and spectators. Restaurants and hotels will burst at the seams, he promised.

The high school setting, which he described as “spectacular,” as well as the friendliness of the chamber, county, city and hoteliers and restauranteurs will benefit when as many as 10,000 people descend on the community, some from England and Canada and, perhaps, Japan.

The activity begins on Friday as individual ensemble competition is held on West Fourth Street, from City Hall to Pine Street, Buell said.

The activity moves inside the Community Arts Center with a mini-corps competition, with many of the participants getting to share their life experiences with each other, before the world championships move the following day and Sunday to the stadium.

While Little League is tremendous for tourism dollars, the drum corps is different in that it is the finale of their season.

Students who belong the Williamsport Marching Millionaires Band were at the news conference, eager for the city and Lycoming County to host the championships.

“As well as getting the opportunity for us to see has this is done on a global scale, and how this is done professionally, it’s just a great opportunity to expose more of the community to what we do, and to how big it actually is,” said Ethan Ruhl, 16, a junior at Williamsport Area High School.

“I think it’s a great idea because it will allow people who maybe are not into marching bands or really know much about it, who are into baseball, to stay and see what it is about and maybe get into it themselves,” he said.

Asked why he performs in the band, Ruhl said, “I love music. I’ve always loved it my whole life and I thought it was a great way to meet new friends and new people who I may have never met otherwise. It is just a great activity. It got me active. Got me to be part of the community. It just gave me new experiences that I may not have gotten otherwise.”

“We worked with the school district to showcase the facility up there, and to accommodate the competition,” he said.

In terms of lodging, the bureau worked with hoteliers and there was a fee associated with it, which the visitors bureau will take care of, Fink said. The fee goes to cover all costs and to be able to utilize the facilities, he said. “The school district will be made whole and does not have to be concerned about incurring any costs,” Fink said.

Dr. Timothy Bowers, superintendent of the school district, said the district will be committed to an open door policy for the fans, competitors and visitors it expects. The district has a strong reputation for music education, he said.

Every school district in the county has committed its facilities for the corps members to use while they are in the county, Fink said.

He views these two years of international championships in the city as an opportunity for expanding the horizons of the music education program at the district.

“Tourism means jobs,” said Michael Chapaloney, state director of Tourism. One out of every 15 jobs in the state is supported through tourism, he said.