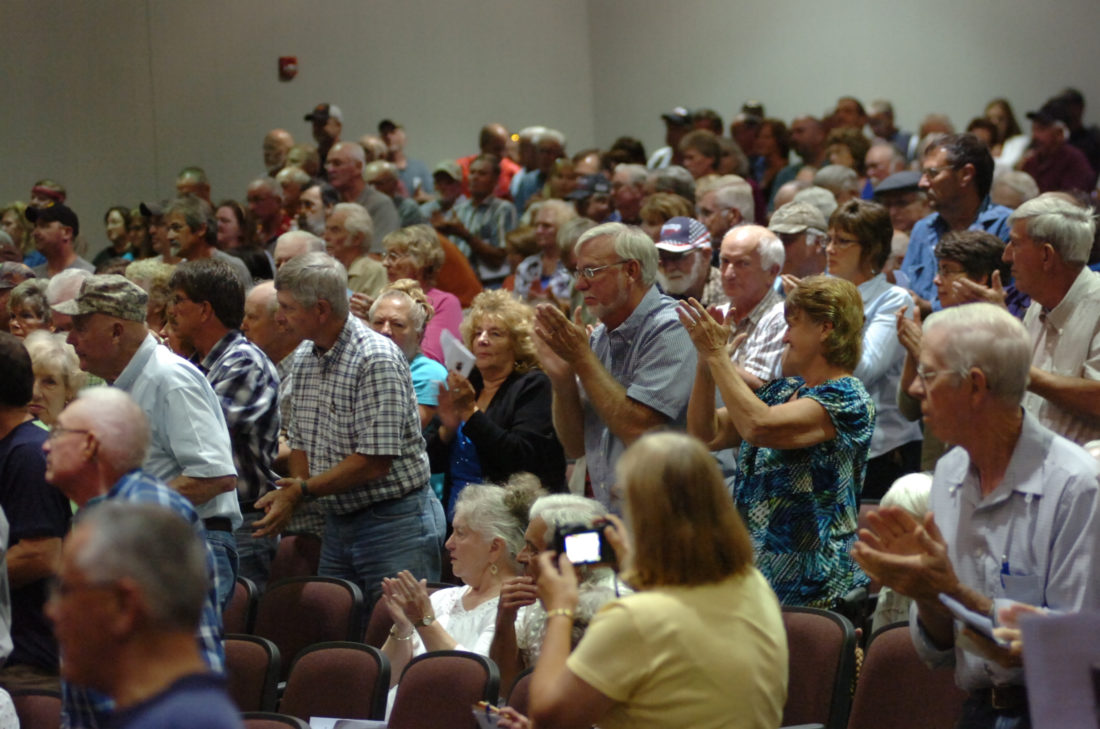 MARK NANCE/Sun-Gazette Residents pack the auditorium at Towanda Junior-Senior High School for a town meeting in support of a house bill that would set a minimum rate that gas companies must pay in royalties to land owners. Area lawmakers plan to introduce the bill again next year.

After a slowdown in production due to low prices and other factors in 2016, the natural gas industry appears poised for a comeback next year.

“You can always tell by increased truck traffic that there is more activity,” said Travis Windle, public relations liaison with the Marcellus Shale Coalition, a collection of industry representatives.

Evidence of this also may be seen at the Williamsport Regional Airport, where flights to and from Philadelphia are seeing more gas industry people in recent months after a major slowdown over the past

few years from the peak of Marcellus Shale drilling in 2010.

Airport marketing director David Frey said he is seeing a return of the crews that work on gas wells.

“They change crews all the time. During the heyday a few years ago, a third to half passenger loads were gas-related, then we dropped off the table when activities ground to a halt for the last year or so. There were no more crew members, engineers or the like,” he said.

Instead of drilling, companies have been building up their infrastructure, which takes less manpower than fracking and drilling, Frey said.

“They spent their time on infrastructure, pipeline and transfer stations, because drilling dried up and has been really nonexistent until September,” he added.

The decrease in gas prices over the past year also has contributed to drilling companies scaling back on the activities, but prices slowly have been increasing, which will only help to bring the industry back to the region.

“Now we are seeing increasing numbers, so we are looking for a resurgence, back to where we were prior to the gas prices bottoming out,” he added.

Industry-related people on flights comprise between 10 and 20 percent of the air passenger loads in an out of Philadelphia, he said.

The Marcellus and more recently Utica Shale plays in the Northern Tier are only a percentage of the gas plays in the nation under development and workers tend to “cycle around to different gas fields.”

Frey noted that an average gas well has about 105 companies that participate in its production.

“There are 114 companies in Lycoming County that have facilities to do all the different phases of these operations,” he added.

Tioga County’s Grand Canyon Airport in Shippen Township has not seen the same kind of increase in gas-related traffic or flights in or out, according to airport manager Craig Musser.

“There is every indication there will be some kind of an upturn, but you won’t see the same amount of activity all at once like there was back in 2010,” Musser said.

David Spigelmeyer, president of the Marcellus Shale Coalition, said while Pennsylvania’s natural gas industry was “a bright spot during the historic 2008 economic downturn and the anemic recovery that followed, our industry, which supports tens of thousands of good paying jobs especially for small businesses and unions, has been experiencing enormous financial pressures.

“That said, there’s a tremendous amount of promise on the horizon and we’re upbeat for the opportunities in the coming months and years.

“Our industry is focused on getting the economic equation right in the Commonwealth and is working diligently to build out the necessary infrastructure to get gas to market, helping to create thousands of good-paying jobs while also securing the economic future for all Pennsylvanians,” he said.

Tioga County Commissioner Erick Coolidge said the abundance of product translates to lower gas prices and benefit to consumers, which they will continue to see next year.

“There has been a constant development of well sites, with at least three in Tioga County, one drill rig to Talisman … and Shell and Seneca have one rig running each.

“In addition, pipelines are being constructed, with a big one in Liberty Township,” Coolidge said.

The Lepley pad is under development now in Liberty Township, he added.

“That indicates the impact fee dollars will continue to come off each well developed,” Coolidge said.

Coolidge noted that the natural gas impact fee funds are being invested by communities and municipalities in upgrades to equipment, to maintain roads, ditches and sluice pipe “so the taxpayers don’t have to bear that cost.”

Though he doesn’t see it picking up in intensity, Coolidge said he believes “they will continue to go at the same pace in 2017.”

“The Marcellus and Utica are prolific and will continue. They are not going away. It is just not at the level it was, but it means revenue will continue to be reinvested back into the communities from which it was derived,” he added.

According to the U.S Census Bureau, population numbers in north central portions of the state have dropped over the past four years.

Population figures for 2013-14, the most recent figures available, reveal there were 180,448 people living in a five-county region of the Northern Tier, including Bradford, Tioga, Sullivan, Susquehanna and Wyoming counties, a decrease of about 2,000 people living in the same region in 2010, the height of natural gas drilling here.

Bradford County Commissioner Doug McLinko believes there is a direct tie in to the loss of natural gas industry related jobs.

“The good news is our county is probably less than half developed at best, so we will see that resurgence.”