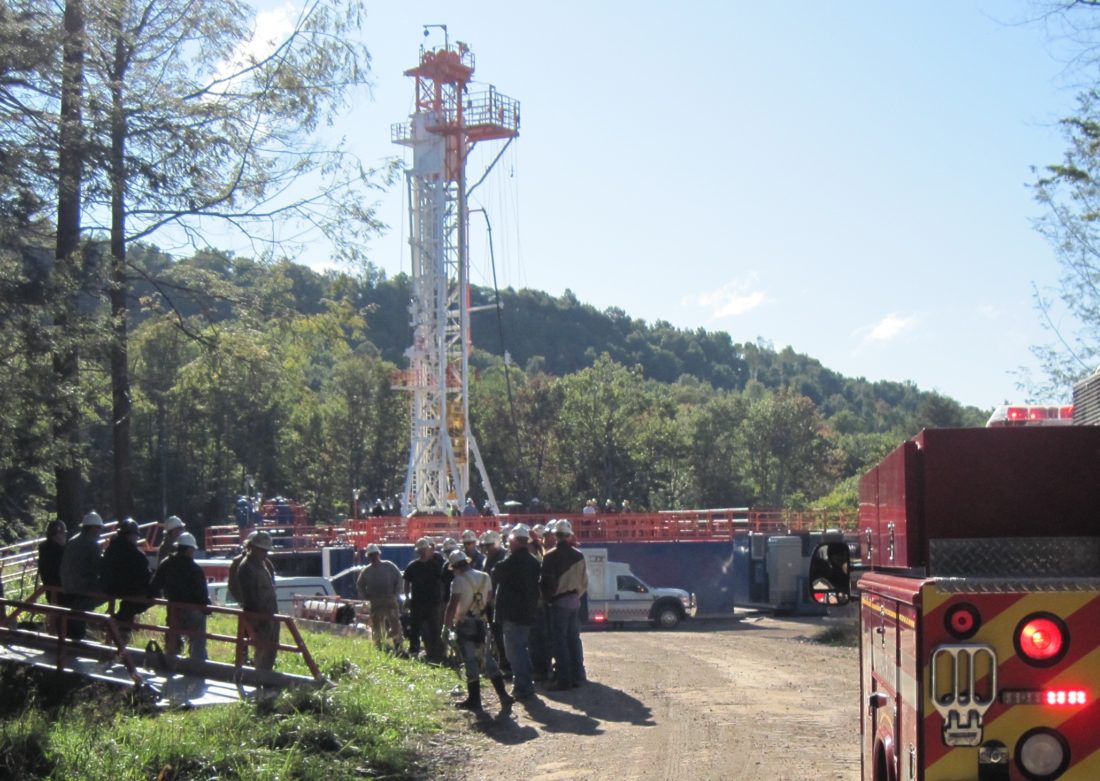 SUN-GAZETTE FILE PHOTO Emergency crews arrive at a gas well site near Trout Run in late September, 2009, during an exercise designed to evaluate the ability of emergency agencies to respond to natural gas industry accidents. A “victim” trapped in the gas drilling pipe at the left in the above photo. Gas well workers gather in a muster area, left photo, as emergency units arrive on the scene. Municipalities in Lycoming County will get $5.46 million in 2016 state impact fee money.

The county alone is to pick up $3.18 million — the fifth highest of all counties in the state.

Those funding totals, as reported by the Pennsylvania Utility Commission, represent decreases from 2015 totals as gas drilling in the area continued to drop off.

Still, local governments officials welcome the money for their communities.

“Basically, we are just going to sit on this money,” he said. “It goes into the bank and gets interest.”

The township’s 2016 share comes to $687,272 — the second highest of all Lycoming County communities.

Fry conceded that represents a generous chunk of money, especially for a township with a yearly budget of about $350,000.

He can foresee eventually using the money for paving.

“I know down the road people appreciate these roads we got,” he said “We are in good shape right now. We don’t owe anybody any money.”

Cummings Township’s allocation is the largest amount being disbursed to any community in the state, according to the PUC. The township has 248 wells of the county’s 875 total.

Act 13 places the impact fee on every well drilling for gas in the Marcellus Shale formation. The levy changes from year to year based on natural gas prices and the Consumer Price Index.

Under Act 13, communities are able to use impact fee revenues for any of a number of approved uses including public infrastructure improvements, emergency preparedness and response, environmental protection, social services, records management, and tax reduction.

Loyalsock Township Manager Bill Burdett said the municipality’s allocation of $189,879 will be used for paving roads.

In the past, money has also been put back into the general fund, he noted.

Washington County will receive $5.38 million in 2016 impact fee dollars, the highest of all counties in the state.

“We haven’t had any discussions,” he said. “We just got notified of the amount.”