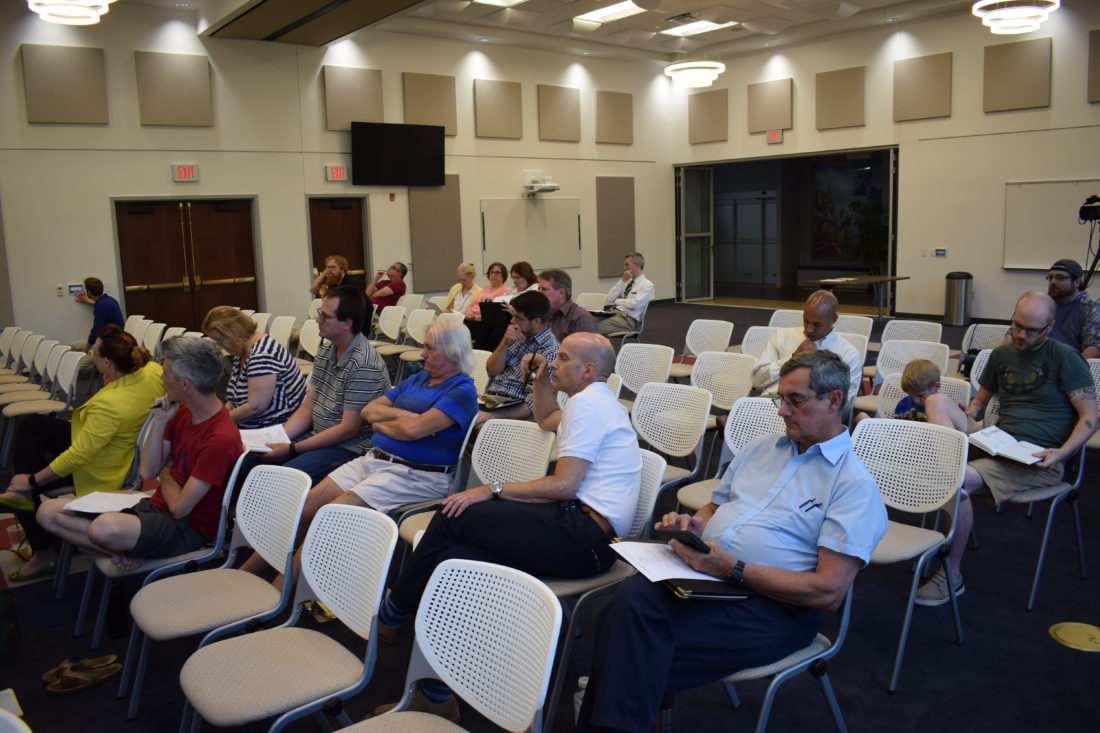 It was described by one city councilman as an “exercise in democracy.”

About 30 individuals gathered inside the Trade and Transit Centre II building Tuesday night to listen and have their questions answered on a process underway in Williamsport.

City Council sponsored the town hall as a means of better informing people and potential voters about the steps it has undertaken to explore whether voters will want to approve a question, if it is approved at Thursday night’s council meeting on final reading, that would be on the fall ballot.

The question asks voters if they want to elect a study or “charter commission” to spend nine months looking at forms of government available to third-class cities.

“I commend council for having the moxie to give you the opportunity,” said Ed Fosnaught, of the Governor’s Center for Government Studies, the main invited guest speaker at the town hall.

Those interested in being on the committee, including any council members who want to be on it, would first petition to get their names on the ballot, and take it to the courthouse, Fosnaught said. Each name would be on the ballot and the seven highest vote-getters are those who would be on the unpaid commission, he said.

The commission then has nine months to deliberate and arrive at a recommendation on the best form of government for the city. The commission may request assistance and resources from the municipality.

If there’s no change and it’s voted down, the city retains its strong-mayor form of government and the question may not be placed on the ballot by ordinance or petition again until 2022, Fosnaught said.

“Self-study is healthy,” he said.

If the voters want a commission, that body would look at either a strong-mayor, council-manager, commission form, or weak-mayor government structure.

Under a council-manager form of government, one member of the commission would act as a liaison to the appointed town manager. A commission form means each member of council oversees various departments; it was done before 1972, according to Jonathan Williamson, council president.

A weak-mayor government has a manager conducting daily operations and some power given to the mayor such as his or her control of the police department.

A group of individuals who support a home rule charter and that option to be added to the referendum asked Williamson if council would give the people that choice.

The option is open to those who register to speak in the public comment period of the council meeting on items on the agenda by noon today, according to J. David Smith, city assistant solicitor.

Council would then either vote on second reading, or would start all over with a new question that might include the home rule charter option.

Local coffee shop owner Karl Fisher was curious about other similar-sized cities who have the council-manager structure for comparison.

Fosnaught said there’s a list of municipalities “three pages long” with those which have either a manager or Home Rule structures.

“I consider this a good turnout,” he said. The town hall meeting coincided with the home opener of the Williamsport Crosscutters and State College Spikes at BB&T Bankpark at Bowman Field. Mayor Gabriel J. Campana was not at the town hall. He threw out the first pitch at the Crosscutters game.