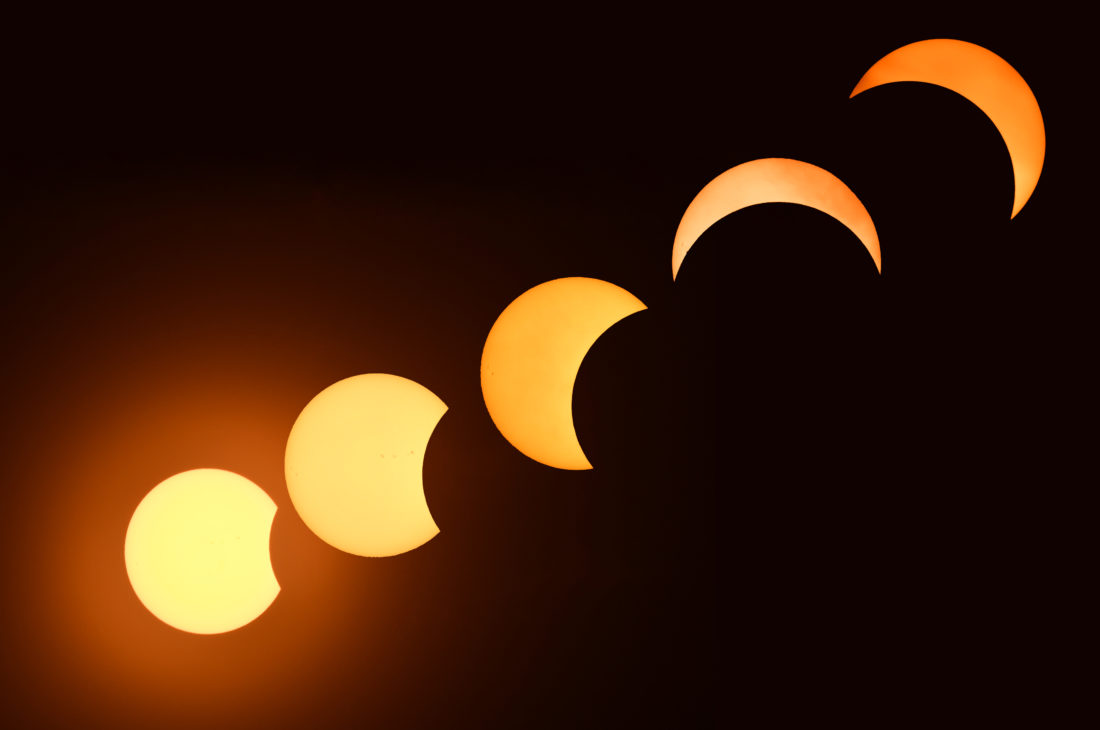 MARK NANCE/Sun-Gazette A sequence of the solar eclipse from around 1:15 until clouds rolled in around 3:00.

It was all eyes on deck for a solar eclipse safely viewed Monday afternoon through protective lenses and a telescope set up for students and staff at Lycoming College’s Heim Science Building.

Students, many of them studying astrophysics or taking an astronomy class, gathered with Dr. Richard Erickson, associate professor of astronomy, who set up a special viewing telescope on the southside patio of Heim at 12:30 p.m.

The eclipse began precisely at 1:17 p.m. and reached maximum coverage at 2:30 p.m., ending at 3:57 p.m.; however, a thunderstorm popped up before then in parts of Lycoming County.

Erickson didn’t want any students to hurt their eyes and had devices with which to view the eclipse.

Many of them brought tinted lenses or carried a welder’s mask or took turns viewing the spectacle by means of the telescope with a filter.

For sophomore John Balas, of Stroudsburg, the ability to be at the college to view the transit of the moon across the sun was a rare opportunity.

Balas gathered to watch the movement from when it was a sliver to a large black bite taken out of Earth’s closest star.

Balas said he’d seen lunar eclipses and gazed at the constellations at night, but to be alive to see it was truly an experience of his young life.

Scores of others chose instead to stand in line and take turns looking into the telescope.

“I could see a sliver of the moon covering the sun from left to right,” said Sanjana Soondoor, a freshman from Maritius.

It became noticeably cooler and slightly darker at about 2:40 p.m. The fun atmosphere on the deck included visitations from active and retired college professors.

Behind the astronomer’s telescope, Erickson manned a laptop linked to view the path of totality.

In addition, Erickson’s computer image captured the total solar eclipse at Madras, Oregon, as the corona and the ring which is part of the sun’s surface flared off as the moon covered its face.