Governor talks about state budget during stop at Mansfield school 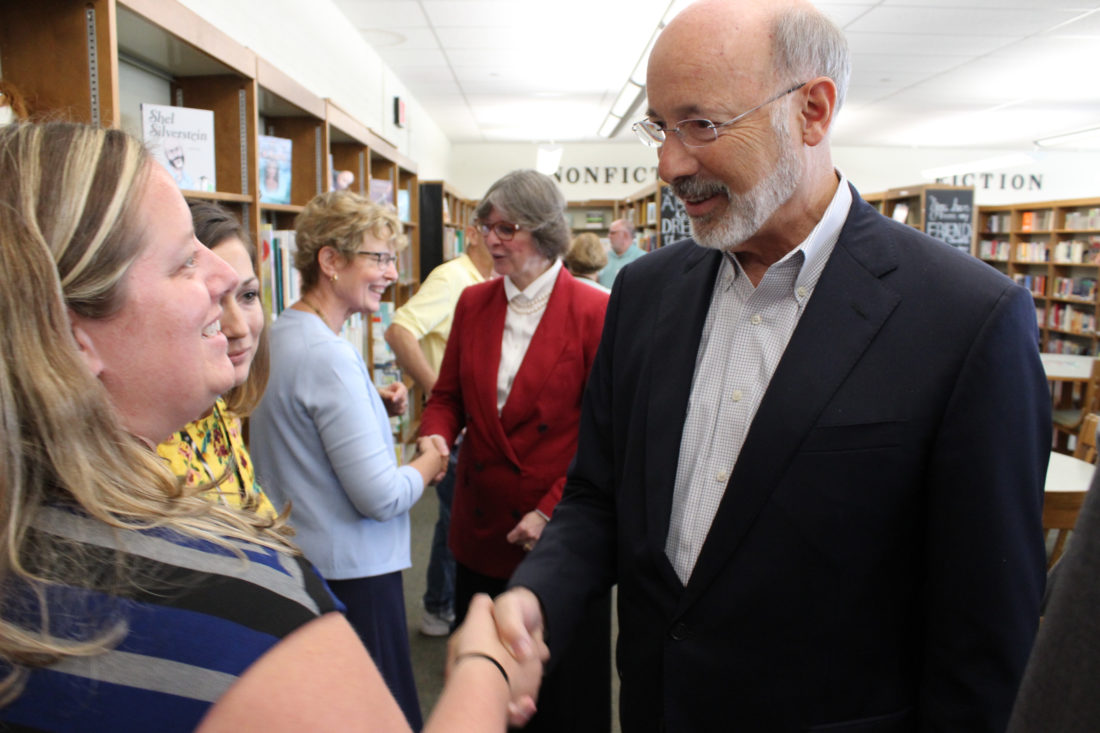 MANSFIELD — Gov. Tom Wolf spoke about the budget stalemate during a visit with elementary students in the Southern Tioga School District in Mansfield on Thursday.

In his visit of the area, Wolf toured Warren L. Miller Elementary School as part of a tour across the northern tier.

As for the budget, the governor gave a latest update on the stalemate while meeting in the library of the school.

“The Senate yesterday passed nonconcurrence with the House closing, so that means they’re both going to get together and work out whatever differences they have,” Wolf said. “I think we’re moving toward an agreement.”

He said he was not sure what the biggest issue was.

“The House Republicans didn’t seem to like it,” he said. “There was some disagreement there, and I think there was some concern in making sure we pay for the budget that everybody agreed to.”

He said it was important not to be too taxing to the state citizens.

“Unfortunately, what happened was by taking so long to come to the conclusion, we got a credit downgrade, which means the interest we pay on debt, school districts like this, municipalities, counties, the state … all going to pay higher interest rate,” Wolf said. “Over time, that’s going to cost hundreds of millions of dollars. The delayed cost is tax increase.”

He said that it involves loans.

“Everybody has to borrow money, to do improvement to a school or something … if they ever have to borrow money, it’s just like personal. If your score goes down, you have to pay a higher interest rate,” he said. “That’s the same way with all these public agencies.”

As far as a resolution, Wolf said that there needs to be more attention to key issues.

“We ought to be paying attention to a lot of things. Education is key among those things,” he said. “I laid out my budget on time back in February … (I laid out) what I thought we ought to do, we ought to focus on our education, focus on our seniors, … focus on jobs, creating jobs and the opioid epidemic.”

He said it’s about finding a balance.

“I understand government can’t do too much, should not be intrusive, but it cannot do too little, either. People need things like schools,” he said. “So, the key is to figure out what that balance is. That’s what I support.”

Agreement on a budget would make things easier, according to Wolf.

“I think I’m paying attention to it, and I think most of the people in Harrisburg are paying attention …” he said. “I will manage as I have to, to make sure that we do everything we can to continue to pay attention to those things, but it would be a lot easier if we had an agreement on a budget.”

He said that there are consequences to irresponsible behaviors.

“There’s all kinds of room for debate and disagreement … but you can’t do irresponsible things,” he said.

He said he’s hoping for an agreed-on budget.

“I can manage with the assumption that we’re going to get to a budget up to Oct. 1,” he said.

As of now, he’s working under the assumption that an agreement will happen by then, and he is “hopeful and optimistic” that it will happen.

“Whatever it is, I’m going to manage the situation,” he said. “I will do the best I can to address the priorities that I think all Pennsylvanians have. Education, protecting education … protecting the options for seniors, protecting our job creation record … and finally, … to combat the opioid epidemic.”

Sam Rotella, Southern Tioga School District superintendent, said that the governor met with students in four classrooms and visited around the school.

“I think it’s humbling, and I think it’s inspiring,” Rotella said. “I think it’s an amazing opportunity not only for Southern Tioga School District and specifically this elementary school … but for our region.”

He said it was great to have the governor meet with the students and speak with them about what they were doing in class.

“There are a lot of amazing things happening, a lot of quality education happening, and it’s an opportunity to be exposed,” Rotella said.

Rotella said the students had a great time meeting with the governor.

“Some of them were in awe, and some of them are so innocent that it’s just another person visiting them,” Rotella said. “It was pretty neat.”

He said that the elementary students got a chance to feel special.

“We try to do a lot of the same things in our district, and for an elementary school, it shows us the that it is the foundational piece to education,” he said. “Kids make a lot of social, emotional decisions in this grade level, and they’re also inspired in elementary school. I think giving credence to elementary education is so important.”

Wolf said he was also stopping to have lunch in Wellsboro on Thursday and was looking forward to seeing that area as well.