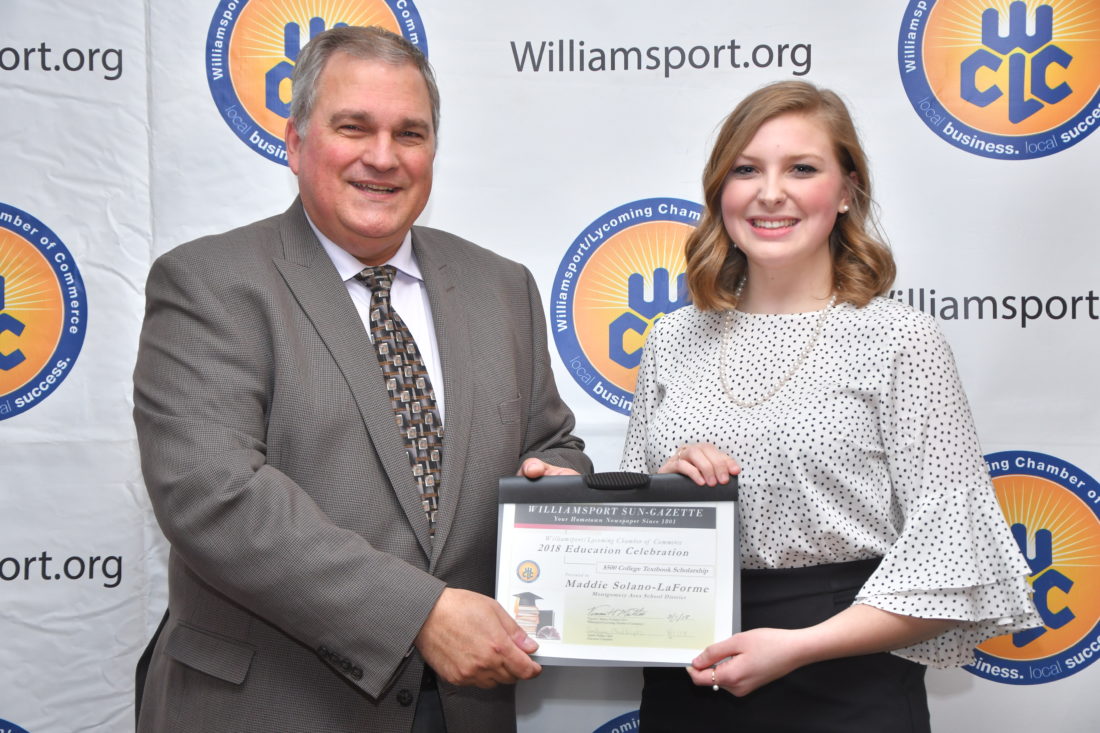 The event honors outstanding achievements in education throughout the county, including honoring one student from each of the county’s school districts with a Student Recognition Award.

“It is a tremendous honor to be before you here tonight representing Montgomery Area School District,” she said.

The students who won

were also given a set of natural wood crayons sponsored by the First Community Foundation Partnership of Pennsylvania. Jennifer Wilson, president and CEO of the foundation, said the crayons would be a symbol of a diverse, thriving community living together in the same box.

“The foundation has given each student honorees a charitable gift certificate to designate a $50 foundation grant to their favorite Lycoming County nonprofit,” Wilson said.

“Teachers have a special place in my heart … It is a great profession, and we don’t always say thank you for what they do enough,” said Vincent Matteo, president and CEO of the Williamsport/Lycoming Chamber of Commerce.

The Alumni of the Year Awards went to Dr. William Martin, class of 1968 of Lycoming College, and Chris Keiser, class of 1995 of Pennsylvania College of Technology.

“This award is given annually to a local graduate of the college who has made a significant contribution to the quality of life in Lycoming County, has excelled in his or her own profession and is active in the community,” said Dr. Davie Jane Gilmour, president of the Pennsylvania College of Technology.

She said Keiser’s community work goes beyond the tangible and into the realm of selfless, and he has done a lot of work with Larson Design Group.

“He was publicly recognized for his design of the River Portal sculpture during the August 2016 dedication of the Trade and Transit Centre II, and recently earned his Registered Landscape Architect’s stamp from the Commonwealth of Pennsylvania,” she said.

Chip Edmonds, executive vice president of Lycoming College, said that Martin was a true diamond in the world of education.

“Dr. Martin was born and raised here in Williamsport … He came to Lycoming College where he pursued a biology degree and a teaching certificate,” Edmonds said. “Later in his career, he went on to pursue a master’s (degree) and a doctorate from Penn State University in education administration.”

Edmonds said Martin was principal of Williamsport Area High School and then left to go on to have an extraordinary career at Penn College.

PMF Industries Inc. was honored as the recipient of the Business Partner in Education Award.

“PMF Industries roots in Williamsport trace back to 1961 and over the years have expanded into a 150,000-square-foot facility with 105 employees,” said Courtney Kasenchak, financial advisor with Merill Lynch, Pierce, Fenner and Smith.

She said they are a pioneer in the manufacturing markets, expanding their expertise and capabilities.