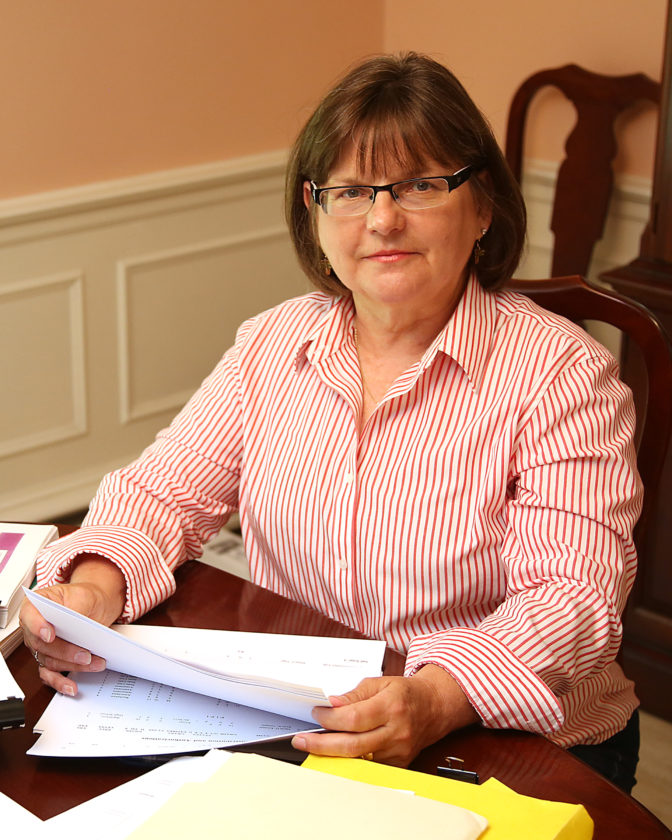 PHOTO PROVIDED Williamsport resident Rebecca Burke was one of the Right-to-Know requesters who inspired Lycoming County to publish prior years' budgets on its website, according to county officials.

(EDITOR’S NOTE: This is Sunshine Week. Sunshine Week is about the right of everybody to know what government is doing, how it is doing it and why it is doing it. The Sun-Gazette this week will take a closer look at the state’s Right-to-Know Law through a three-day series. We’ll extend the series a fourth day to include a report by the Associated Press on new perils threatening open government.)

A taxpayer contacts a municipality to request what the agency does with the money from a specific tax over a year. Days pass and when the individual is finally given an answer, the response is disappointing as the municipality refuses to give that information.

No matter the agency — be it state, local, legislative or judicial — all government records in Pennsylvania are presumed to be public with few exceptions.

In the scenario that a government agency denies access to public information, Pennsylvanians have access to the Right-to-Know Law and the penalties that come with a public agency denying free information.

“Without access, there is no accountability,” said Melissa Melewsky, media law counsel for the Pennsylvania NewsMedia Association. “The people of Pennsylvania can not hold their officials responsible unless they have access to why and when decisions were made.”

The Right-to-Know Law gives an avenue for an individual to formally ask a government agency for public information. After a formal written request is made, the agency has five business days to grant, deny or request an extension on the request. Knowing the correct pathways for asking a government agency for records can stop a request from turning into a long drawn out process.

Knowing how to ask

If a request for public documents is well thought out and the requester has contacted the correct agency, most people will never need to take the next step and file a Right-to-Know request.

Handling a formal Right-to-Know request is usually an unnecessary step for both parties. Government agencies and their staff members in most cases will understand the public’s right to the information and the law states that agencies that don’t comply are subject to thousands of dollars of fines.

“There’s nothing stopping a citizen from going to their local agency and asking to see public records,” Melewsky said. “There’s no reason for them to be denied and there’s no reason to rely on the Right-to-Know Law.”

But when a request is denied, the Right-to-Know Law can be a powerful tool.

When asking to see public information, the first step should be to research the department that is the most likely to have the records in question. Filing a Right-to-Know request is useless if the department in question doesn’t have the desired files.

Agencies do not have to answer questions, according to Melewsky, so specific wording can be paramount.

“If you are looking for salary records, you should say: ‘I want records that show how much someone made last year,'” Melewsky said. “The more specific you can be about the information you are seeking, the more likely it is you’ll get a good response.”

A right-to-know request is best used after the requester has tried unsuccessfully to get the information from the correct agency.

Requests can be delivered to an agency by email, fax, U.S. mail or in person and should be addressed to the agency’s open-records officer, according to the Pennsylvania Office of Open Records.

Every agency has an employee who is designated as an open-records officer whose duties are to receive Right-to-Know requests, to ensure that the request is seen by the correct people within the agency, and to keep track of the process every step of the way.

When an open-records officer receives a request, they have five business days to approve or deny the request or file for a 30-day extension. To be approved for an extension, the agency needs to give an adequate reason such as the records are in an off-site location or that there are staffing limitations.

Ultimately a decision is made, so what happens if a request is denied?

Within 15 days of a denial, the requester can file an appeal with the state Office of Open Records.

According to the office, the written appeal must be sent by mail, email or fax.

The appeal should include a copy of the Right-to-Know request, a copy of the denial letter, a statement explaining why the requester believes that the records are public and speak to the answers the government agency offered as to why the records were not open to the public.

If a request and the appeal are denied, the requester or the agency has another 30 days to file a petition for review with the Commonwealth Court.

The parties involved, which can include the agency, requester, the Office of Open Records and the appeals officer are all eligible to receive a notice of action to respond at the hearing.

If the court reverses a denied request, it can award the requester attorney fees and the cost of litigation if it was decided that the agency had withheld the information against the law.

An agency that has denied access to public records is subject to a maximum of $1,500 in fines. If the agency does not promptly comply with a court order to give access to the record in question, they can receive fines of $500 per day until the records are provided, as stated in the Right-to-Know Law.