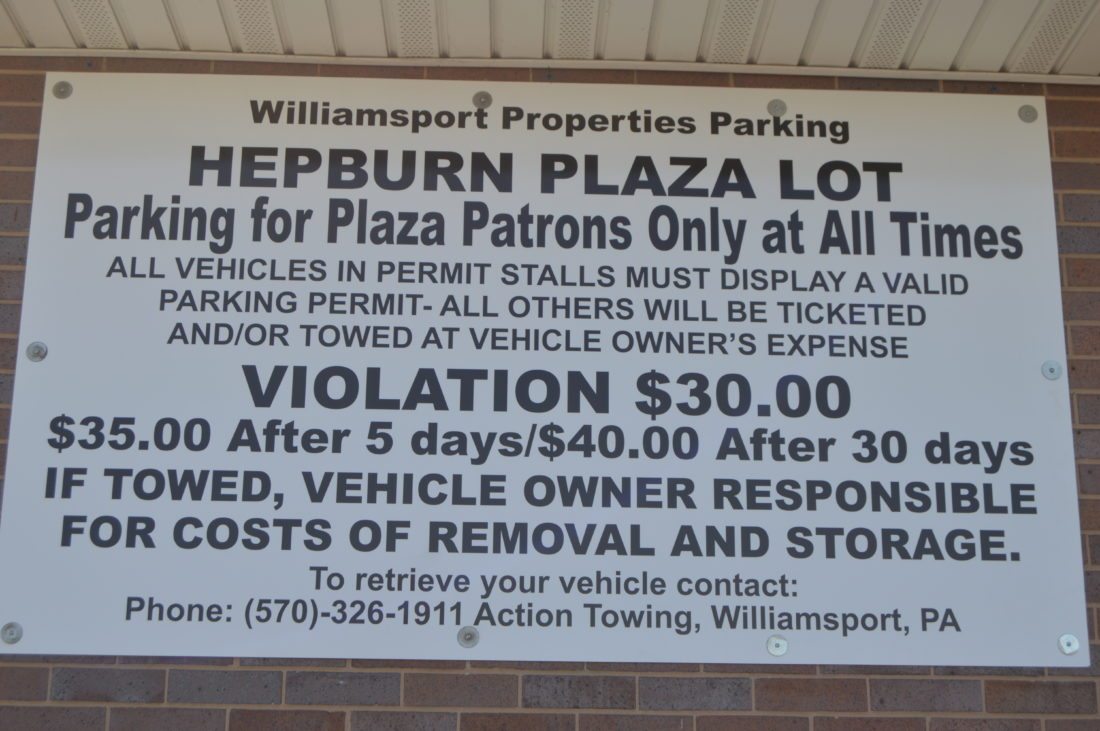 PAT CROSSLEY/Sun-Gazette A sign at the Hepburn Street parking plaza alerts motorists that they could face a $30 fine for using the lot for anything other than plaza business.

Many who parked at the Hepburn Plaza lot Friday and Saturday to watch Uptown Music Collective perform a tribute to The Rolling Stones at the nearby Community Arts Center got $30 parking tickets.

It has upset people who were unaware of the private firm Williamsport Parking Properties Inc. enforcing illegal parking in the lot.

The company falls under the umbrella of its parent, The Liberty Group, which is adding a family entertainment addition to nearby Liberty Arena.

The company pledged to reimburse those who were ticketed those days, claiming a mistake was made. However, ticketing throughout the week will continue.

The Liberty Group owns several private lots throughout the Central Business District, according to a company spokesman who discussed the new enforcement action on condition of anonymity. He added that the company wants to reserve the Hepburn lot permit spaces for clients of the family entertainment addition at the Liberty Arena.

The tickets were written in error because the company has no intention of issuing fines during weekends. It will give reimbursements to those ticketed at the Hepburn lot during the two nights, the spokesman said.

“We apologize for any inconvenience,” a company statement said.

“It kind of stinks,” said David Whitnack, a former employee of the Community Arts Center who was ticketed for parking in the Hepburn Plaza.

He said better signs need to be installed. The lot includes a mish-mash of stalls, some allowing for one-hour parking for motorists to get business done or eat, and others that require permits to occupy spaces, he said.

Nathan Phish also is upset. He said he and his wife got a ticket on their vehicle for parking outside of the former Highmark building near Kohl’s over the weekend. The couple was told by Residence Inn staff, where they stayed before, that it was fine to park after business hours on the weekend.

“It seems that The Liberty Group is charging a lot of people on parking violations,” Phish said. “It seems like entrapment in the lot across from the Residence Inn.”

Phish also questioned the motive of the company and why it did not properly inform those who want to park, shop and dine downtown, indicating it is rather discouraging visitors from doing so.

Dr. Anthony Cipolla, chairman of the Williamsport Parking Authority, said he could not speak for The Liberty Group but could see the push-back happening because the enforcement will continue Monday through Friday at all hours of the day.

Williamsport Parking Authority maintains enough of its lots, and there are two parking garages and enough off-street and on-street parking spaces downtown for people to shop, dine and be entertained for a few hours, especially on the weekends, Cipolla said.

“People need to read the signs and not park in private areas where they can receive tickets and be towed,” he said.

Cipolla made clear the Williamsport Parking Authority is not involved with The Liberty Group’s recent decision nor does it condone its practice.

He said most street meter parking and lots downtown are free after 5 p.m.

The authority also has reduced by half the evening rate in the garages, he added.