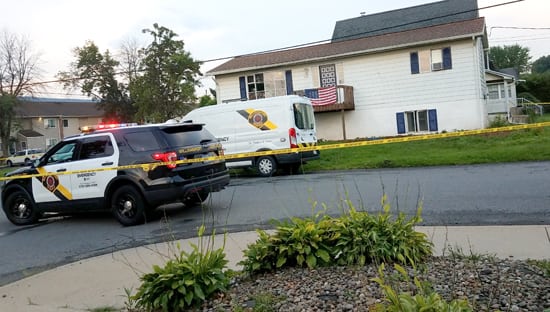 PHILIP A. HOLMES/Sun-Gazette Police vehicles are parked outside the home of Ed and Sonja Heck on Linn Street in Newberry, where Sonja’s body was discovered Friday afternoon.

Outside Ed and Sonja Heck’s home at 2501 Linn St. is a makeshift memorial of stuffed animals and three artificial flowers.

Neighbors set up the memorial to honor 49-year-old Sonja Heck, who, city police said, was murdered sometime Thursday, allegedly by her husband, inside the two-story home.

“She didn’t deserve this, nobody does. There are always other alternatives (to killing someone),” one of the couple’s neighbors said Sunday, declining to give his name.

“She was very nice, very pleasant,” the neighbor, a city native, added.

“He killed her, hopped in his vehicle and took off,” the neighbor said of Heck.

In addition to killing his wife, Heck, also 49, “maliciously caused the death of his two dogs by committing blunt force trauma to their heads,” said Agent Edward Lucas, the lead investigator. The dogs were found in the basement, one investigator said he was told.

Police have not disclosed where Sonja Heck’s body was found in the house.

Police had a different spelling of her first name in a news release made public shortly after her husband was arrested late Friday night at a motel in Lebanon, Indiana, a city with a population of about 16,000 in the northcentral part of the state.

Police declined to comment on the motive behind the killing, but Lucas stated in an affidavit that “a couple weeks ago,” Ed’s stepdaughter, Emily Rowe, of Williamsport, “caught her stepfather cheating on her mother, and that this caused hardship” between the Hecks.

Sonja Heck “also demanded that her husband take his two dogs to the SPCA (the Society for the Prevention of Cruelty to Animals) because she no longer wanted them in the home,” Lucas said.

Police responded to the house, which actually faces Wayne Avenue, after Rowe discovered her mother’s dead body about 4:30 p.m. Friday.

Rowe had “received a text on Thursday from her stepfather, which read, ‘I’m sorry. I didn’t do it’ or words to that effect. Emily thought it may have been a mistaken text, not meant for her, so she ignored it,” Lucas said in the affidavit.

However, Rowe became more concerned the next day after she received a call from her mother’s employer that her mother had not shown up for work, Lucas said, adding Rowe then went to the house and found her mother dead.

“While at police headquarters following the discovery, Rowe received text messages from her stepfather advising her not to go into the house,” Lucas said.

Among evidence police recovered inside the house was a “note left on the kitchen table,” Lucas said, but he did not disclose what was written on it. However, it was one piece of key evidence that led Lucas to file homicide charges against Heck.

About 8 p.m., city police received word that Ed Heck’s vehicle was spotted near a motel in Lebanon, Indiana, where he fled following the homicide, Lucas said. Heck was taken into custody at the motel without incident and is being held without bail at the city jail, awaiting extradition to face city police charges of homicide, aggravated assault and cruelty to animals.

An autopsy will be done on the victim at 10 a.m. today at the Lehigh Valley Hospital in Allentown, Jerold Ross, Lycoming County’s chief deputy coroner, confirmed Sunday night.

Police and neighbors said the Hecks had moved to the Linn Street home from Exeter in Luzerne County, so that Sonja Heck could be closer to relatives.