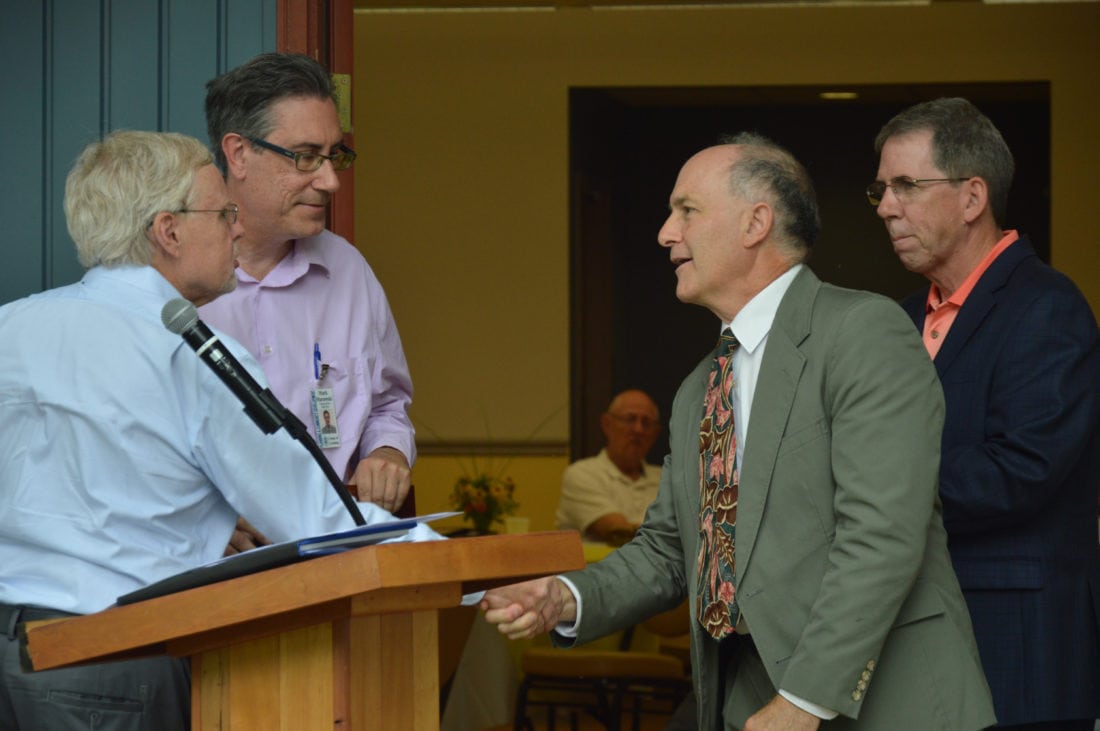 The Susquehanna River Walk was one of three greenways or trails statewide designated a Great Place in Pennsylvania by the American Planning Association Pennsylvania Chapter in a surprise announcement during STEP Inc.’s Pathway to Fitness dedication on Friday at the STEP RiverWalk Center in South Williamsport.

“You have done really outstanding work here. This is the best I’ve seen in the entire Susquehanna River basin and you should give yourselves credit for that,” said Dick Koch, of the chapter, who announced the designation. “Looking at what you’ve done now and what you have planned in the future — I think it’s one of the most remarkable stories up and down the Susquehanna River.”

The river walk now is one of 31 Great Places across the commonwealth, Koch said.

“It puts you in a rather elite group,” he said.

Jerry Walls, chairman of the board of directors for the Susquehanna Greenway Partnership and former director of county planning, applied for the designation, Koch said. He and others praised Walls, who was not able to attend the ceremony and see his vision come to light.

Great Places are designated based on their “sustainable vision for the future” and the ability to “serve as a model for other communities.”

The river walk was first envisioned in the year 2000, was included in the 2002 Susquehanna Greenway Partnership Strategic Vision and became a reality in 2008, Koch said. New connectors are being planned or already are in development, including at Basin and Maynard streets to connect the colleges.

“The river walk offers panoramic views of the river, as well as views of nesting locations for bald eagles and peregrine falcons and other migratory birds,” Koch said. “Public art displays and interpretive signage also add to the attractiveness as a scenic place to walk, run, bike or simply enjoy the outdoors. The river walk contributes not only to creating a healthy community … but it also stimulates the local economy.”

“I’ve been working here at Lycoming County for 32 years, and I’ve had the privilege to be involved in a lot of projects we had seen on infrastructure over the years,” Murawski said. “But the river walk was my favorite. There was just something about it … this project lit up the community with excitement.”

Even as the contractors continued building the river walk, people couldn’t stop themselves from climbing up and taking a stroll, he said.

“Well, if this is a prelude of things to come, it’s going to be really well-used,” he recalled thinking.

Murawski followed the ceremony with a reminder that there is more to come.

“This is a great place, but we can make it a greater place,” he said. “We are working on the design of a top-10 trail gap in Pennsylvania, which is extending this river walk from Maynard Street over to Susquehanna State Park.”