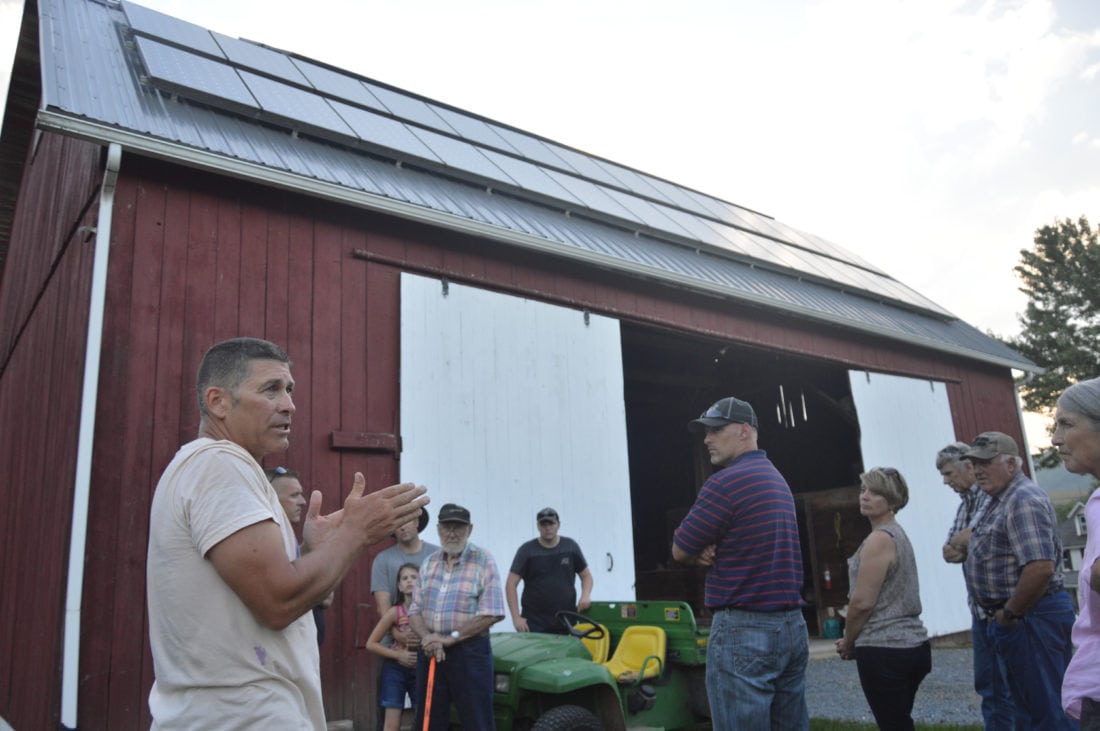 Ted and Tracey Barbour offered a tour of their family farm Monday evening in Cogan Station as part of the state Department of Environmental Protection’s Northcentral Regional Office’s DEP Connects program, which is meant to connect community members with the department for educational purposes.

The Conservation District named the Barbours’ farm “Cooperator of the Year” in 2013 for its environmental stewardship efforts.

Ted Barbour took over the farm from his father in 2005. Previously, the cattle had been pastured with access to a stream, which turned that stream into “a mudhole” — one that eventually feeds the Susquehanna, he said.

By connecting with state and county environmental agencies, Ted Barbour was able to change the layout of his pastures and turn the acreage including the stream into what is called a riparian buffer, meaning trees and plants were added to the stream’s banks in order to provide shade and reduce the nitrogen levels of the water.

Doing so helped clean the stream and cool the water temperature, making it more ideal for aquatic life. Likewise, the general area around the stream became more attractive to an abundance of wildlife, including many types of birds.

“What used to be a mudhole now is pretty dense with trees,” Barbour said.

Cutting off the cows’ access to the stream also may have positive effects on the herd’s health, said Michael Sherman, executive director of the U.S. Department of Agriculture’s Farm Service Agency Lycoming County. Minimizing access to swampy, wet areas can lessen the risk of foot rot and other health problems, he said.

“I’ve grown to expect good herd health because I’ve never known anything else while doing things like this,” Ted Barbour said.

The Barbours used to crop farm before switching to raising cattle for beef. Those cattle are free-range and graze all day, he said.

By keeping his fields high with grass, Barbour creates an “oasis” for birds — raptors can hunt there in the winter and the fields turn into a breeding ground for grassland birds in the spring, said Gary Metzger, vice president of the county’s Audubon Society, who attended the tour with binoculars in hand.

“This kind of habitat is perfect for birds,” he said. “It’s a little oasis.”

Tilling isn’t necessary for the Barbours, which means their soil stays healthy too, added Timothy Heyler, agricultural conservation technician for the Conservation District.

The Barbours also have juxtaposed their nearly-100-year-old barn with rows of solar panels on the southeast-facing roof, harnessing the sun’s rays to power their entire farm. The panels were a $20,000 investment that paid for themselves within about 4 1/2 years, Ted Barbour said.

“It is a hefty initial investment,” he said. “But now they’re a net revenue generator for our farm.”

In addition to the electricity savings, he also earns between $3,400 and $3,500 in solar energy credits each year, he added.

“The Barbour farm is a great example of taking voluntary, incremental, achievable steps that we hope others will emulate,” said Marcus Kohl, North-central regional director for the department. “One-by-one, these best management practices add up to create monumental change in the landscape.”