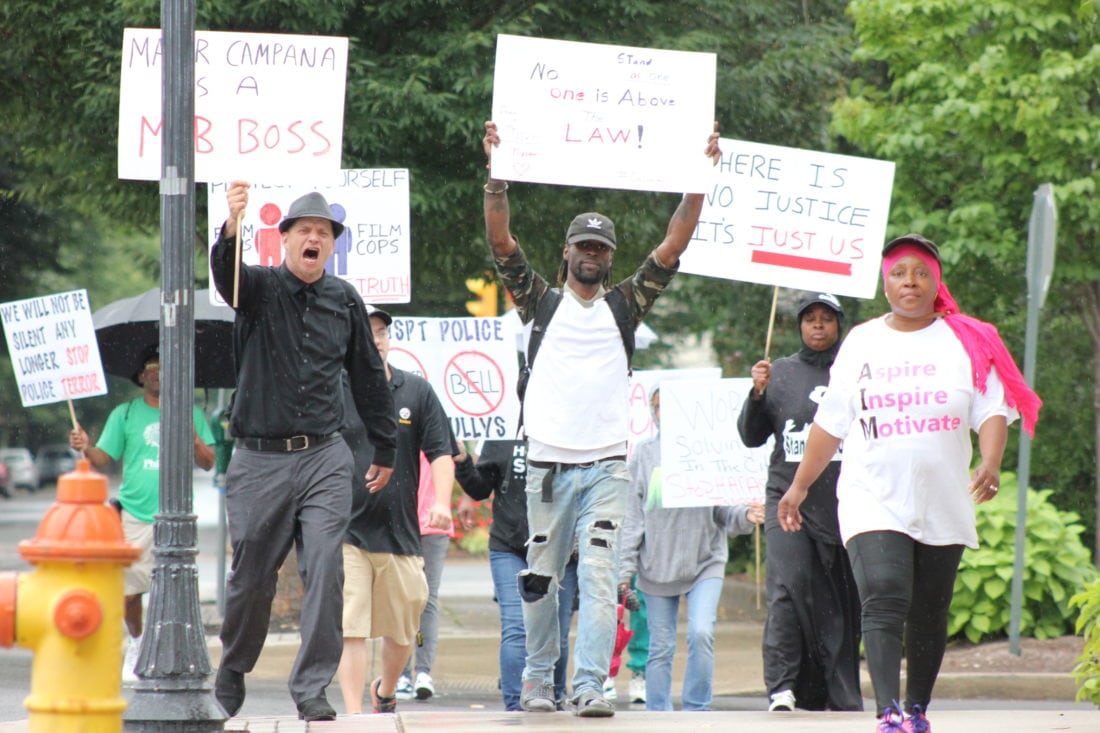 ANNE REINER/Sun-Gazette William Matthews, left, and Nelson Golden, center, organizers of Saturday morning’s peace march from Flanigan Park up West Fourth Street to City Hall, lead their group and yell chants as they make their way up the street.

“More than anything we’re trying to get insight.”

Nelson Golden summed up the goal of a Saturday march from Flanigan Park to City Hall with this statement before elaborating.

Golden said the purpose of the march was to “highlight the injustice going on behind the scenes” in Williamsport’s law enforcement and the Lycoming criminal justice system. While Golden and march co-organizer William Matthews questioned the conduct of some Williamsport Bureau of Police officers, they also questioned if low-level offenders — community members facing investigations for summary offenses or misdemeanors — are being pressured into the county’s re-entry program with threats of more serious and unwarranted charges, whether the police could be trained more specifically on de-escalating conflicts, if

the community can do more to improve job opportunities for former criminals and break the cycle of recidivism, if there are disparities in how better-connected community members are treated by police and prosecutors and if Williamsport should implement a citizen review board to evaluate the conduct and professionalism of police officers.

According to Golden, only 1 or 2 percent of police officers are problems, but noted the other 98 percent have to be in the lead in holding that 1 to 2 percent accountable.

“There are officers who are doing awesome things for the community,” Golden said.

He said several police officers have approached him and other activists to ask what can be done to resolve issues and improve community relations, and have listened.

Golden and Matthews also said some of the allegations of wrongdoing are being made by white community members.

“As citizens we have to follow the law,” Golden said. “The law should apply to everybody, not half-time or part-time.”

Tamika Moore, Brown’s mother, was also present at the march and said her perception of the police has changed over the years.

“I remember when I was a child, and my mother told me, if you see a stranger or are afraid, call the police,” Moore said. “Now, we tell our children if they see a cop to get your phone and start recording.”

Another issue raised by participants in the rally was the way they perceived the rash of fatal overdoses and domestic violence allegations against Mayor Gabriel Campana were “swept under the rug” last year as the community prepared for the Little League World Series.

“Everything disappears during Little League,” one man said. “It happens everywhere. Don’t act like we’re the perfect town where it doesn’t happen.”

Golden and Matthews said while the number of complaints have increased in the video’s wake, there have been complaints against some police officers going back well before the video.

“We need to take more control of our community,” Golden said. “Everybody is speaking on this now.”