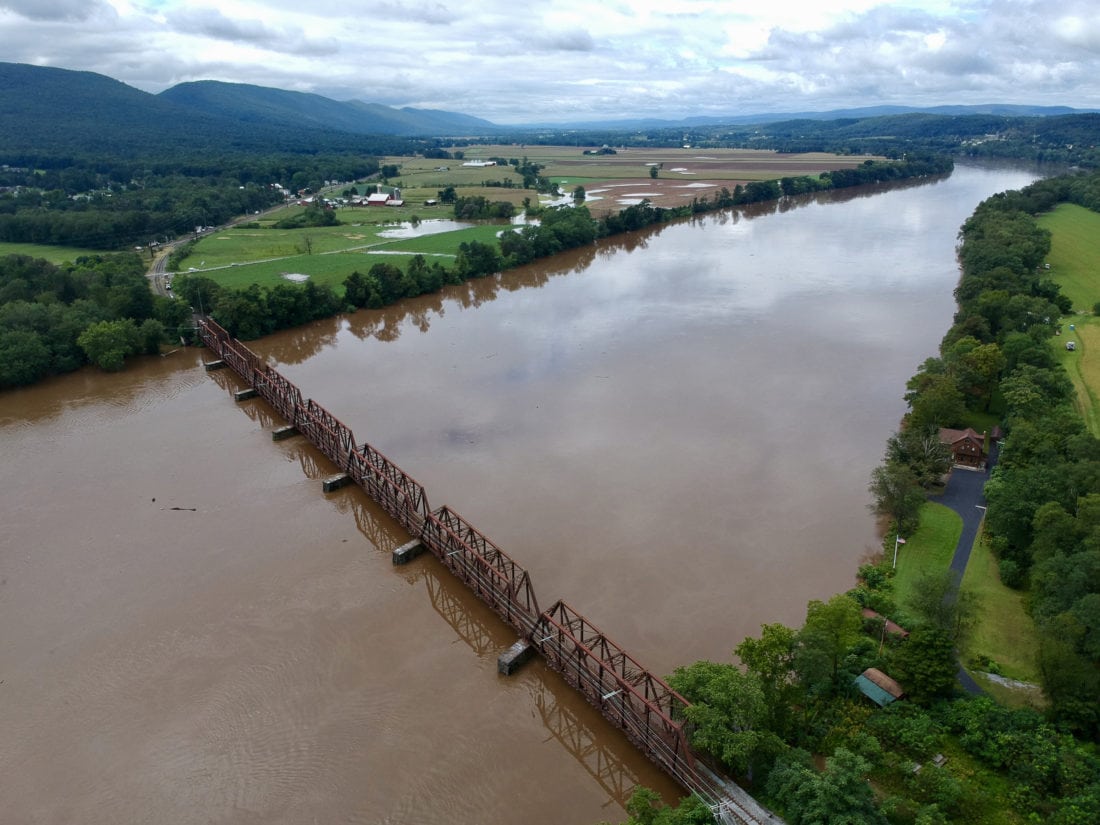 KAREN VIBERT-KENNEDY/Sun-Gazette A swollen West Branch of the Susquehanna River flows under the railroad bridge near the Linden Boat Ramp in Woodward Township on Tuesday.

Though Tuesday offered a bit of respite from the rain, Lycoming County residents in flood-prone areas are encouraged to stay on the alert, said Dan Dorman, county emergency management coordinator.

“We are three-quarters of an inch in one hour from another flash flood,” he said, based on data from Tuesday afternoon. “In three hours, we could take 1.2 inches. That’s not a lot of rain, compared to what we’ve been getting lately.”

Although the Susquehanna River crested and water levels seemed to start going down Tuesday afternoon, more rain was on its way from the Sunbury area and showers could last tonight into Thursday, said Barry Lambert, meteorologist with the National Weather Service in State College.

The county declared a disaster emergency early last month after severe rainfall at the end of July and beginning of August.

“Ironically, FEMA (the federal Emergency Management Agency) was scheduled to come in next week to review damages with the municipalities,” Dorman said, “but they were re-routed because of the hurricane coming up the coast.”

That first round of storms in July and early August dealt the heaviest damage in the eastern areas of the county, he said. Monday’s rain event covered most of the county and a good part of the state, causing a surge in water levels as the river absorbed rainfall from the west.

Some municipalities already have submitted for disaster declarations, pending damages and are waiting on water levels to recede to see the full extent of damages, Dorman said.

Because of the constant rainfall, the county landfill has spent tens of thousands of dollars on trucking out leachate, or wastewater.

“Just in 2018, we have spent $86,000 roughly on external trucking, $135,000 in treatment between three facilities,” said Jason Yorks, director of Resource Management Services. “Total, internally, we’ve spent about $248,000 on trucking costs, manpower, everything else.”

The landfill is required by state Department of Environmental Protection regulations to properly dispose of leachate and is not allowed to let its leachate tanks exceed 25 percent capacity under normal conditions, Yorks said.

“These aren’t normal conditions, but we still have to make every effort,” he said.

In addition to the leachate issue, the rain also speeds up erosion, makes it more difficult for employees to maintain the working face, causes drainage issues and beyond.

Over the past several days, the county has averaged about 3 to 3 1/2 inches of rain, Lambert said.

Though showers expected to continue today into tomorrow, potentially bringing up to another inch of rain, Lambert said he is hoping for a bit of a dry spell this weekend.

“Hopefully it’ll stay dry enough to allow some people, including myself, to get out and get some yard work done,” he said. “It’s all dependent on the exact track of this hurricane.”

Hurricane Florence is not forecasted to be close enough to cause a whole lot of rain, yet, he said.

“We’ve experienced a lot of times, if the hurricane is far enough away, we experience some of the most beautiful weather we can have in the fall.”

As Florence nears the coast down south, the forecast shows high pressure pushing dry air into the area and possibly holding on through the end of the week, if not into the weekend, Lambert said.

“Odds are increasing that it’s going to be mainly dry with temperatures looking more normal, which are in the high 70s,” he said.

The forecast shows a high of 79 on Friday, and about 80 on both Saturday and Sunday, he added.

Early next week, however, the hurricane is forecasted to turn north and come closer, bringing more water. If it doesn’t turn back to sea fast enough as it climbs the coast, the area will see bands of heavier rain, Lambert said.

Most effects will be seen Sunday night through Tuesday, he said.

“The most prudent thing for everyone to do is to be prepared,” Dorman said, adding that most of Lycoming County floods are due to hurricanes. “With already saturated grounds, the timing’s not good. Everyone should have their plans on how to evacuate … all their disaster supplies ready.”

• Route 405 between Front Street and Suquehanna Trail in Turbot Township.

• Route 405 between Boyer Road and Route 45 in West Chillisquaque Township.

• River Road between Front Street in Lewisburg to Route 15 in Kelly Township.

• White Deer Pike between Old Route 15 Road in White Deer Township and the river bridge to Watsontown a the Northumberland County line.

Long-term detours due to flooding

• Homets Ferry Road between Arrowhead Lane and Route 2038 (To The Ferry Road) in Wyalusing Township. The detour is Schoolhouse Road, River View Road and Pond Road.

• To The Ferry Road at the intersection of Homets Ferry Road in Wyalusing Township. Access is via Route 6.

• Monkey Run Road between the South Creek Township line and the Berwick Turnpike in Ridgebury Township. The detour is Gee Road.

• Winding Road between Route 487 and Ridge Road in Fishing Creek Township is closed. The detour is Route 487, Route 239, Bendertown Road and Ridge Road. Work on this road, as well as permanent repairs to Zaners Bridge Road, is expected to begin Monday.

• Zaners Bridge Road just east of Honeytown Road in Fishing Creek Township. There is access to the road on either side of the closure.

• Millville Roadbetween Route 42 in Hemlock Township and Route 11 in the Town of Bloomsburg is closed. Detour is Route 42 and Route 11.

• Fox Hollow Road between Route 44 and the Lycoming County line in Anthony Township.