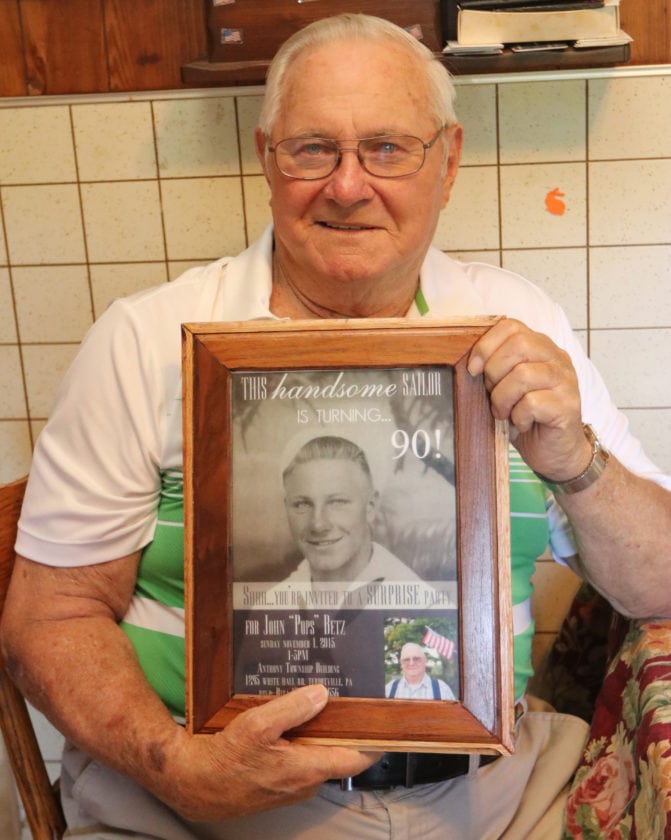 John Betz can recall the U.S. flag being raised at Iwo Jima.

It was near the end of World War II, and he was on a boat with his fellow shipmates, watching the historic event.

The Battle of Iwo Jima involved U.S. Marines and Japanese forces in early 1945.

The island, located about 750 miles off the coast of Japan, was the scene of some of the bloodiest fighting of the war, with more than 20,000 Japanese reportedly killed as well as nearly 7,000 Marines.

“We could see it from our ship,” Betz, 92, said, recalling the flag going up. “You know, they raised it twice. The Japanese took it down the first time.”

Like many young men coming of age in the 1940s, Betz wanted to be part of perhaps the biggest event of the 20th century and fight for his country.

He had just graduated from Turbotville High School in 1944 and was looking to enlist.

But there was a problem.

With two brothers serving in the military, his father wanted him to help around the family farm.

“My dad got me deferred,” he recalled.

Eventually, his father relented and Betz chose the Navy over other military branches because “I didn’t want to live in a foxhole.”

He spent the first part of his enlistment in the latter part of 1944 stateside in New Jersey and Norfolk, Virginia.

Late that year, he left on an ammunition ship for the Philippines.

“Me and a guy from Danville volunteered for that ammunition ship,” he said.

He knew he might be in for some action out in the Pacific Ocean, that he was really in the war now.

Betz didn’t get blown up.

He spent much of the time carrying out his assignment of helping his shipmates load and unload ammunition to and from other boats.

It was often hard, busy work. Much of the ammunition was heavy.

But Betz can also recall a number of bigger, more dangerous skirmishes involving the U.S. and Japanese forces out in the Pacific.

He recalled U.S. ships struck by Japanese planes during the Battle of Iwo Jima.

“There were bullets flying all over,” he said. “That was the worst I saw.”

Much of the time, he and his shipmates didn’t know where they were going or where exactly they were out there in the vast Pacific.

He knew he was part of some climactic events such as the liberation of the Philippines and Iwo Jima.

Among the most heroic acts he witnessed were the U.S. troops going ashore and furnishing ammunition.

Betz said he was fortunate not to have been killed or even wounded. Looking back, he said he was never too worried about anything happening to him.

He simply felt, he said, that things would work out.

He remembered a Japanese torpedo that struck a nearby U.S. carrier.

“I might have been a little scared that time,” he admitted.

Betz received a number of commendations for his war service, including the Pacific Theater Ribbon, Victory Medal and the Philippine Liberation Ribbon.

“Well, I was glad to be out,” he said. “But if there would have been another war, I’d have gone back.”

He returned home and eventually got back into farming.

He married the former Susie Gordner, of Unityville, who, like Betz, was raised on a farm. Together, the two raised five children.

Their home, just outside the village of Exchange, is a testament to their celebration of family. Photos of children and their many grandchildren decorate the walls.

These days, he and his wife enjoy relatively good health. Betz has a cane but claims he really doen’t need it.

Asked if he ever reflects on his war days, he said, “There are not too many days when I don’t think about it.”