Democracy and politics on display in city election 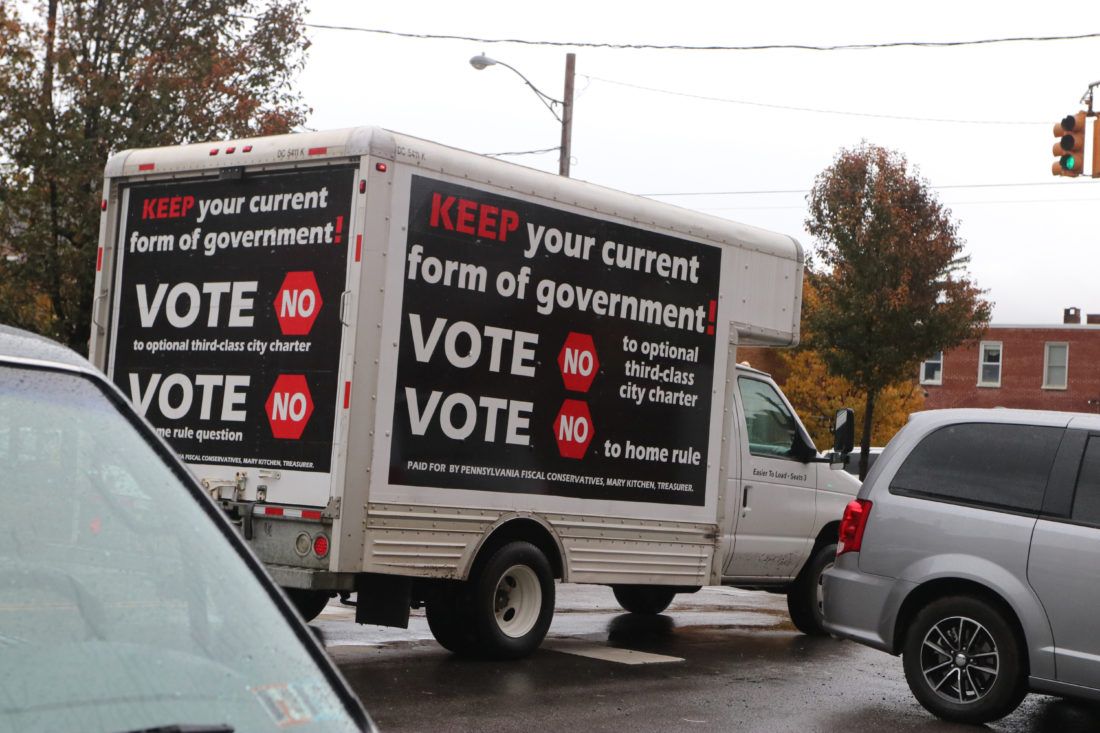 It was democracy in action at the polls in 2018.

Voters soundly rejected referendums calling for the replacement of a strong mayor-council form of government with a council-manager, as recommended by two study groups this year.

Nobody knew going in what would occur based on the turnout at the polling stations on Nov. 6.

A few of the voters were questioned in exit polls.

“I want to see a professional manager,” he said outside St. Joseph the Worker Parish polling station.

Michelle Derrick voted in Newberry and said she wanted to retain the position of mayor, even if not the current one.

“Voted ‘no’ … I’ve seen this before,” said Bill Lantz, referring to the 1972 change to the strong mayor form of government from the commission form in the city.

Later that night, the 17 voting wards in Williamsport revealed a landslide decision of the voters to retain the strong mayor form of government, something that left those who spent the year studying and advocating for change “a bit disheartened,” in the words of Fred Holland, chairman of the charter commission.

Holland was not only referring to the loss, but to an 11th-hour advertising blitz by a group called the Pennsylvania Fiscal Conservatives.

Its members called for city voters to vote “No” at the polls on Nov. 6.

Holland said that was fine, but the attorney noted how it diminished the efforts and months of study that voters had approved and elected them to do just one year earlier.

“In the end, the charter commission wanted a professional manager who would provide more administrative oversight and have greater ability to manage the complexities city governments face, including funding, revenue-production, taxation and daily operation of the city,” Holland said.

According to campaign finance records at Voter Services, Pennsylvania Fiscal Conservatives spent about $22,997 on advertising against the referendum questions.

The Williamsport/Lycoming Chamber of Commerce also came out publicly against a change as recommended by either of the two commissions.

“I agree completely with the decision to strongly recommend a ‘No’ vote,” said Vincent Matteo, chamber executive director.

“The chamber executive committee believed no compelling argument was made by either group to take such a big step as changing the form of government,” Matteo said.

“While the city, like all cities its size, have challenges, we did not believe the cause was the form of government,” he said. “In fact, all things considered, we believe Williamsport is in much better shape in virtually every area than comparable communities.”

So the outcome means that the position of mayor will be on the ballot in 2019. So far, two people — Eric Beiter and Councilman Don Noviello — have thrown their hats into the ring.

Only Campana knows if he will run for mayor again.

Regardless of the outcome, the effort placed on studying local government this year should not be viewed as time wasted, one person noted.

“Although the electorate made their decision to maintain our current form, both studies embody democracy in action,” said Matilda Noviello, of the home rule study group.

“As an elected commissioner of the home rule study, I am honored to have had the opportunity to civilly engage in this process and make a mark on our city’s history,” Noviello said.

“Should the question arise again, we now have a framework of understanding both the optional charter and home rule and state home rule procedure,” she said. “Perhaps our efforts today will serve as an invaluable tool for generations to come.”