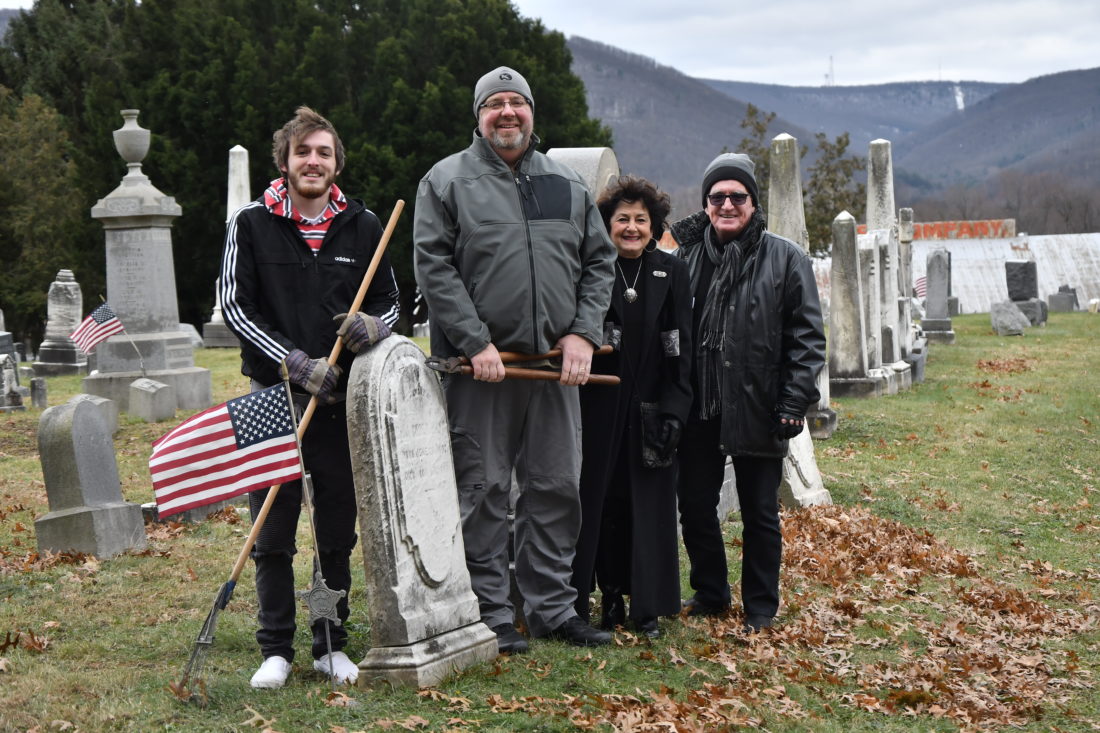 MARK NANCE/Sun-Gazette The Lycoming County Adult Probation Office (LCAPO) has taken up the task of maintaining the Williamsport Cemetery. From left is Devin Grassmyer of South Williamsport, Jeff Whiteman, probation officer with the LCAPO, Peachie and Tom O'Connor of Williamsport.

When Peachie O’Connor of Williamsport posted to Facebook late this past summer, in search of volunteers to clean up the Williamsport Cemetery on Washington Boulevard, a light bulb lit up for Jeff Whiteman, a probation officer with the Lycoming County Adult Probation Office.

“I told her, ‘If you can get the equipment, I can get the guys,’ “ Whiteman recalled while meandering through the cemetery on a chilly November afternoon.

Their conversation gave birth to a beautiful partnership.

Whiteman and a coworker gathered a group of parolees in need of community service hours and, along with O’Connor, her husband Tom, and many other volunteers from the community, undertook a massive clean-up effort.

After several weeks of upward of 20 volunteers mowing, trimming, raking and carefully cleaning off headstones, the Williamsport Cemetery was returned to the kind of condition that should be expected of any burial ground, let alone one that is the final resting place for many people prominent in the city’s history. Among them are the city’s founder Michael Ross and a state governor from Williamsport, William F. Packer.

“They saved the day,” Peachie O’Connor said, gesturing around the cemetery with a bright smile on her face despite a brisk wind. “I turned to Facebook and found that many people shared my feelings. We were blessed to have people respond right away.”

For parolee Devin Grassmyer of South Williamsport, the prospect of cleaning up the cemetery started as a way to take care of his community service requirements. But his mindset changed soon after meeting O’Connor, he said.

“Just imagine, this sweet lady trying to take care of the cemetery by herself,” he said. “I figured, I’ve done so much bad, it was time to do some good. It was a great project.”

Whiteman indicated that Grassmyer wasn’t the only person who had a change of heart.

“It became something they wanted to take care of,” he said of the cemetery, which is much larger than it appears to be from the boulevard. “When you look from the street, it doesn’t seem that big. It would’ve taken quite a long time if (the O’Connors) tried to do it on their own.”

Though the weather has put some clean-up efforts on hold, the O’Connors, Whiteman and many of the volunteers intend to continue maintaining the cemetery when they’re able.

“He’s retiring, but he’s even committed to helping next year,” Peachie O’Connor said of Whiteman, who retired at the beginning of December.

“It’s baby steps for now,” Whiteman said of caring for the cemetery.

Plans are in the works to repair some of the older graves, many of which date back to the early 1800s and are crumbling due to age and lack of maintenance, and to find financial sponsorship, he said. The volunteers also hope to bring in students from Pennsylvania College of Technology through a program the college offers that pays for materials and equipment in exchange for the opportunity for students to get hands-on work experience.

The project has been a real community effort; from the small group of volunteers who tried to maintain the cemetery earlier in the year but struggled due to lack of numbers, equipment and funding, to the larger group that formed in response to her call to action, O’Connor said.

Even the city’s Streets and Parks Department got in on the clean-up, helping to mow and remove bags of clippings and leaves, even though the city does not own the cemetery and is not responsible for its maintenance.