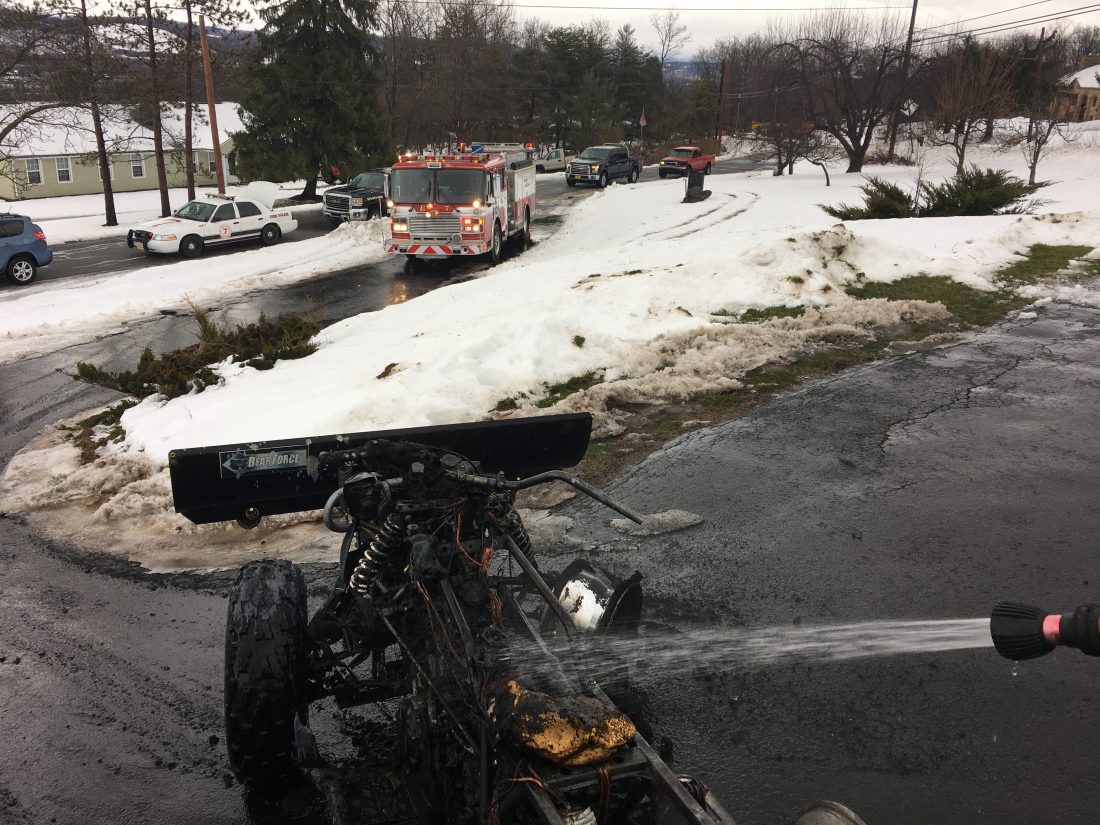 NESBIT — A Comcast worker saved a local homeowner thousands of dollars in fire damage, Thursday, after moving a flaming four-wheeler away from a home at 66 First Ave. in Nesbit.

Len Schenck, of Mill Hall, said he was traveling along Route 654 to another job when he noticed smoke rising from a home’s garage.

“Something was just wrong,” he said. “The smoke was too dark, and it was weird to see it come from that close to the house. It couldn’t have been a burn barrel.”

Passing it once, but turning around, Schenck said he drove to the house to see a four-wheeler engulfed in flames.

A dog could be heard barking inside the house as Schenck tried to alert any occupants of the house, but no one was home. He grabbed his Comcast-issued fire extinguisher and emptied it at the base of the flames as one of the four-wheeler’s tires exploded.

“I had to check myself to see if I was OK,” said Schenck.

A neighbor, who later left before giving his name, came to the scene and brought his own fire extinguisher. But the flames spread.

“It just wasn’t working with all the rubber caught on fire,” said Schenck.

The two were just deciding to move the four-wheeler from the house using the neighbor’s truck and a ratchet strap when the fire caught the fuel tank on fire.

The fire plumed into the sky and the siding on the house began to melt, he said.

Soon after, the neighbor backed his truck up to the engulfed four-wheeler and Schenck attached the ratchet strap.

He added that he was shaking for a few hours after the event.

The two successfully moved the four-wheeler to a location where it wouldn’t catch the house on fire and the firefighters came soon after to finally put the fire out.

“I just know that if it were my house, I would have wanted someone to help out, too,” said Schenck

A call was placed to Nesbit Volunteer Fire Co. at around 1:50 p.m. to First Avenue in Nesbit, said James Phleegar II, fire chief.

Although the fire is not suspicious, the fire marshal will come to investigate, he said.

“Them doing that and finding the fire, saved the house,” said Phleegar. “It could have been a very different story.”