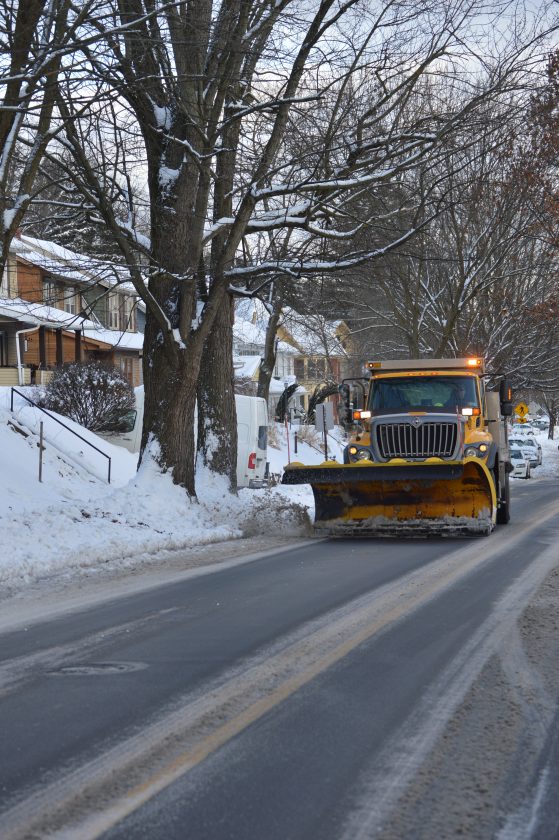 For the second morning in a row, area residents woke up today to temperatures near 0, with wind chills around -10.

The forecast is for slightly warmer temperatures today, with a high in the 20’s and dry, according to Bill Gartner, meteorologist with the National Weather Service in State College, but that will end tonight as a weak weather system comes through the area, bringing with it freezing rain and sleet. Icy conditions continue through the night and the morning should be “pretty slick,” Gartner said.

With a warmup Wednesday sending temperatures above the freezing mark into the upper 30’s, the frozen precipitation should turn to rain, he said. Chance of precipitation is 90 percent.

A cooling off Wednesday night to the mid-30’s will bring with it rain and snow before another system on Thursday brings in cold, dry air. Gartner noted that temps will not be nearly as cold as the beginning of the week.

Friday’s high will drop back to the upper 20’s as the weather becomes more unsettled, Gartner said.

To protect against the bitter wind chills, Gartner suggested “doing all the things your mom told you to do.”

Wear a hat and gloves because the body’s extremities are most likely to be affected first by the cold. Use a scarf to cover your mouth because breathing in the cold air is not good, even if you are going outside for a short period of time.

The meteorologist also said when travelling it is a good idea to pack extra warm clothing and emergency supplies in case the vehicle gets stuck or disabled.

Clearing the streets of the snow that fell Saturday into Sunday also is hindered by the frigid temperatures and is proving a challenge to the city’s streets and parks department, according to its director Adam Winder.

He said anything that has melted has refrozen because of the drop in temperatures. Winder noted that because of the storm and the three-day holiday, traffic has been lighter and heat from tires can’t activate the salt applied to the streets to aid in melting the ice.

Currently, two loaders and two dump trucks are trying to clear alleys and intersections, but because of refreezing, the icy snow is difficult to push, he said.

“We have 26 guys and they are stretched thin,” he added, and with warmer temperatures and rain forecast mid-week, the problem will be compounded.

“The rain is going to be an issue,” Winder said. “Everything is a big challenge.”

Keeping indoor water pipes from freezing is also a big challenge when temperatures remain frigid for an extended period of time.

According to Edwin Smith, co-owner of Plumbing Masters, a few things can be done to prevent finding yourself without water due to frozen pipes.

He noted that some people turn on faucets to a trickle to keep the water flowing through pipes because moving water doesn’t freeze as quickly, although that only helps down to a certain temperature. Pipes also should be insulated against the cold, Smith said.

If they do succumb to the cold, pipes can be defrosted slowly by using a hair dryer, he said. Doing the process slowly is important. “Don’t put a torch or fire on them,” he added.

He also would not recommend wrapping pipes in heating tape.

“You won’t know if it goes out and your pipes will freeze or there could be a short in it,” he said, which could present a fire hazard.