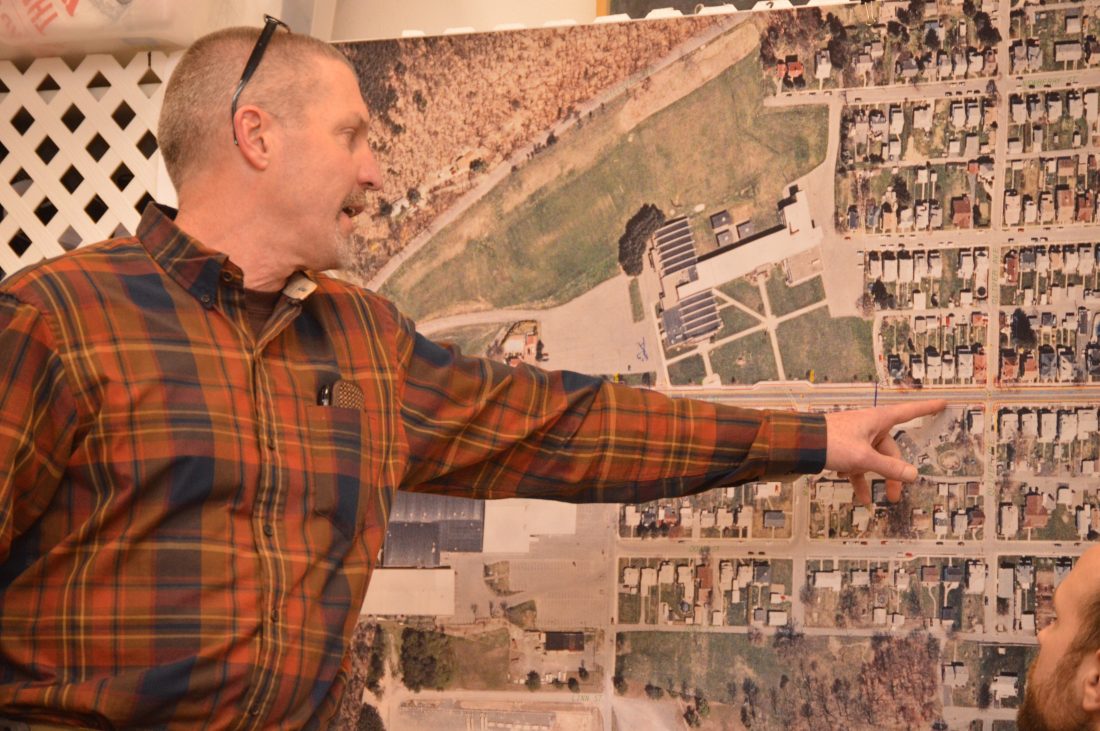 Jay Miller, assistant construction project manager for PennDOT's Fourth Street project, detailed what the project entailed for the residents who attended a meeting Tuesday night to voice their concerns.

Presenting concerns about how Fourth Street will look, and 51 trees slated to be cut down, and other matters relating to a proposed PennDOT construction project, residents of Newberry attended a meeting with representatives of the state’s highway department, the water and sanitary authority and the city streets department on Tuesday.

“We just want to be heard,” one resident said.

Lozano detailed what the project entailed, but admitted the reason most of the people were there was because of the trees. The majority of the trees affected are between Arch Street and Oliver Avenue.

“The trees are going to be removed because of the construction activities,” she said. “What we’re doing is going to wind up damaging the tree roots and ultimately killing the trees. That’s why the trees are coming down.”

The sidewalks will be widened to five feet to make them compliant with the American with Disabilities Act, Lozano said, making the space too narrow for trees.

It was noted during the meeting that a city ordinance governed the space needed to plant trees in the area between the sidewalk and the curb.

The city’s ordinance requires a 30-inch green space for a tree to be planted, according to Adam Winder, director of the city’s street department.

“From the city’s standpoint, once the project is over we’re willing to go in and look to see if there are spaces we can put trees,” he said. He noted that it would depend on the types of tree also.

The audience of about 40 people cited shade plus the noise reduction trees provide as major reasons for not wanting to see the trees taken away with none planted at the end of the construction project. It could be more than two years until any trees could be planted along the street, if at all.

“I think for the property owners on Fourth Street, the trees can be a serious benefit,” said Councilwoman Liz Miele who attended the meeting.

Lozano said there is a possibility since the section at issue is still in design that PennDOT could go back and look at the design to see if any changes could be made.

“The reason we have meetings like this is to get the pulse of the people who will be immediately affected by it,” said Bob Woodley, moderator of the meeting.

“I think we have a pretty general concensus, whether or not you want trees. It seems to me that we’re not able to get what we want. We’re afraid once the project is done maybe they’ll take a last look at it and say, ‘Well maybe after all we don’t have room for any trees.’ And that’s just the way it’s going to be and we’re afraid our hands are tied in this matter and we just want to be heard,” he said.

Miele echoed many of the residents’ concerns.

“It seems to me that what we’re hearing is that there are issues with the tree removal because it creates a neighborhood feel, and there’s issues with anything involved with the reconstruction of Fourth Street that makes it more of a primary thoroughfare and less of a community street. So it seems to me that part of reaching out and communicating with PennDOT about the reconstruction needs to focus on not just the trees, but talking about this is a community, it’s a neighborhood, so to treat it as though the most important thing is to make it easy to get from the highway to the other end of Fourth as fast as possible is not in line with what the people who live along the street want,” Miele added.