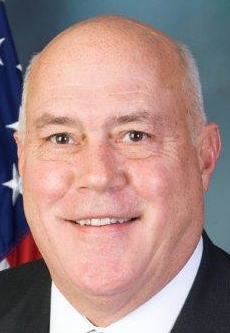 State Rep. Jeff Wheeland, R-Loyalsock Township, has announced his candidacy for U.S. Congress and his intention to participate in the Republican conferee process officiated by the Republican Party of Pennsylvania.

Wheeland, who has represented the 83rd state House District since 2015, formerly served as a Lycoming County Commissioner.

He noted his experience in county and state government.

“I just love helping people,” he said. “I just want to serve the folks.”

Wheeland, who is seeking the 12th Congressional seat held until recently by Tom Marino, stated he wants to fight for conservative principles.

He noted his support for Donald Trump’s America First Agenda and his concern for the current state of affairs in Congress.

Wheeland called for an end to political gamesmanship and to work toward securing the U.S. border and building a wall.

“I am adamantly opposed to the big government, anti-job agenda being pushed by Speaker Nancy Pelosi and the progressive wing of the Democratic Party. I am a reformer, support term limits and believe we must drain the swamp.”

Wheeland noted he is a member of the National Rifle Association and is pro-life.

He pledged to be an active member of Congress and to be a consistent presence in each county of the district.

He vowed to work collaboratively with all levels of government to provide the best level of services while being a good stewards of taxpayer dollars.

Prior to being in public office, Wheeland worked in the family business, Home Service Business. He later took it over and started another business, First Ice.

A graduate of Montoursville Area High School, he graduated from the former Williamsport Area Community College with an associate’s degree in business management and earned post-secondary business courses at Lycoming College.

He is a graduate of the County Commissioners Association of Pa. Academy of Excellence.

He served as director of the Malt Beverage Distributors Association of Pennsylvania. He is a member of the Young Men’s Republican Club, Moose Lodge 866, Consolidated Sportsmen of Lycoming County, Sons of Italy, Williamsport/Lycoming Chamber of Commerce, and the Lick Run Hunting Club.

He and his wife, Kimberly, make their home in Loyalsock Township.