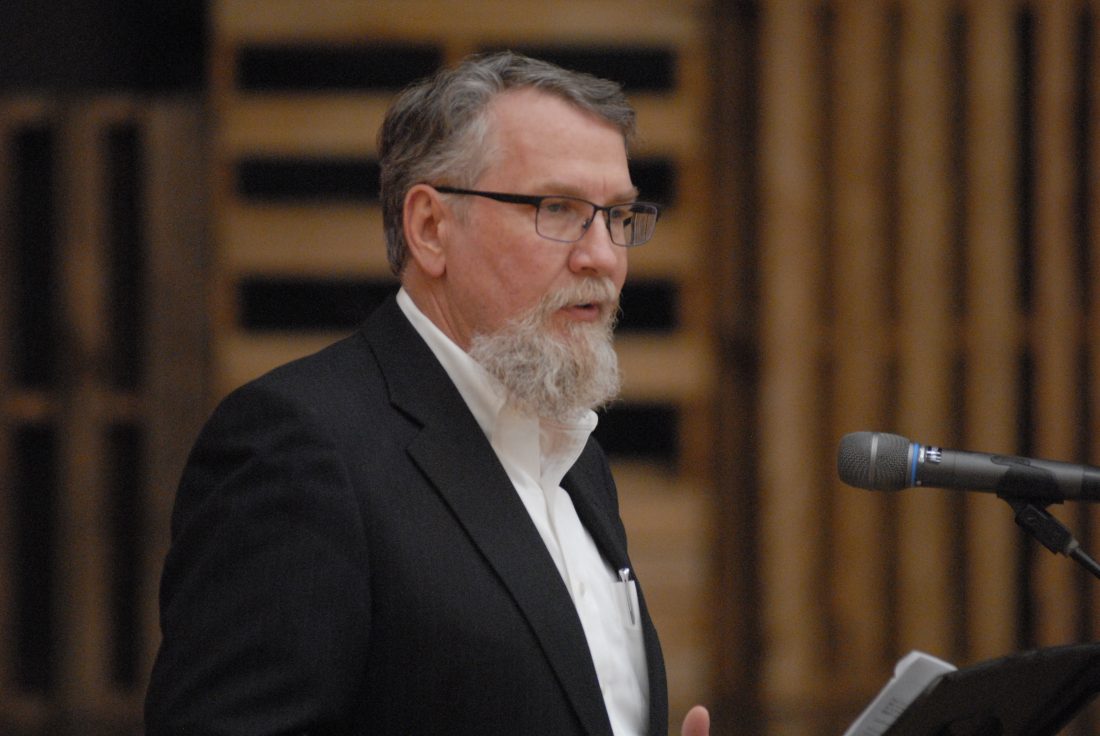 MUNCY – Local farmers were recognized for their contributions to the surrounding environment, Tuesday, at the county conservation and Penn State Extension awards banquet.

In the keynote speech, John Norbeck, deputy secretary of parks and forests, outlined the major issues the DCNR are dealing with in managing 2.2 million acres of state forests, to the crowd of over 130 people attending the event at Muncy First United Methodist Church.

Pennsylvania is experiencing the most severe storms the state has ever seen, according to Norbeck.

“In 2016, there was about $10 million of damage to the forest and we’re still working on those projects.”

The heavy rainfall of 2018 has stymied the work with landslides causing yet more damage.

“So as a reaction to that, the department put together the climate action,” he said. “It tasks each bureau of the department to do 174 actions that our folks can take to decide things sustainably.”

DCNR, through the Green initiative, is investing in solar arrays, which they have estimated will save the state $500,000 in 2020 by using renewable energy.

One-hundred years of conservation work in the state are at stake if youth don’t understand the value forests bring to the quality of life of all citizens, he said.

In fact, DCNR’s predecessor agency was formed 125 years ago, and was called the Department of Forest and Waters. Originally, that agency’s main concern was the damage the over-harvest of timber had caused to the quality of water.

DCNR continues that legacy today, according to Norbeck, who said water quality is vital to the mission. As such, the department gives $3 million in grants to help support clean water.

Advocating not just for the environment, but the people who work there. Norbeck said DCNR is working with the Department of Insurance to help lower the cost loggers have to pay out of their checks.

Currently, Pennsylvania loggers pay 83 cents on the dollar for insurance, said Norbeck, overburdened with those costs, the companies have little choice but to hire less people.

“That makes it even more dangerous,” said Norbeck.

Tom Leidy received the Forestry Stewardship Award for his efforts to keep his farm sustainable by completing the DCNR’s Forest Stewardship Plan. Leidy implemented woodland management practices that benefited multiple wildlife species on his property, including the Golden Winged Warbler and the Cerulean Warbler, a federally listed and species of concern, respectively.