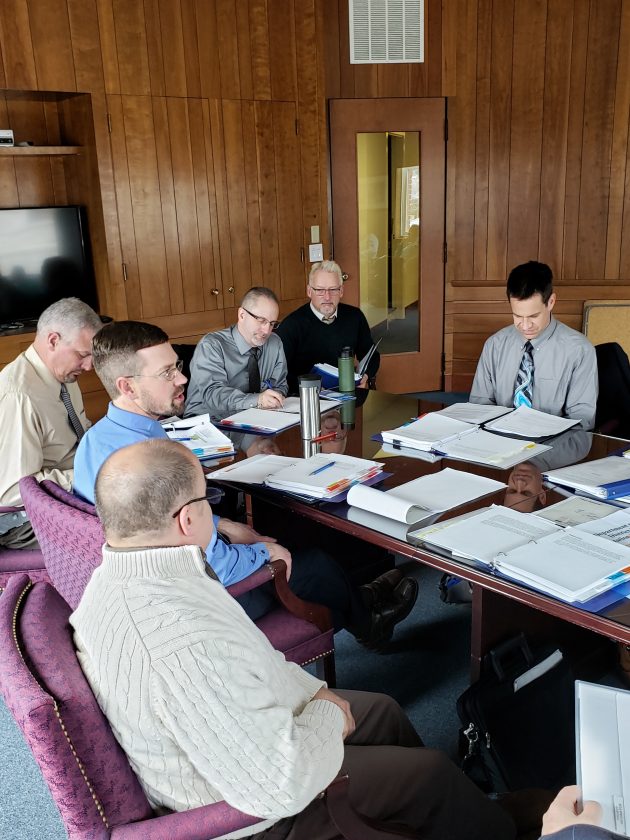 PennDOT District 3-0 officials recently met with Sun-Gazette editorial staff to review budget expenditures and major projects in the area, including the routes 220 and 405 intersection, Route 220 safety corridor in Woodward and Piatt townships, and The Central Susquehanna Valley Thruway projects, among many others.

The district covers Lycoming, Tioga, Northumberland and Union counties, among others.

Last year, PennDOT’s total operating budget was $367 million; however, this was somewhat higher than normal with the work being done on the Central Susquehanna River Valley project, according to Sandra Tosca, district executive.

Of that funding only 14 percent is covered by PennDOT workers. Most of the larger jobs, such as the major reconstruction work or replacement, is done by contractors.

Last year saw substantial flood damage in the area, and according to PennDOT officials, Lycoming County was the third hardest hit behind Bradford, and Sullivan counties, respectively. Of the $130 million spent in flood repairs for the state, $50 million was spent in those three counties alone.

“We really had a good chunk of it, along with our normal program,” said Tosca.

PennDOT officials covered projects expected to be completed through June 30, 2020; however, final project completion dates are subject to change with the Pennsylvania budget.

At the municipal line of Hughesville Borough and Wolf Township, work on the intersection between Route 220, Race Street, North Main Street and Reservoir Road is underway, but the majority of construction isn’t slated until next year, according to Eric High, assistant district executive.

Most of the work now is to prepare for that, such as utility work and building demolition will be conducted in 2019. The final cost is expected to be $2.9 million.

The Route 220 safety corridor construction is scheduled to start in October and is focused on eliminating any left-hand turns to create safer traffic flow. Input and correspondence from residents of Woodward and Piatt townships have led to changes in design, however there are no major changes to the schematics planned, barring contractor choices.

The project will be conducted in stages over the course of three years and will cost an estimated $36 million.

Four major milling and resurfacing jobs close to the city are expected to be completed by fall and will cause traffic disturbances.

From Interstate 180, starting at Route 15, to the Interstate 180 on-ramp in Montoursville, that 5-mile stretch will be milled and resurfaced.

Expected to be completed by fall 2019 and costing $3 million, the project will make use of time outside of peak traffic hours and will control the remaining traffic with lane restrictions and ramp detours.

There will be no lane restrictions for this year’s Little League season, according to PennDOT officials.

An 8.6 mile strip of Route 180, from Cemetery Road in Fairfield Township to the Muncy Creek bridges in Muncy Creek Township is expected to be milled and resurfaced for around $6.2 million. The project includes bridge repairs.

Motorists can expect lane restrictions to allow for the job’s completion.

A five-mile-stretch of Lycoming Creek Road, from Bottle Run Road to Route 973, will be milled and resurfaced for $3 million. Traffic will be brought down from two lanes going each way, to one and will be controlled through flagging operations.

The 4.6 miles of the Golden Strip will be milled and resurfaced as well, for $3 million. Construction on the busy road will be limited to night time lane closures with flagging operations.

project expected to finish in the fall, for $3.1 million. The last part of a phased operation, it will be completed using temporary travel lanes.

Route 287, from Elkhorn Road to Route 15, will be milled and overlaid for $1.2 million. Single-lane closures with a daylight flagging crew will control traffic.

For the The Central Susquehanna Valley Thruway project, which has been divided into the northern and southern sections, High said, “We’re progressing.”

The northern section is expected to be completed late 2021. The paving contract — which has come in over-budget due to changes to ensure a longer lifespan — has been awarded.

The southern section recently received environmental clearance. Construction is expected to start in 2022 and be completed in 2027, it was somewhat delayed as designers worked to find ways to avoid an ash basin.

Final design work is ongoing, with work related to right-of-way- acquisition, utility relocations, permitting and preparation of final plans and bid documents, is yet to be done.

The final cost for the project is expected to reach $865 million.

Reconstruction of the 2 miles of Duke Street in Northumberland County, from Eighth Street to Water Street, will continue through the 2019 construction season. The project, which started in 2017, is expected to complete in 2020 for $14 million. utilities and drainage upgrades are also slated to be completed at that time.

The widening of Route 11 in Northumberland borough that started in summer 2018, from the West Brach Susquehanna River bridge to Route 147, will also continue. This project is estimated to cost $3.8 million and will be worked on by reducing traffic to one lane.

The bridge in White Deer Township, Union County, that Route 80 crosses, will be replaced in the 2020 construction season for $3.8 million.