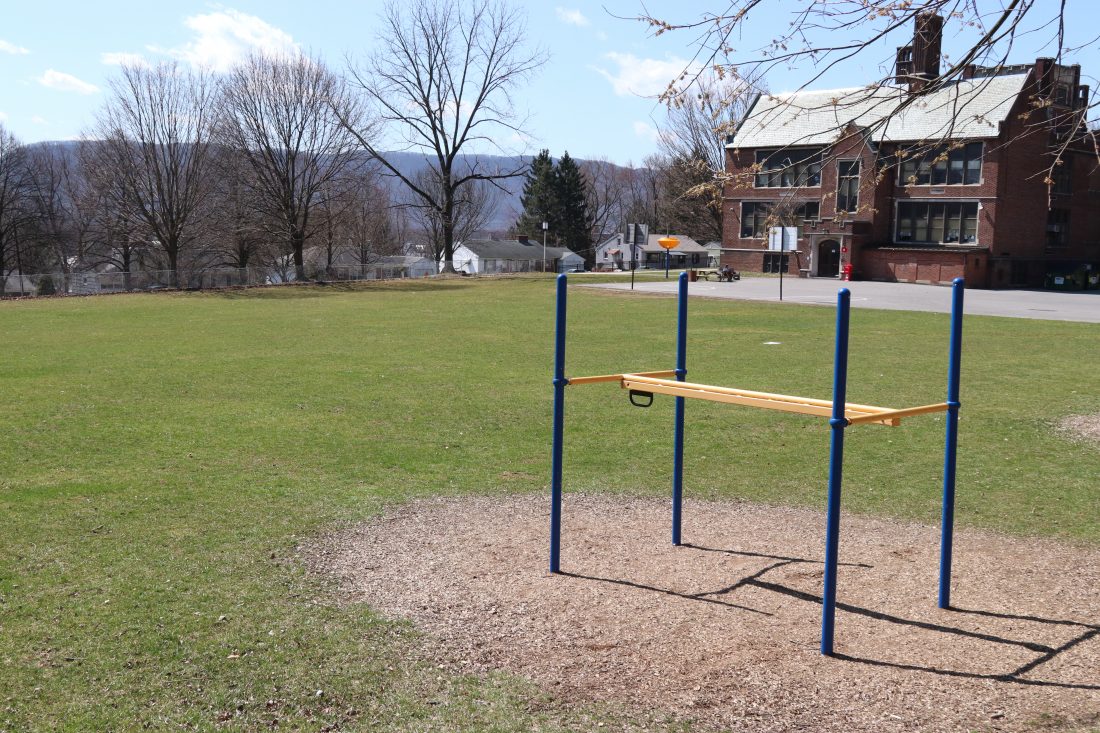 For children with cognitive or physical disabilities, finding a place to play that is not only accessible, but also conducive to the various needs of a child, isn’t always easy to find.

With this in mind, a group of people in the community have joined forces to bring an all-inclusive community playground to the city.

A site for the playground was chosen next to the Stevens Primary School, Louisa Street, on land owned by the school district, which has agreed to deal with the insurance, the maintenance, upkeep and security at the playground.

It is a central location and, according to Spencer Sweeting, a member of the steering committee for the project, an area that is both diverse and economically disadvantaged.

Another member of the steering committee, Dawn Astin, agreed. She also noted the children who live in that neighborhood and attend Stevens either walk to school or are dropped off at school. Astin, who is the business administrator for the American Rescue Workers, said about 83 percent of the students at Stevens qualify for subsidized meals.

Sweeting contends that playgrounds not only have the ability to change the lives of children in a community, but they also have the potential to change the community itself.

“It’s more than a place to play,” he said. “It can be transformative, changing how people view a neighborhood.”

He noted well-maintained playgrounds have potential to be one of the things that attracts a family to move to a neighborhood. It also can be a destination for families to give their children an opportunity to play.

The fact the playground is all-inclusive is a big deal, Sweeting said.

“There are parks that are accessible, but not all-inclusive,” she said. “It will bring all the children together in a healthy and safe environment. Disabilities disappear when they all play on the same equipment.”

Sweeting related about times when he and his wife have observed parents of children with diverse abilities bringing their children in wagons to a park only to find that the playground was not conducive to their needs.

He added it is important to provide an opportunity for all kids to play together because play is important.

Speaking as a member of the Lycoming County Brotherhood Alliance, Astin said she feels there is a real need for brotherhood in the way kids interact.

“They need to learn how to live peacefully and play side-by-side,” she added.

Because the city has had difficulties, at times, in maintaining the neighborhood parks, Sweeting said the fact that people in the community are rallying behind the project is particularly significant.

“The community is coming together around it,” he said.

A group of people in the community have planned a clean-up Saturday in and around the Stevens school neighborhood beginning at 8 a.m.. At 11:30 a.m., a 3-on-3 Basketball Tournament will be held at Firetree Place to benefit the playground project. From 12:30 p.m. to 6 p.m. a community celebration with food, crafts, educational opportunities and various activities is scheduled.

Another major fundraiser for the group “Boots, Barrels and Barbecue,” is scheduled for May 3, at the Genetti Hotel.

The total cost of the project is expected to be around $400,000. The group has already has secured a Matching Funds Hero’s Grant, leaving a balance of $292,000. Of that amount, $25,000 has been secured through donations and commitments, according to Greg Hayes, director of public relations/WASD Education Foundation.