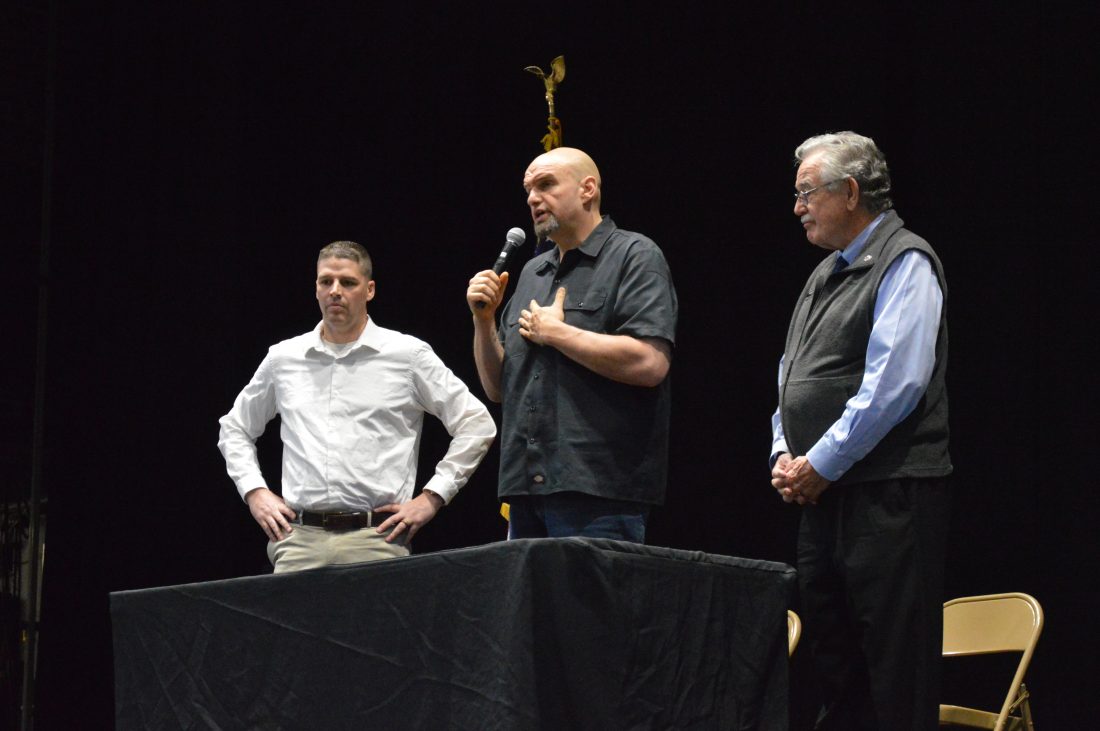 Out of more than 100 people who attended Lt. Gov. John Fetterman’s listening session on legalizing recreational marijuana for adults statewide at Mansfield University Tuesday evening, the vast majority indicated they are in favor.

During the hour-long session, 25 people of all ages and backgrounds shared their view on why marijuana should or should not be legalized for recreational use. Of them, 19 were pro-legalization – some with caveats, four were against and two were undecided.

Tioga County Commissioner Roger C. Bunn kicked off the session by stating he is against legalization.

“I’m always concerned about the unintended consequences of any decision that we make,” he said. “I’m not quite sure that we know yet the longterm effects. Yes, there could be a lot of revenue, but what are the social costs?”

Bunn said he will reach out to commissioners from states that have legalized recreational marijuana to get their views on any effects seen at the county level.

Another person against legalization said his research shows that states with legal recreational use have seen a rise in crime, unemployment and dependency on social services. If Pennsylvania allows up to six plants per household and each mature plant yields about a pound of marijuana, there will be no tax revenue for the state, he claimed.

“You cannot smoke six pounds of marijuana before it’s going to go bad,” he said. “You’re going to give it to your friends, you’re going to pass it out in society. So where is the tax money?”

The other two speakers against legalization agreed that Tioga County already is experiencing drug crises.

“Society is spiraling downward from a dependency on a number of things,” one said. “I would urge you to vote no for recreational marijuana.”

The two speakers who were undecided both called for more research, stating the longterm effects on individuals and on society are not well known. Further, it’s difficult to determine how impaired marijuana can make someone, one of them said.

“We don’t know how much is too much,” she said.

Arguments from those in favor of legalization included tax revenue benefiting the state, making it cheaper for people to use it medicinally and the possibility that regulating sales will make it more difficult for underage people to get it.

A Mansfield University student said he was given the option to use medicinal marijuana, but the required card would cost $200 plus annual fees.

“I could go to the doctor and be prescribed opioids for free with Medicaid,” he said. “That just does not sound right to me.”

Others talked about current laws ruining families and lives with large fines and even jail time.

“I spent 730 days of my life locked up with thugs, rapists and murderers because I had a handful of flowers,” another man said.

Some on the pro-legalization side said they hope to see revenue go toward specific goals, such as lowering other types of taxes, doing more research, drug rehabilitation or helping homeless or low-income individuals.

A Tioga County attorney, who owns a small business, said he pays about $48,000 per year to the state in various taxes on his business. He said revenue from legalizing marijuana could eliminate the need for or lower the taxes for small businesses, creating job growth.

“That’s two employees,” he said, referring to the taxes he pays. “In my opinion, legalizing marijuana will create job growth. That’s the first thing I’m going to do if I don’t have to pay that $48 grand to the state, I’m going to hire two employees.”

Overall, it seemed most who identified as pro-legalization wanted the state to be able to profit from something they felt shouldn’t have been illegal in the first place.

“I do believe in the pursuit of happiness and I do believe, if someone wants to smoke a joint in their own house or grow a flower in their yard, they should have the right to do so as long as they aren’t harming anyone else,” a speaker said, to much applause. “New York and New Jersey both are most likely going to legalize this. People are going to be driving over the borders … Let’s keep the money here.”