Most say ‘yes’ to legalizing marijuana 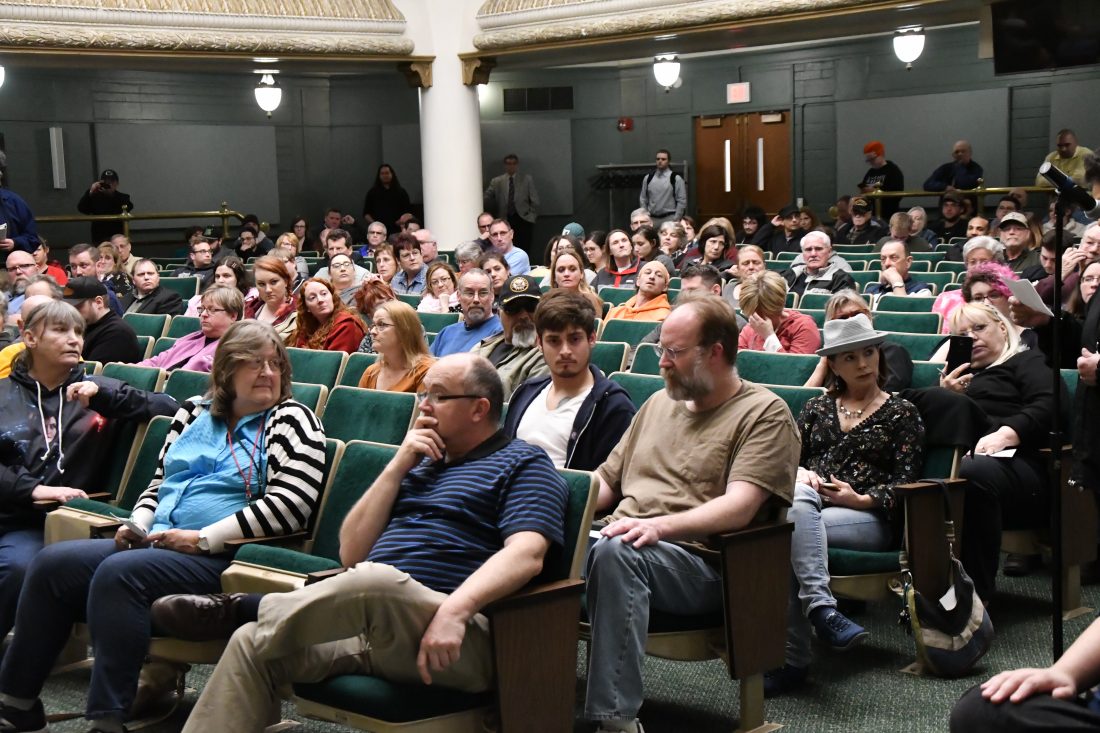 MARK NANCE/Sun-Gazette A large crowd turned out for Lt. Governor John Fetterman's listening on legalization of recreational marijuana in the state at Pennsylvania College of Technology Wednesday.

Dozens of people weighed in on the issue as Lycoming County became the 53rd of the state’s 67 counties to consider the legalization question.

“Our goal is complete, total transparency,” Fetterman told the crowded auditorium of the college’s Klump Academic Center. “We have to find what you think about it.”

Many people, whether pro or con, were eager to give their opinions.

Elicia McQuowan, of Montoursville said she was 100 percent in favor of legalization.

A former heroin user, she said marijuana helped her kick her opioid addiction.

She added that prohibiting marijuana use doesn’t work, just as prohibition of alcohol in the U.S. many years earlier didn’t work.

Richard Powell Jr., a Pennsylvania College of Technology student, said he suffered from a host of medical problems that have been helped by smoking marijuana.

He said enforcement of marijuana laws places too much burden on law enforcement.

Those in opposition to legalization included Williamsport attorney David Raker.

“I am not in favor of legalization of marijuana,” he said. “It is not harmless as its proponents claim.”

Raker pointed to research that the drug can trigger schizophrenia and psychosis in users.

He went on to say that evidence is “scant” as to the benefits of medical marijuana.

Father John Manno said he is also opposed to legalization. He said he felt marijuana can possibly be a gateway drug for young people and it affects motivation.

Williamsport/Lycoming Chamber of Commerce President Jason Fink said marijuana of today is much stronger than it was in the 1960s and 1970s.

He pointed out that marijuana use increases the incidence of accidents, injuries and absenteeism in the workplace.

“We have a hard enough time finding good labor,” he said.

Benjamin Kiessling said, “I think marijuana is an exit drug rather than a gateway drug.”

He said that legalization and regulation of the drug can help raise tax money for the state.

Bill Hall, of Williamsport, noted that nearby states have already either decriminalized marijuana or legalized it.

He said he has been advocating for legalization and taxation of marijuana for several years.

One woman said she was against legalization of all drugs except marijuana.

Her caveat, she said, is that it be smoked in the home and kept out of the hands of drivers.

Another person said it’s simply a gross exaggeration that everyone who smokes marijuana will be driving around high on the drug if it’s legalized.

He said marijuana should be legalized and regulated like alcohol.

Lycoming County Commissioner Rick Mirabito said he was a bit surprised that the audience showed such strong support for legalization.

He called the issue a complex one.

“I think it’s important that we have a civil conversation about it,” he said.

Mirabito said his one concern with legalization is the effect marijuana may have on brain development of young people.

“The last thing we want to do is create impairment,” he said.