Mother 2nd in generation to give birth along road 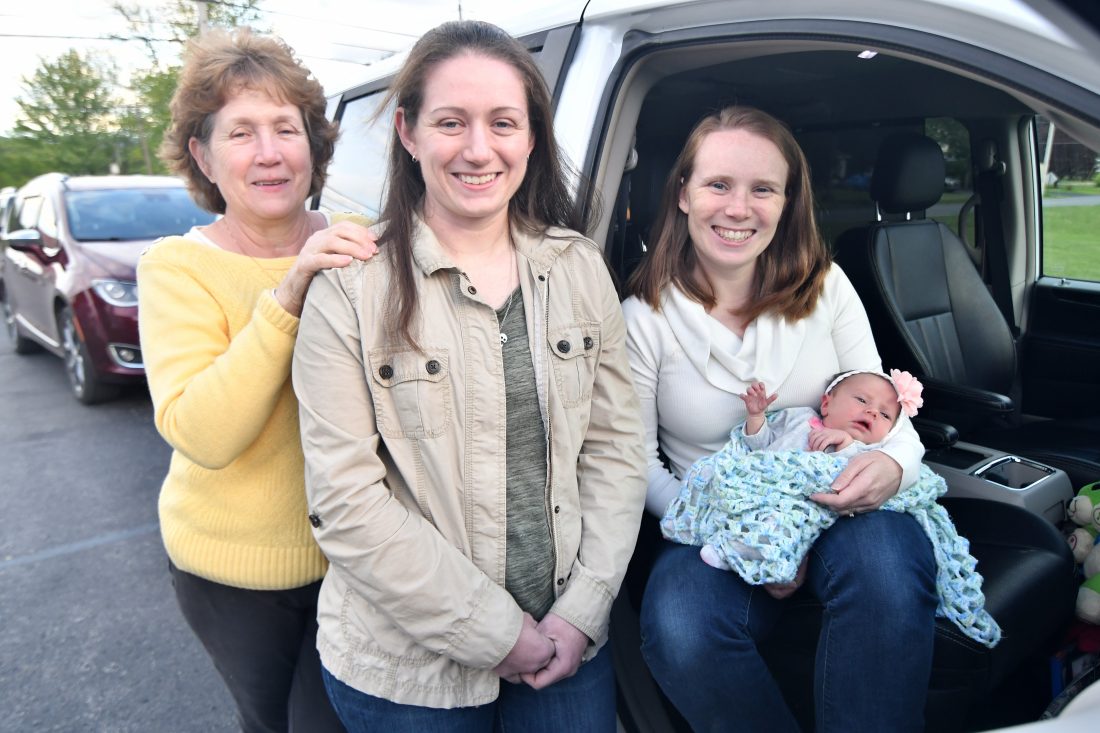 MARK NANCE/Sun-Gazette Amy Ringkamp, right poses with her one week old daughter Madeline after giving birth to her in her van. Her sister, Kelli, middle, was also born to her mother Jan Smith in the family van. All are from Montoursville.

To most, it only happens in the movies, but for Amy Ringkamp and family, it became their reality on May 6 as they welcomed Madeline Ringkamp, the newest addition to their family, into the world. Ringkamp and husband found themselves not only surprised by the gender, as they guessed they were having a boy, but also by the location of the birth in the passenger seat of their car, pulled over on the side of Interstate 180.

On Monday, Ringkamp was in her home when her water broke. Immediately, she called her husband, Scott, and emphasized that he needed to get home from work quickly as she could feel the baby was coming fast. After twelve minutes, Scott was home and they were packed in the car heading for the hospital. Just two short minutes into the car ride, the Ringkamps were pulled over on the highway with Madeline safe and sound in her father’s hands, who got out just in time to catch her feet.

“It happened so fast, my husband was a little stunned,” said Ringkamp. “He asked me some silly questions like ‘How do you call 9-1-1?’ “

Following the whirlwind of a birth, the doctors at the hospital said to continue on their way to them. With a crying infant on Ringkamp’s chest, Scott back behind the wheel, and Benjamin snacking away on a pack of Sour Patch Kids, the family was off to the hospital.

“I put her right up on my chest and luckily she started to cry. She was doing well, a little chilly so when we got to the hospital they had to warm her up a little and give her some sugar,” said Ringkamp. “It was funny, they all came out of the entrance with the wheelchair very chatty and shocked at what happened.”

Safe in the hospital, Ringkamp called her sister, Kelli Smith, and mother, Jan Smith, to tell them about the birth knowing it would be hard for them to believe her story.

“When I called my family, particularly my mom, she thought I was joking,” said Ringkamp through laughs. “She kept saying ‘No, you’re kidding. Start over, what happened? What do you mean?’ They were waiting for us to tell them we are going to the hospital and to have them take care of Ben, so when I called them and said she was already born they were shocked we did not tell them we were going. I had to explain that I never really got there.”

Not just shocked by the craziness of the story, but also because 30 years prior, Jan Smith gave birth to Ringkamp’s sister in a car outside of the Williamsport Medical Center. Ironically, both Ringkamp and Smith gave birth to their second child in a car rather than in the hospital.

“We warned my other sister, who has just one child, ‘if you have a second one you better watch out if it is a family trait,” joked Ringkamp.

After much convincing, as no one believed her at first, the family all arrived at the hospital to see the new addition. Ringkamp’s parents were convinced it was not actually true Ringkamp gave birth in the car and kept asking Scott to tell them what actually happened. Her sister who just drove by the house as the family was leaving for the hospital couldn’t believe how fast it all happened. But honestly, even Ringkamp was still in disbelief.