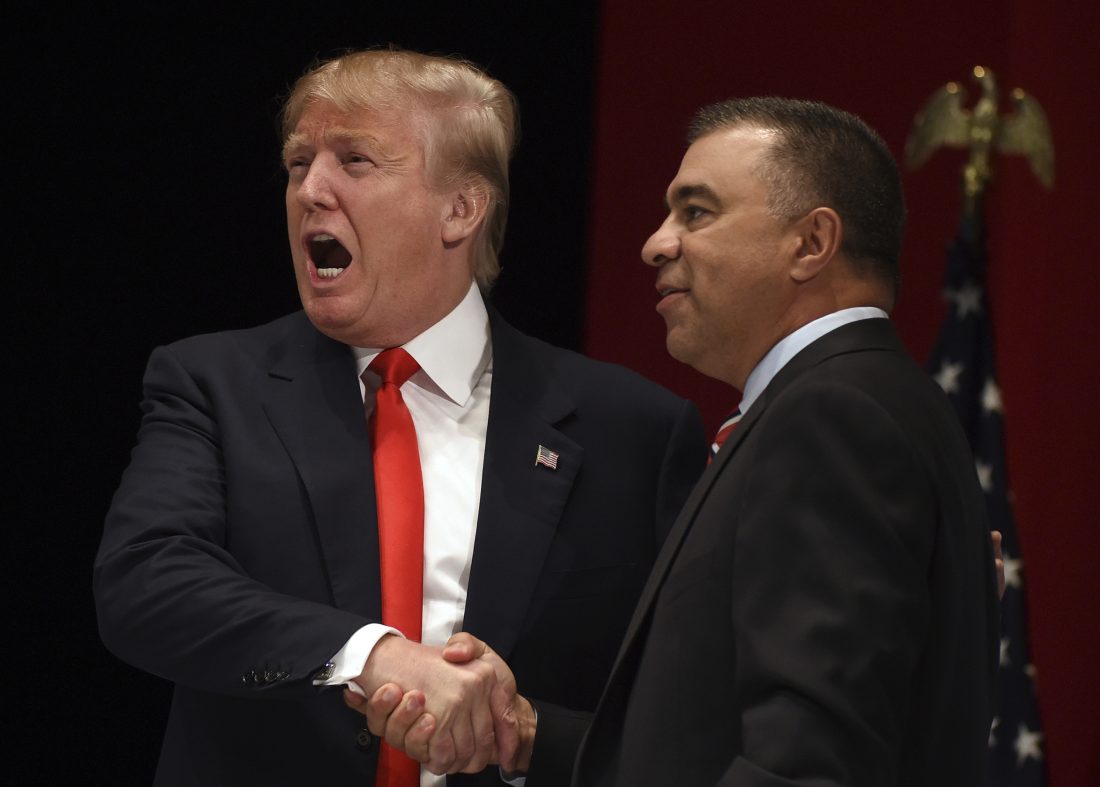 FILE - In this Saturday, May 9, 2015, file photo, Donald Trump, left, reacts to the crowd as he shakes hands with co-host David Bossie at the Freedom Summit in Greenville, S.C. Two members of President Donald Trump's 2016 campaign said Thursday, May 9, 2019, that former Vice President Joe Biden would present the toughest 2020 challenge for the president, though they disagreed on whether Biden can first win his party's nomination. Former Trump campaign adviser Bossie believes Biden will be the Democratic nominee but said he wishes it would be Vermont Sen. Bernie Sanders, who identifies himself as a democratic socialist. (AP Photo/Rainier Ehrhardt, File)

President Donald Trump will come to Lycoming County next week as part of a campaign stop for Republican House candidate Fred Keller.

Trump will speak at 7 p.m. at the Williamsport Regional Airport, in Montoursville, Monday.

Keller is running against Democrat Marc Friedenberg in a special election in the May 21 primary to fill the vacant 12th Congressional seat formerly held by Republican Tom Marino.

“I’m excited to welcome President Trump for his first visit to the 12th District during his Administration and to highlight the work he is doing on behalf of every Pennsylvania family,” Keller said. “President Trump’s leadership has led to more jobs, a stronger military, increased care for our veterans and a booming economy. I look forward to helping the President keep these accomplishments going and fight for every Pennsylvanian in Congress.”

Marino said, “It’s good to see him (Trump) come to Pennsylvania. We want to keep that seat.”

He noted Pennsylvania could also prove to be an important state for Trump in next year’s presidential election.

Others are not so happy about Trump’s visit.

“As I have traveled around the district, I hear about pocketbook issues more than any other: the need for good paying jobs, the high cost of health care, better education for children and protecting Social Security,” he said. “The fact that Fred Keller is appearing with President Trump in support of President Trump’s Tariff War, only signals how out of touch he is with the residents of the district and his inability to challenge his party’s leadership.”

Tickets for Trump’s appearance are at https://www.donaldjtrump.com.

Final details are still being worked out, he said.