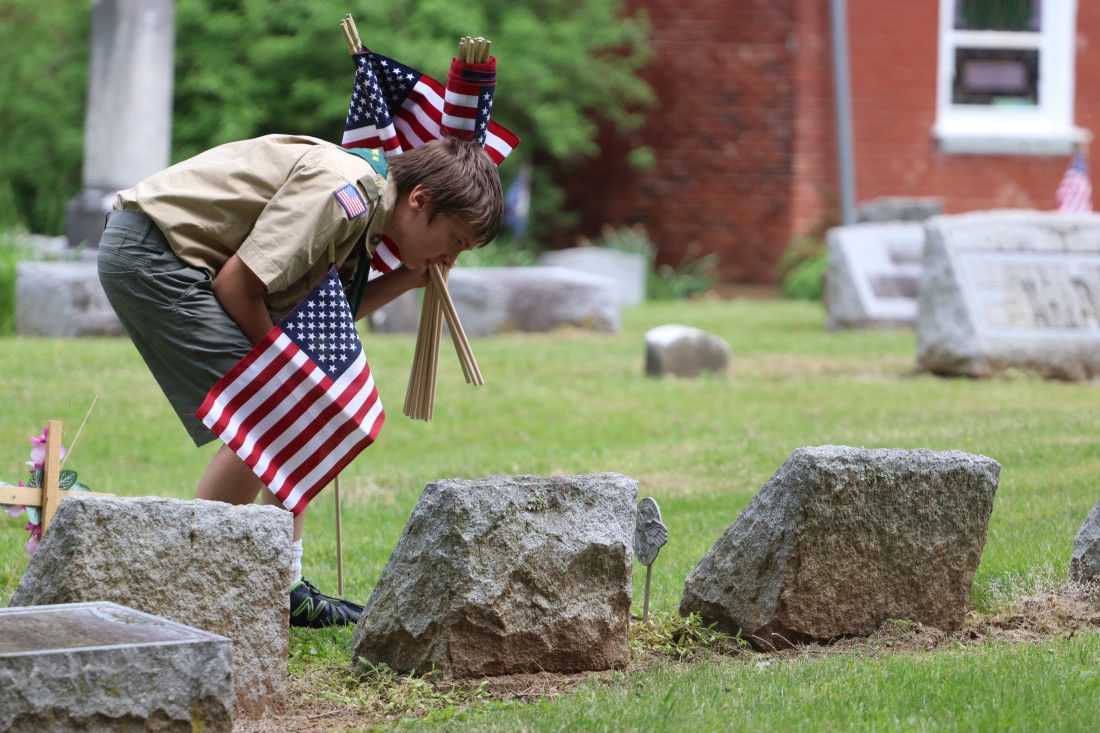 KAREN VIBERT-KENNEDY/Sun-Gazette ??????, a member of Boy Scout Troop 26 from Hughesville, places a flag on a veterans grave in preparation for Memorial Day, at Pleasant Hill Cemetery in Hughesville on Sunday May19, 2019. The flags are placed with the cooperation of American Legion Post #35 of Hughesville. Abouta dozen scouts came out to place the flags along with members of the legion. The American Legion Post #35 supplies the flags to this cemetary and other cemeteries in the Picture Rocks, Hughesville area.

Memorial Day — a time set aside for a nation’s boundless gratitude for the ultimate sacrifice paid by Americans in defense of the United States.

Originally called Decoration Day during the years after the Civil War, the name Memorial Day was not given until it became a national holiday during the administration of President Richard M. Nixon.

Today, those across the West Branch of the Susquehanna River valley celebrate it on the weekend ahead of Monday, with many heading to city and community swimming pools that are opening or to a cemetery to place an American flag beside a grave.

The service will feature a partial unveiling of the latest monument, a wall with stone pedestals that will hold six black granite monuments marking wars between American Revolution and Spanish-American War, or pre-World War II, said John Markley, project director and retired Army master sergeant who is secretary of the Veterans Memorial Park Commission.

The service begins at 11 a.m. with a welcome by the president of the Lycoming County Veterans Council Inc.

Marine Lt. Gen. Earl B. Hailston, who spent more than 35 years in the service, is the keynote speaker.

After enlisting in 1967 as a rifleman, Hailston served in the Vietnam War and in his last tour he led the Marine component for Central Command into Afghanistan and Iraq. During Operation Iraqi Freedom he commanded the largest Marine force since World War II, according to Michael McMunn, service master of ceremonies.

“It’s our tribute to the fallen Americans of the past wars whose names are forgotten mostly,” said Chuck Smith, a Marine and Korean War veteran on the commission.

To fund the monuments and build the wall and pedestals that hold them, the commission continues to sell bricks, some of which are put down in front of the wall to make a pathway. The bricks may be engraved with loved one’s names in their memory.

The service is expected to begin with a welcome by E. Raimund Fairfax, president of the Lycoming County Veterans Council Inc., and a Vietnam War veteran who served in the Air Force.

Nick Biddle will sing the National Anthem and Donald Lomison, chaplain of the Korean War Veterans of Lycoming County PA Inc. will give an invocation. Biddle also will be the vocalist for the day.

Also expected to take place at the service are songs by vocalists, and the traditional honor guard rifle salute and laying of wreaths, along with cannon firing by Thompson’s Independent Battery C, Wilt said.

Across the region, municipalities up and down the Susquehanna River valley hold solemn and thought-provoking services, parades to spark patriotism and special events to mark the holiday.

Besides these public events, Memorial Day and the weekend are when picnics are held celebrate the reunions of friends and family and honor the freedom the men and women of the U.S. Armed Forces have guaranteed.

The following are a list of public Memorial Day and weekend events as provided to the Sun-Gazette:

• Parade in Sonestown, 10:45 a.m., with the marchers proceeding to the Hillcrest Cemetery for a service and luncheon following at the American Legion Post 601.

• Parade, at Picture Rocks borough, 1:30 p.m., followed by a service at the Picture Rocks Cemetery with Steven Runyan, guest speaker.

• Service, 6 to 9 a.m., Jersey Shore Veterans Council Inc. Lost at Sea, 6 a.m. at the Route 44 bridge, followed by a procession to the Veterans of Foreign Wars and American Legion posts for remarks and the slow march to the Jersey Shore Cemetery for 9 a.m. service.

• Service, 9 a.m., at Wildwood Cemetery Grand Army of the Republic Circle. The ceremony will be conducted by members of the 11th Pennsylvania Volunteer Infantry in period uniform.

• Parade, 9 a.m., with a start at the fire station and ending at the Hughesville High School. Service to follow the parade at Pleasant Hill Cemetery, with Lonnie Spicher, guest speaker.

• Parade, 9 a.m., at the Watsontown Cemetery that ends with a ceremony on the Hellen Fairchild Bridge.

• Parade, 10:30 a.m., Wellsboro, at The Green, which proceeds to the cemetery, where a service will take place by the American flag to recognize and pay respect to those who sacrificed their lives.

• Parade, 11 a.m., Salladasburg with patriotic floats, decorated vehicles, antique cars and tractors and bands. Service to follow at the Salladasburg United Methodist Church. Parade include patriotic floats or decorated vehicles; antique cars and tractors; kids on decorated bicycles; riding horses that can be controlled in a parade setting; Scout Troupes, Girl Scout Troupes, Little League Teams and military service members. Those that want to be part of the parade should be in line on Dochter St. before 10:45 am. The parade will be led by the Jersey Shore Area High School Marching Band and will also include fire engines from both Jersey Shore fire companies. Immediately following the parade there will be a ceremony to honor the local veterans. The ceremony will take place in the Salladasburg United Methodist Church Parking lot. The invocation will be done by Pastor Kevin Brophy. The National Anthem will be sung by Rebecca Barrows. Dr. Daniel Glunk will recite Lincoln’s Gettysburg Address and then the roll call of the veterans will be read by Mayor Douglas Ellsworth, followed by taps and a 21 gun salute by The Jersey Shore Honor Guard.

• Cruises 1 to 4 p.m., Susquehanna State Park, cruises free of charge for active duty and retired veterans on the Hiawatha Paddlewheeler Riverboat at 1 p.m., 2:30 p.m., or 4 p.m.