Although chance of rain lingers, a dry break will grace the week 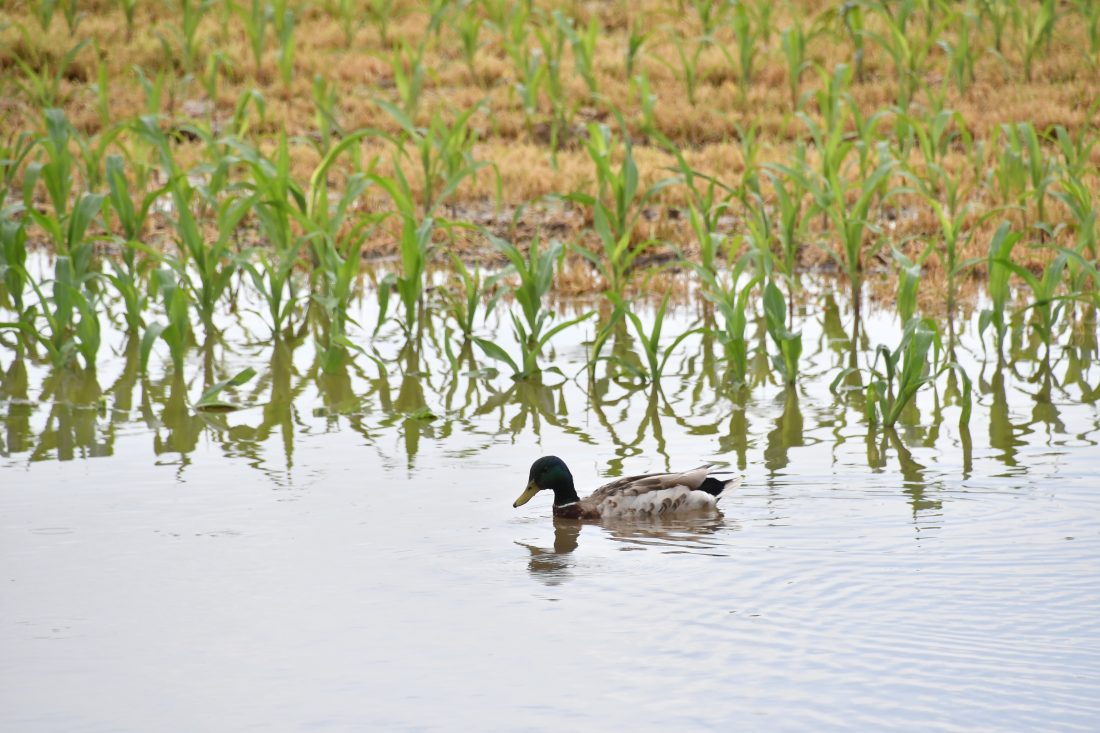 MARK NANCE/Sun-Gazette A male Mallard swims among stalks of corn at the corner of Pleasant Valley Road and Rose Valley Road Wednesday. Due to the high rainfall over the past year, a seasonal puddle has turned into a small pond with occasional visitors.

After last week’s slew of storms, lingering chances of rain will hang on throughout the week, but there could be time for the area to regroup under sunshine and typical summer weather.

With a relatively dry and warmer week ahead, there’s a chance that the highs could be reaching close to 90 by the end of the week, John Banghoff, a meteorologist at the National Weather Service, in State College, said.

Although there could be some storms moving through, the week is looking very different from the seemingly consistent rainfall that appeared last week, he said.

With that, Williamsport topped the average amount of rain for a month in less than one week, Banghoff said.

This upcoming week, the expected amount of rainfall is approximately 1/2 inch with a stretch of dry days with slim chances of rain overnight.

Monday’s expected high is 81 degrees with a low in the morning in the mid-50s. Although there’s a slight chance of rain, it doesn’t look like it’s going to be coming anytime before 8 p.m., Banghoff said. That chance of rain will continue until around midnight, he said.

Tuesday this week is expected to have a high of around 86 and a low of 67 with lingering showers in the morning. Unlike the rest of the week, Tuesday will have more scattered showers and cloudy skies.

Wednesday through Friday’s humidity rates will be higher, but with warm air and sunny skies.

With a high of 86 and a low of 63 on Wednesday, the humidity will be on the rise, making it one of the most humid days of the summer thus far.

A low of 65 will potentially bring in some lingering showers Thursday morning, but that storm should taper off and turn into a pretty nice day with warm weather and a high of 87, Banghoff said. Friday will look similar, with lingering showers, but it’s expected to be the warmest day of the week with a high of 88 and a low of 64.

As a cold front and rain move in, Saturday and Sunday are going to have a higher chance of rain and some clouds.

Saturday is expected to have a “decent chance” of rain with a high of 86. The clouds throughout the day will increase and the rain is said to go through the afternoon. For Sunday, the high of 80 and low of 63 bring a breezy day with relatively nice weather and decreasing clouds, said Banghoff.

“This week is going to be a nice breath of fresh air,” said Banghoff.