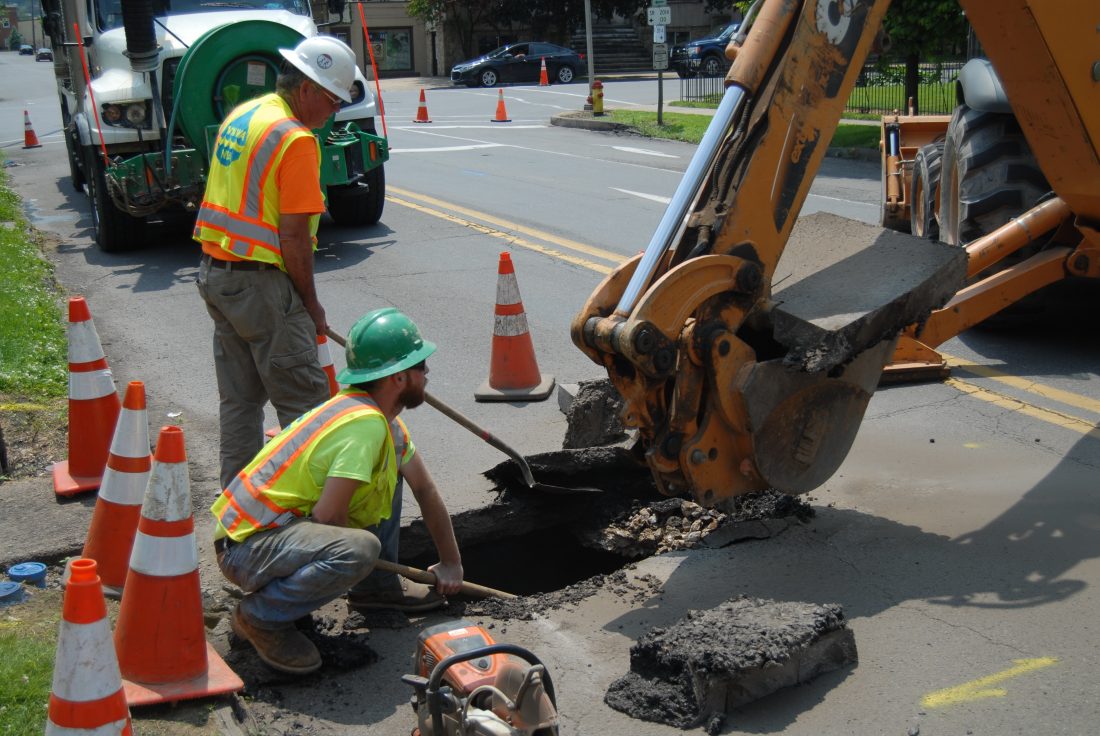 A 42-inch broken sewer pipe under Campbell Street was the cause of a 15-foot-deep sinkhole between Third and West Fourth Streets, according to the city’s Water and Sewer Authority.

Workers reported the sinkhole at around 12:40 p.m. Friday.

The road will be closed during normal day hours, and will be covered at night by a steel plate to allow normal traffic flow during off hours.

Residents reported the gradual sinking to the authority, who had to cut an approximately 5-by-3-foot opening into the pavement to match the diameter of the erosion.

Crews discovered the 15-foot hole to reach entirely to the pavement — only a 10 inch layer separating a vehicle from “disaster,” according to workers.

“The top of the sewer probably collapsed and what probably happened is the water infiltrates into the ground, and the sewer takes it away,” he said.

The sewer had washed away about 225-cubic-feet of gravel, dirt and rock, which exposed electrical, water and gas lines. UGI was on scene to investigate as well.

Soon after observing the extent of the sinkhole, Dave Gutelius Excavating, of Mifflinburg, was contacted for assistance, according to Michael Miller, executive director of WSA.

“They’re one of our emergency contractors. If the project is something that we can’t handle in-house, they respond and help us out with the project,” Miller said. “This one was deeper than we are able to accommodate, and we had to bring them onboard.”

Though Miller said he can’t be sure at this time, he suspected the large sewer pipe deteriorated over time.

“There’s no (state Department of Environmental Protection) violations as of yet, everything seems to be flowing well. We’re going to ensure it flows well and is back in order,” he said. “It looks like a pretty big project, but we’re hoping to have it buttoned-up by (Saturday).”

Whether the pipe will be completely replaced or clamped will be up to the excavating organization.

Once the pipe is fixed, the eroded pit will be backfilled and the pavement will be restored, he said.